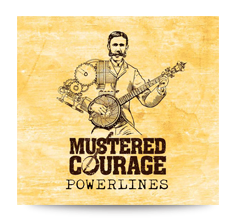 And now, thanks to Mustered Courage, I've discovered bluegrass in Australia. Cofounders Nick Keeling and Julian Abrahams moved from America to Melbourne in 2009, and after flirting with hip-hop for a while, they decided they wanted to express their love for rapid-fire bluegrass music. Nick's uncle was a member of The Geezinslaw Brothers, who opened for Elvis and appeared on The Johnny Carson Show, so you might say the tradition was in the blood. The two young men rounded out their group with Paddy Montgomery and Josh Bridges. Their first album finds them tweaking a sound that one early reviewer said is "the link between Bill Monroe and Mumford & Sons."

Though Mustered Courage explores the new roots movement, they are more strongly rooted in bluegrass than Mumford & Sons. The opening number on this CD, "Standing by Your Side," sets an upbeat bluegrass atmosphere with a simple lyric -- "Let it rain on me / I don't mind / If I'm standing by your side." There's lots of picking (banjo, guitar, and mandolin) over a firm string-bass foundation. The final cut, "Still Shinin'," is a bluegrass ode to moonshine. In between there are excursions into unaccompanied folk ("Towin' the Chain"), a railroad song ("Old Steam Train"), a wailin' high-and-lonesome ballad ("Cruel Alibis"), several more folk and roots numbers ("My Hometown," "Southern Style"), and a virtuoso instrumental ("Allegheny"). The latter song proves that these fellows from down under can pick and strum with the best of them.

Mustered Courage was recorded in fairly close-up sound that has tremendous presence. There's wide stereo separation, but no player sounds stranded out in leftfield. The only thing I'd change is to make the vocals a wee bit more prominent because at times the great playing covers up the words.

What really amazed me about Mustered Courage is how much they have matured and improved in a very short time. Go to their site, where you can find videos from the time the band was just the two founders all the way up to the latest full-roster clip in full 1080p HD. The improvement is dramatic. If this band keeps pushing themselves to become better, they'll be one of the best bands in any land, Australia and the United States included.

Be sure to listen to: Listen to the accompanying picking on "Miss My Ways." It's totally virtuosic playing that still fits in with the vocal line. The instrumental break in the middle lets it come to the fore, along with some nice fiddle playing.