Stevie Nicks: "In Your Dreams" 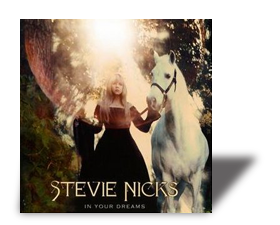 In Your Dreams, Stevie Nicks's first new solo album in a decade, is part memory, part mystical, and part contemporary, with the parts adding up to a very successful whole. The veteran queen of rock has been performing for over 40 years, yet her voice sounds just as it always has, with that immediately recognizable rasp adding character to every note. Nicks knows her voice, both its strengths and weaknesses, so she knows how to use it without making any missteps. Though she can often seem aloof and detached onstage, Nicks seems fully involved in every song on this CD.

The songs are varied, most featuring lyrics Nicks wrote, or as in the case of "Annabel Lee," lyrics she adapted. Nicks also wrote most of the music, with some tracks penned by the album's producer, Dave Stewart, who sings a duet with Nicks on the last cut, "Cheaper Than Free." I liked "New Orleans" best, in which Nicks sings of hope for a city all but destroyed by Hurricane Katrina while giving a nod to the types of outfits fans have come to expect of her: "I wanna dress up, I wanna wear beads, I wanna wear feathers and lace, I wanna brush by the vampires." Next for me would be the hollow and empty-sounding "Soldier's Angel," which makes a statement about war and alludes to Nicks's work in veteran's hospitals, where she has provided wounded military men with autographed MP3 players loaded with her favorite music. I also liked the conciliatory title song.

Scattered in and among these three are the supernatural and evocative "Annabel Lee," from Edgar Allen Poe, and "Moonlight (A Vampire's Dream)" inspired by the Twilight series of novels and films. In a world where music is mostly being downloaded a song at a time, the album has all but disappeared. This disc, however, has a carefully thought-out order and pacing that makes it a satisfying program as an album concept. The production is clean and clear for the most part, though once in a while, as in the title song, the sound becomes thick and overproduced. There's a long list of supporting musicians, which indicates recordings done over a period of time, but the smooth production makes it seem like they were all put together in the same afternoon.

Be sure to listen to: "Soldier's Angel," with its sparse scoring, is the best place to hear Nicks's voice. After a guitar intro, Nicks enters, and effective drumbeats carry you up to the chorus, when the backup singers join in for emphasis. It's what the folks over at Linn Records in Scotland like to call acid folk. A-plus acid folk, I'd add.