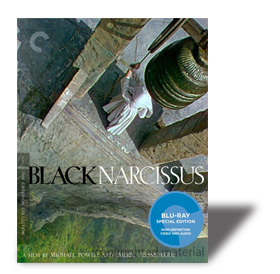 Filmmakers Michael Powell and Emeric Pressburger forged one of the most important partnerships in the history of film by founding their production company, The Archers. From 1942 to 1957, they made 19 feature films, including the masterpieces Black Narcissus, The Red Shoes, and The Tales of Hoffman. 1947’s Black Narcissus, based on Rumer Godden’s novel, tells the story of an order of nuns who are sent to run a school and establish a mission in a community perched high in the Himalayas. The spot they occupy was once a lavish brothel, and the walls still hold many murals that suit that sort of organization. The nuns, led by Sister Superior Clodagh (Deborah Kerr), believe they can conquer the past and give the community a different future, but they quickly learn that the location’s hedonist history won’t easily fade. Worldly sins are manifested in Mr. Dean (David Farrar), a swarthy man of the world. Sister Ruth (Kathleen Byron) becomes so conflicted by this man’s presence that she leaves both the order and her senses.

For this movie, Powell and Pressburger worked with cinematographer Jack Cardiff, who won an Oscar in 1947 for his opulent photography. The colors vary from rich to subdued, but they always have life and presence, and they’re indispensable in setting mood and suspense. The sharp Criterion transfer preserves the supercharged nature of the film, which, by the way, was shot entirely on sound lots in the UK! The audio tracks are quite good for the period, though they show age more than the video. Constant wind successfully suggests altitude, and Brian Easdale’s huge symphonic score is performed by no less than the London Symphony playing it. Powell considered the score so important that he shot many scenes to correspond to the music, rather than vice versa. The optical mono track seems inadequate to reproduce the score at times, but overall it works with the visuals to create atmosphere, and the dialogue is very well served. One can only imagine how awful this optical track must have sounded before Criterion restored it!

The extras seem a bit slight for a Criterion release, but they’re quite good. There’s a commentary track with Martin Scorsese and Powell, recorded shortly before Powell passed away. There’s also a video introduction by director Bernard Tavernier, who also contributes “The Audacious Adventure,” a video piece in which he discusses Powell and the film. “Profile of Black Narcissus” is a half-hour documentary on the making of the movie, and “Printing with Light,” perhaps the most interesting extra included, examines the luminous, award-winning work of Cardiff. There’s also a 24-page booklet with an in-depth essay by Kent Jones and superb color photos of the film’s main characters.

Black Narcissus is one of the most important films in cinema history, as well as one of the most entertaining. Though they were prohibited from showing much at the time, the filmmakers perfectly convey a supercharged sense of repressed sexuality, and they make delicious suspense and melodrama out of the havoc that feeling creates.

Be sure to watch for: There are many memorable images in this very visual movie, but the one that stands out for me is at the end when Sister Ruth, dressed in secular clothes, bursts from her room bent on killing Sister Superior Clodagh, who is ringing the assembly bell at the edge of a frightening cliff. Her hair is wet and disheveled, her look maniacal and menacing. No villainess in film has been scarier.