Produced in Spain in 1972 for a measly $300,000, Horror Express has received terrible treatment since its release. It flopped in Spain but was better received in the UK, where it got excellent reviews. The US release was a disaster. The distributor had so little interest that it provided misleading poster art and, according to some reports, released a workprint to theaters.

Over the years, there have been various releases of Horror Express on VHS and disc, all of them looking washed out. View the original trailer included on this new edition from Arrow Films and you’ll get an idea how bad it looked and sounded. This film is one of my faves, and I despaired of ever seeing it as the director originally intended it to be seen. Thanks to Arrow’s new 2K restoration, my wishes have been fulfilled.

Director Eugenio Martín, here credited as Gene, was fortunate to have three name stars to direct: Christopher Lee, Peter Cushing, and Telly Savalas. Horror Express was dubbed into English, and it’s rumored that one woman voiced all of the female roles. But Lee, Cushing, and Savalas all did their own dubs, and their voices are immediately recognizable.

Part of the film’s charm is that it pays homage to so many different genres -- horror, science fiction, mystery, adventure. The setting, aboard a trans-Siberian express train, references The Lady Vanishes and Murder on the Orient Express, and the whistled main theme of John Cacavas’s score is reminiscent of a James Bond or other spy film of that era.

Horror Express begins with Prof. Sir Alexander Saxton (Lee) discovering what seems to be the mummified corpse of an ancient hominid -- some sort of missing link -- entombed in a cave. Against all advice, he plans to transport it to England. It’s put in a cage, and it quickly -- at least to the audience -- becomes apparent that it’s alive. So far, a horror flick. But soon we’re in the world of science fiction as we realize that this apparent artifact is actually a creature from outer space that can shift its shape. Here the film tips its hat to John W. Campbell’s Who Goes There?, the novella that served as the basis for The Thing from Another World (1951) and John Carpenter’s The Thing (1982). Needless to say, the shape shifting causes plenty of trouble -- lots of bodies are racked up before the breathless ending. 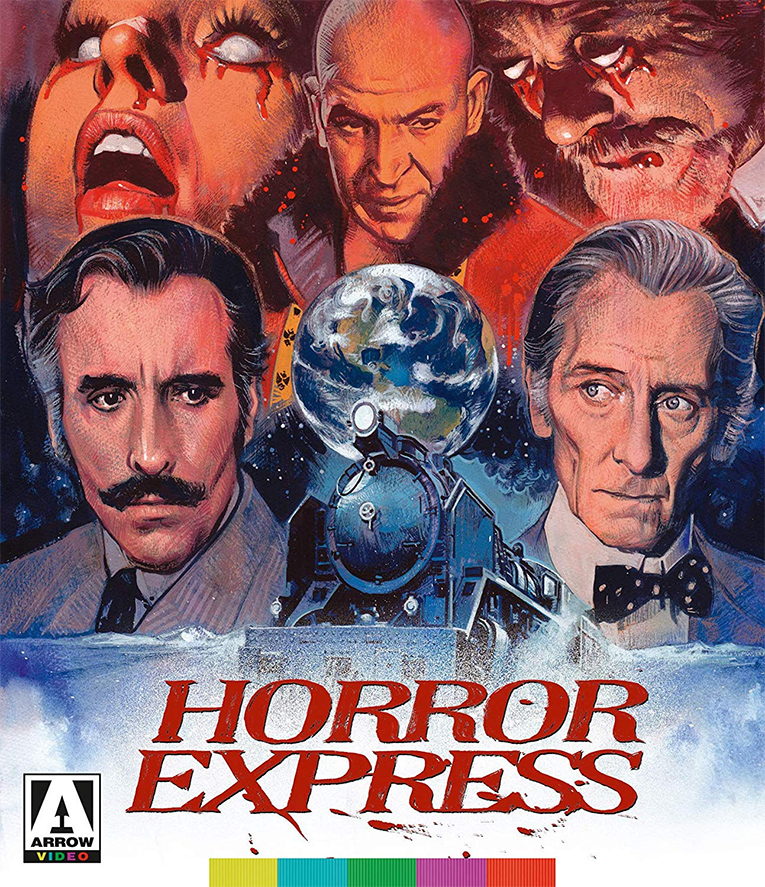 Lee and Cushing (Dr. Wells) were trained as classical actors, and that training sets the tone for the first two-thirds of the film. And just when it needs a boost, Savalas appears as Capt. Kazan, a crazy Cossack with his just-as-crazy men. Savalas ad-libs shamelessly in a memorably over-the-top performance. One of the extras in this edition reveals that Savalas and Cacavas were lifelong friends -- early on, the actor helped the composer find work, and Cacavas (1930-2014) went on to have a long career as a composer for television and an occasional film.

The video transfer is excellent. Colors are exceptionally rich, without any bleed. The tweed of Cushing’s jacket and the checked pattern of Lee’s are perfectly rendered, sharp and crisp. The early-1900s interiors of the train itself -- wood paneling, patterned carpets, tasseled curtains -- look superclean and clear. There’s lots of quick cutting between headshots, and these clearly show differences in complexion and eye color. The soundtrack is clear and clean; the dialogue is easy to understand, and the music is only slightly distorted, with big climaxes -- in short, it sounds quite good for its age.

I found the Savalas-Cacavas extra the most interesting, but there are lots of others, including informative interviews with director Martín and horror fan and film journalist Chris Alexander, plus a new audio commentary by film critics Stephen Jones and Kim Newman. Blacklisted producer Barry Gordon narrates an informative and personal documentary about the McCarthy era. The case’s reversible jacket features original poster art and a new cover by Graham Humphreys. Buyers of copies of the first pressing also receive an illustrated collector’s booklet with new writing by Adam Scovell.

It’s grand to see a cult favorite given the treatment it richly deserves, and that’s what Arrow has done with Horror Express. All aboard for a shape-shifting adventure that will keep you on the edge of your seat!

Be sure to watch for: The glowing eyes of the transformed creature could be done in a snap using special effects, but in 1972, for this film, they were made to glow with hardwired contacts. Even today, the effect is terrific -- but because, when wearing these contacts, the actors could see nothing at all, these scenes had to be precisely choreographed.