"It Happened One Night" 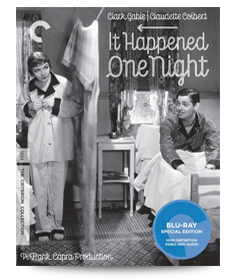 Frank Capra filmed It Happened One Night in four weeks on a budget of $300,000, with a sixth of that going to Claudette Colbert's salary. Even adjusting for inflation, it's a remarkably small budget as Hollywood goes. No one expected the little film to stay around or be anything important. Surprise! It Happened One Night swept the top-five Academy Awards (Best Picture, Best Actor, Best Actress, Best Director, and Best Screenplay) and became the granddaddy of all romantic comedies. Other comedies have come close, but 81 years down the road there are still none that are better.

Colbert plays Ellie, a rich society girl who is on a bus running away from her possessive father. She runs into Peter (Clark Gable), a recently fired newspaper reporter and boozer. The two engage in a banter of wits and quips that lets the audience know right away that they're falling in love. The characters, however, take a little longer to catch on, and it's fun to watch them maneuver around it. When they finally do get together, the audience breathes a sigh of relief and goes home happy.

From some of the stories in the extra material included with this Blu-ray, I learned that Colbert didn't want to make the movie, and that's why she doubled her normal $25,000 fee. Gable was happy to get away from MGM and the tough-guy gangster roles he'd been handed. Somehow, something happened (Frank Capra happened), and the chemistry between Gable and Colbert became striking. Throw in some very colorful character actors in lesser roles and you have one of the best pictures ever made.

Two scenes have become iconic. One is the scene that finds Ellie and Peter in a campground cabin. He strings a rope from wall to wall, hanging a blanket on it, while calling it the "Walls of Jericho." They will each reside in a single bed protected by the "wall" in the middle, and Peter assures Ellie that unlike Joshua, he has no trumpet on hand to bring those walls down. The other is the hitchhiking scene where Peter tries to flag down a ride with his "magic" thumb and is passed by every vehicle. Ellie asks to try, and she sticks out her bare leg and snares the first car. Later she quips about the limb being more powerful than the thumb. 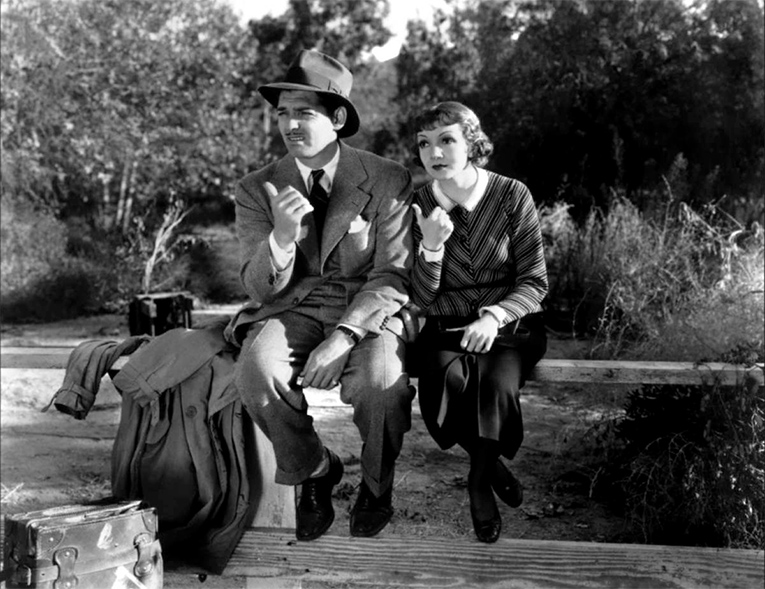 One of the most remarkable qualities of this movie is the magnificent lighting. After the lights go out in the cabin scene, the characters on either side of the makeshift wall are bathed in light from the windows, and Ellie's eyes simply shine. It's all there with its original intent, thanks to a fine print from Columbia and Criterion. The shadow detail is just right, and the bright light images are crisp as can be. It's really hard to believe that this movie was made in 1933 and released in 1934! The soundtrack has been cleaned up, and the period hiss from the optical track was removed without affecting the voices, which are sure and strong.

There's no commentary, but there is a feature-length documentary on Capra that is narrated by Ron Howard. It's far better than the usual personality documentary, perhaps because its subject was far from ordinary. In addition to that documentary, you'll find almost complete footage (in color) of the American Film Institute tribute to Capra in 1982. There's also an interview with Frank Capra, Jr., from 1999, and critics Molly Haskell and Phillip Lopate discuss whether It Happened One Night can be classified as a "screwball comedy." There's also a killer essay in the printed foldout by critic Farran Smith Nehme.

These are all good, but the best extra of all is a new digital transfer of Capra's very first film, made at the Hal Roach Studios -- Fultah Fisher's Boarding House, based on Rudyard Kipling's celebrated poem. It's a 1921 silent short and has the usual exaggerated motions and facial expressions, but it also has tremendous energy and something special you just can't quite figure out. I think that mystery ingredient is Capra's genuine feeling for people.

I highly recommend this release of It Happened One Night to people who have seen it before as well as those who have not. Both groups can appreciate its riches. Oh, and prepare to laugh.

Be sure to watch for: The "Walls of Jericho" and hitchhiking scenes are well known, but I also like the scene of Gable undressing, which he turns into a comic striptease act. Gable is wonderful as a comedian, fielding rapid-fire quips with ease and spontaneity. What a shame he wasn't cast more often in comedies.