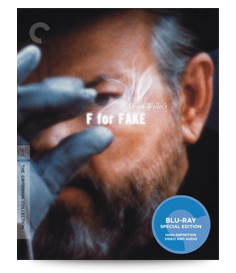 Orson Welles. Mention the name and images come to mind immediately: Welles who made Citizen Kane, a movie that many consider the best one ever made. Welles whose radio version of The War of the Worlds seemed so real that it started panic in the streets. Welles who was married to the incredibly beautiful Rita Hayworth. Welles who mesmerized audiences in The Third Man.

But when we think of the older Welles, we usually see an out-of-work actor/director with nothing to say who had turned to making wine commercials for a living ("We will sell no wine before its time"). This Criterion version of Welles's last completed film, F for Fake, goes a long way in dispelling those images, showing Welles as a man who still had a great passion for movies and who mugged for those commercials in order to raise money to pay for that passion.

F for Fake gives us 88 minutes of forgery and trickery. The first part involves Elmyr de Hory, one of the greatest art forgers in history, and Clifford Irving, whose faux biography of Howard Hughes got him on the cover of Time magazine bannered as "Con Man of the Year." And guess what. The cover photo was painted by no less than Elmyr de Hory! We find out in F for Fake that they lived on the same small Mediterranean island of Ibiza for a time. The second part of F for Fake involves Pablo Picasso and Oja Kodar (Welles's girlfriend/companion for the last 20-plus years of his life). In between we get scenes of Welles as a magician, which indeed he was. He played Las Vegas.

The film is fashioned in a scattershot manner as a documentary, yet it is not really a documentary at all, being all about deception! Welles incorporated period film, filling in with his own photography where necessary, as in the magic scenes. 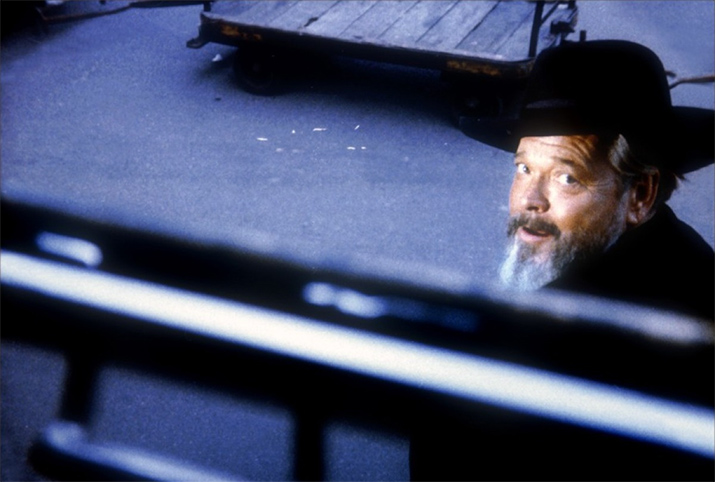 The extras are even more fascinating than the feature. There's a 1995 documentary from Kodar and Vassili Silovic called Orson Welles: The One-Man Band, which explores the works that Welles left unfinished at his death. This fascinating film also shows some snippets that Welles filmed here and there, including a hilarious one in which he plays more than a half-dozen characters including a cockney flower lady! Then there's an hour-long documentary about Elmyr de Hory, which is more factual than F for Fake yet just about as much fun. It's called Almost True: The Noble Art of Forgery. There's a 60 Minutes interview with Clifford Irving about the Hughes faux biography, followed by an audio presentation of Hughes's 1972 press conference in which he disavows any knowledge of Irving and his work.

It's difficult to give sound and image ratings for an undertaking like this. The video is clean and accurate, but many of the source clips are grainy and soft. However, the scenes shot specifically for the movie are definitely excellent and worth a four-star rating. The sound is mono and serves the material very well.

The entire F for Fake package changed my view of the older Orson Welles from tired old man to lovable eccentric full of life. You should see it.

Be sure to watch for: One the extras is Tom Snyder's in-depth Tomorrow interview with Welles from 1975, in which the two discuss Welles's radio days, The War of the Worlds, the effort to fund uncompleted films, and Hollywood. It's like an hour-long conversation with your favorite grandfather. You'll learn a lot about Welles, and it's loaded with surprises like the lowdown on The Shadow's laugh. Sorry, they don't talk about Rita Hayworth.