"Ace in the Hole" 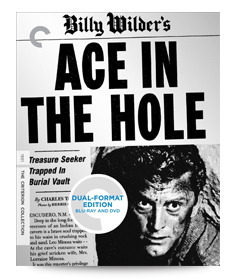 Anything for a Story

All except for Ace in the Hole. Re-titled The Big Carnival, it was very popular in Europe but not in the United States. Perhaps this is because it doesn't portray journalists in a very good light. Critics are very fond of criticizing others but have a low tolerance for being criticized themselves, so they gave Ace in the Hole short shrift. Over the years, however, the film has gained popularity by word of mouth among film fans, culminating in this handsome dual-format edition from Criterion.

Wilder's movies always featured colorful characterizations, but his characters weren't always loveable. In Ace in the Hole, he created two of the most unsympathetic characters in the history of cinema, newspaper reporter Chuck Tatum (Kirk Douglas) and bored, opportunist housewife Lorraine Minosa (Jan Sterling). At the beginning of the film Tatum arrives in Albuquerque, New Mexico, where he ends up writing for the Albuquerque Sun-Bulletin. In the film's first scenes we gather that he has been a writer in bigger cities but has been kicked out for his arrogance and alcoholism. A year later, still in Albuquerque, Tatum thirsts for any story that will put him back in the big time.

On the way to covering a story on rattlesnakes, Tatum and his young protégé, Herbie Cook (Bob Arthur), come across a tragedy in the making. Leo Minosa (Richard Benedict) has been trapped in the caverns of a Native American burial ground and will surely die if he isn't rescued. Tatum takes over, manipulating and turning the case into a nationally read story, convincing rescuers to practice a rescue procedure that will take much longer than a simpler, surer one. Readers flock to the area; even a carnival sets up tents. Tatum has successfully turned a simple rescue operation into a major event, going to any lengths just to get the story.

As far as Lorraine Minosa goes, she's happy with the turn of events, as the crowds flocking to her desert gasoline station pit stop will bring in more money. She could care less about her husband living. Even Tatum holds Lorraine in contempt, something Douglas successfully makes clear in his brilliant portrayal of Tatum.

Once again, Criterion has stepped up to the plate with a gorgeous transfer. The black-and-white picture has loads of detail and great contrast, and the soundtrack is as successful at transmitting the spooky sounds of near cave-ins and carnival music as it is in bringing Hugo Friedhofer's excellent soundtrack music to life.

Instead of the usual insert being a booklet, this release has a foldout as if it were a page of the Albuquerque Sun-Times, albeit on heavier paper than newsprint. In it, you can read two excellent essays: "Noir in Broad Daylight" by film critic Molly Haskell and "Chin Up for Mother" by Canadian filmmaker Guy Maddin.

The entertaining screen-specific commentary is from film scholar Neil Sinyard, and there are several documentaries containing interviews with Wilder, Douglas, and co-screenwriter Walter Newman. There's also a small still-frame collection and a good-looking trailer.

Did Charles Tatum commit murder in order to get a story? Watch Billy Wilder's damning film and see what you think.

Be sure to watch for: If you purchased or rented Universal's excellent Blu-ray of Wilder's Double Indemnity, watch the first color documentary on the Ace in the Hole set, where Wilder is on his feet pacing most of the time, and you can easily see how closely Edward G. Robinson patterned his fidgety Double Indemnity character on this director.