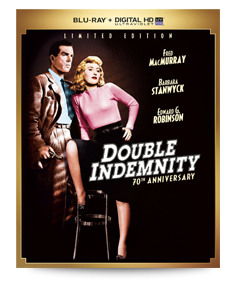 A Brilliant Edition of One of America's Greatest Films

Just about everyone concerned with this special edition of Double Indemnity credits it with being the first film noir -- the one everybody else imitated. It's a brilliant and entertaining movie that's perfectly paced; it never drags or lets up on the tension. A lot of this effect is due to the excellent screenplay by director Billy Wilder, partnering with pulp-fiction writer Raymond Chandler. Together they spiked-up James M. Cain's novella to make it a much more compelling narrative.

The plot is simple enough. Insurance salesman Walter Neff (Fred MacMurray) meets the wife of a client, Phyllis Dietrichson (Barbara Stanwyck), and falls instantly in lust with her. He goads, perhaps guides, her into admitting she would like to kill her husband (Tom Powers). The two plan a foolproof murder and execute it without a hitch, but Neff's boss, Barton Keyes (Edward G. Robinson), scrutinizes their actions. They still could have gotten away with it, but you know how love seasoned with guilt can turn to hate. To tell more would spoil the story for younger viewers who have not seen this classic.

Barbara Stanwyck was the first choice for Phyllis, and she gives a nuanced and riveting performance as a femme fatale who knows how to manipulate men without even trying. Everyone will note the blonde wig she wears, as it looks so cheap. But perhaps that was the point in defining the character. Until this movie, Fred MacMurray had played likeable leading men in romances and comedies, but casting him as a freewheeling salesman who gets sucked into a woman's web of deceit was just the right choice. Ironically, MacMurray went back to lighter roles after Double Indemnity, ending up as a key player in Disney comedies. 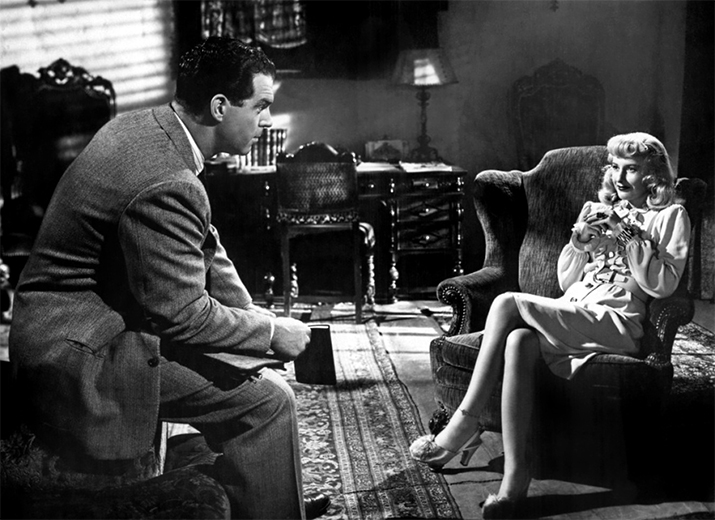 Edward G. Robinson is a delight to watch as he paces and gesticulates while spieling out rapid patter. He can never find his matches, so MacMurray strikes matches to light his cigars, a gesture that is reversed in the emotional last reel. Many surmise that the main love story in this movie is between the two men, though there's nothing homosexual about it; it's more a friendship of admiration.

Universal has produced the kind of special edition we have come to expect of Criterion. The film has been digitally restored so you'll see no dirt or splices, just a beautifully contrasted black-and-white image. This movie set the standard for shadow and light, especially the prison bar light created by light streaming through venetian blinds. The movie is very dark at times, but the transfer has good shadow detail, so it seems that nothing is in doubt unless the director intended it to be that way.

The soundtrack is particularly full and robust for a '40s film. The DTS soundtrack is listed as 5.1, but there's been no hokey attempt at directional sound; it just seems that the mono sound has been warmed up a bit. It was just right for me. Miklós Rózsa’s groundbreaking score sounds terrific, and all of the dialogue can be easily heard. The overall level was low, though, so I had to crank it up a bit higher than usual.

There are quite a few extras, including two commentaries: a screen-specific one by film historian Richard Schickel, and another more genre-focused one by film historian Nick Redman and screenwriter Lem Dobbs. Both are entertaining in their own way. There's a thoroughly pedestrian TV movie (in color) from 1973 with Richard Crenna, Samantha Eggar, and Lee J. Cobb, and it's so bad that it just points out the genius of the original. It is, however, in great shape with just two splices, sharp focus, and little to no noise.

To top things off, film historian Robert Osborne gives an introduction to the movie that reveals an alternate ending that was filmed but discarded. There is also a documentary on the making of the film called Shadows of Suspense and an interesting trailer. You'll also find in the box an envelope that contains reproductions of the original poster, three lobby cards, and a scene from the jettisoned ending.

Double Indemnity is one of the greatest American films ever made. It started the film noir ball rolling, and has been often imitated. The original is the best, however, and Universal has really given it a great birthday edition.

Be sure to watch for: Near the end of the film, MacMurray goes to see Stanwyck at her home. She has turned off all the lights and is sitting still on the right. Venetian blind-filtered light provides the only light. Very effectively, MacMurray's shadow enters on the left, followed by the actor himself, and then the shadow proceeds and guides him over to Stanwyck. The whole scene is as noir as it gets. A duped man, a rotten gal, lots of shadow and light . . . and danger.