"The Secret World of Arrietty" 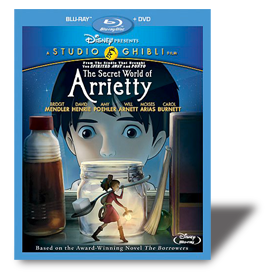 Studio Ghibli is to Japan as Disney is to America, so it seems entirely appropriate that Disney started releasing Ghibli animated films in the United States. Until now, most of the Japanese studio's films have been under the thumb of master animator Hayao Miyazaki. The Secret World of Arrietty marks the first time Ghibli has gone out of the gate with a largely different production crew. Hiromasa Yonebayashi directs well for his first feature-length assignment, no doubt tethered to the Ghibli tradition by Miyazaki's poetic screenplay.

Miyazaki and his partner Isao Takahata built a firm foundation for Studio Ghibli and added personnel who are devoted to the studio's style of animation and can execute it with thorough professionalism. The filmmakers do well enough with storytelling, but not on the masterful level of Pixar, or even Disney, for that matter. It is possible, then, that one might remember the look of a Ghibli film more than its characters or content. It's a look that beautifully shows off the HD video format when experienced through Blu-ray Disc.

The Secret World of Arrietty is very loosely based on The Borrowers by Mary Norton. Its focus is on little people who live beneath the floorboards of human houses. Their world looks very much like ours in many ways, and they are called "borrowers" because they borrow items from their unsuspecting human host family that will not be missed: a lump of sugar, spices, thread, needles -- almost any household item that they need. Arrietty (voiced by Mirai Shida in the native Japanese release and Bridgit Mendler in the English-language dub) is a young girl of the little people who lives in such a house with her mother and father. One day a human boy comes to stay in the house, and we learn that he has a heart condition and has been brought to the country to rest and gather energy for his operation. He sees Arrietty and, against convention (and a huge difference in size), the two become friends. Arrietty helps the boy gain emotional strength that will help him through his operation, while she and her family struggle to move to a new location (once seen by a human, the film tells us, the little people have to move on).

Disney has been reluctant to release Ghibli films in the US with their original Japanese soundtracks and subtitles, as we would expect a live-action film to be handled. The studio has instead opted to make English versions with well-known American stars. They have, however, provided the original soundtracks on their Ghibli DVD and Blu-ray Disc releases, as well as the English subtitles needed by most if they watch the movies with the Japanese soundtrack enabled (I am told that often these subtitles are translations of the English dub, not the original Japanese). I'm of a mind that the original Japanese is the way to go. Dearly as I love Carol Burnett and Amy Poehler, they just don't seem right as Japanese characters, and too much subtlety is lost in translation. Both the Japanese and English soundtracks are DTS-HD Master Audio 5.1, so you can choose without sacrificing the overall sound format.

The video is luscious, with all the rich color shadings intact as well as magnificent shadow detail and perfect contrast. Ghibli artists perfectly capture all the subtle shades in one color; their movies are perfect for checking your color saturation. Whether reproducing the dulcet rustling of grass or the boom of thunder, the soundtrack handles everything well, with a good nod to 360-degree atmospheric sounds throughout most of the film. The somewhat curious yet appealing Japanese-Gaelic music sounds just fine. The extras are slim. There's a feature with the original Japanese storyboards, and there are a couple of entirely lame music videos along with the original Japanese trailers.

If you haven't seen a Ghibli Studios film, check this one out. Then hunt for the studio's real masterpieces: Howl's Moving Castle, Porco Rosso, and Spirited Away. These aren't available on Blu-ray yet, but they're pretty sure bets for future releases.

Be sure to watch for: There's a visually delightful scene at almost any point in this visually stimulating movie, but I was particularly taken with one at the end of the film. As Arrietty, her parents, and her friend Spiller are floating down the river in a teapot, Arrietty looks down and sees a fish swimming in unison with them beneath the water. For me that was a moment of pure magic.