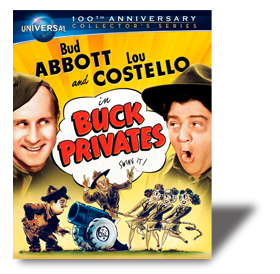 Universal Studios is celebrating its 100th anniversary this year by restoring many of its classics and releasing them in handsome Blu-ray book editions. So far we've had Out of Africa, To Kill a Mockingbird, The Big Lebowski, and All Quiet on the Western Front. Now we have Buck Privates, the first movie about the draft and the film that shot Bud Abbott and Lou Costello into superstardom. Though the movie is a comedy, and much of it slapstick, at its core it's emphatically patriotic, and audiences craved a big dose of patriotism after the bombing of Pearl Harbor.

Mostly a series of vignettes that happen after Abbott and Costello are drafted into the army, Buck Privates was a social phenomenon, but taken overall as a movie it's merely very good. That said, it contains some five-star moments. Some of these have to do with Abbott and Costello's word-play classics, such as "Dice Game" and "You're Forty, She's Ten." Some of the slapstick is classic as well, such as the scene where Costello is being drilled with other recruits and can't remember left from right. Some of the biggest moments come from the Andrews Sisters, the popular singing trio that became voices from home during the darkest hours of World War II. The scenes filmed here are among the trio's best, particularly their harmonies in "Boogie Woogie Bugle Boy" and "Apple Blossom Time."

Universal's restoration is most impressive. This Blu-ray ranks up there with Casablanca and Criterion's best black-and-white titles. The opening scenes predict what is to come. The movie opens on the street in front of an army recruiting center where there's a big crowd of men, mostly wearing suits (as was the fashion then). You see tweeds, plaids, stripes, and paisley patterns, not to mention the uniforms, both police and military. There's such high definition and perfect contrast that you can sense the texture of each piece of clothing. Throughout the movie you'll find that same excellent definition and contrast, though a few of the scenes in the army camp are a little blurred. The mono sound has been cleaned up so that the dialogue is easily heard without any hiss and the Andrews Sisters sound amazingly clean and clear. 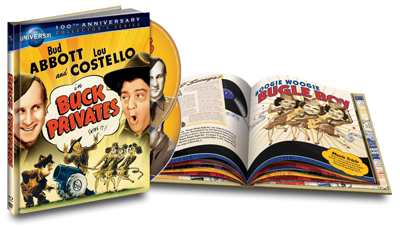 Not all of the extras are interesting. "100 Years of Universal: Unforgettable Characters" is a piece of promotional fluff, but "100 Years of Universal: Restoring the Classics" is worthwhile. We're told in general how the films are restored, and the extra contains the best explanation of grain that I've heard. There's also a pretty interesting, if not deep, extra on Carl Laemmle, the eccentric founder of Universal Studios. Last but not at all least, we find a curious little 1993 documentary (in color except for the film clips), Abbott and Costello Meet Jerry Seinfeld, which has a lot of scatter-shot snippets from Abbott and Costello classics, including their television show.

The Blu-ray book packaging is sturdy, attractive, and substantial, and its pages contain Abbott and Costello bios as well as those of the leading players. There’s also text of two of the famous routines -- "Dice Game" and "Drill." Many pages of the original press book are reproduced, as are a half-dozen or more original posters. You'll either view Buck Privates as dated or as a fascinating trip back to a different time, seen clearly in HD. Take the latter route and spend an enjoyable evening with two of the greatest comics of all time (OK, three if you include Seinfeld, who appears in the extras).

Be sure to watch for: During the opening scenes mentioned above, the camera discovers a large group of men being sold a bill of goods by huckster Abbott. Abbott is in the distance, with the men huddled around him toward the foreground. The Blu-ray definition is so good here that the scene has palpable three-dimensionality.