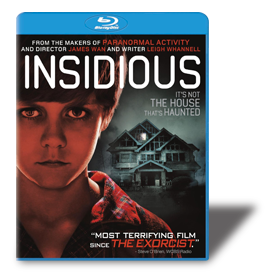 Scary "Insidious" Lives Up to Its Title

Haunted houses seem to bring out the best in genre directors. James Wan, who directed the first (and best) in the Saw series, seems super energized this time around. He's determined that you won't leave your home-theater room without being scared half to death.

The setup appears quite ordinary (for a horror film) for the first part of the movie. A photogenic, pleasant young couple, Josh and Renai Lambert (Patrick Wilson and Rose Byrne), move into a house without noticing, as we do, that it has haunted written all over it. True to the genre, things soon start levitating and strange visions manifest for Renai when she's home alone. After her son, Dalton (Ty Simpkins), goes into an unexplained coma, she begs Josh to get her out, so he buys a new house and they move. This dwelling is just as cheerful as the last was gloomy, but the strange happenings start again and seem more malevolent than before. It turns out that a demon hopped a ride with comatose Dalton when they moved, and the boy has, through astral projection, entered a realm far from reality.

The parents call in a medium (Lin Shaye), the inevitable séance takes place (though with several effective twists), and everyone dedicates their energy to getting Dalton back home. Yes, Insidious has bits of Poltergeist peppered in with a little of The Exorcist; but it treats all the familiar elements with either respect or new vision. There are plenty of scares to go around, but the difference in this film is that when we get to the buildup, complete with telltale music, there's a payoff -- something scary actually happens, unlike the tired scenarios in films that tempt characters to open cabinets only to find them empty. Insidious delivers shocks and scares by establishing that the Lamberts are nice, normal folks. We care what happens to them because it might happen to us! And Insidious, true to its title, revs up the horror slowly but surely.

You wouldn't expect the production values of a genre film like Insidious to be high, but they are. Daylight scenes are as good as they get, with superb definition, natural color, and excellent contrast. The night scenes, of which there are many, aren't quite as good, but they're certainly better than a lot of other low-budget horror movies. Perhaps most important, the sound is demonstration quality. A movie like this really depends on music and sound effects to help provide the scares, and the audio track for Insidious surely does its job. Weird little sounds come from all around the room, and every so often there's a loud subterranean thud that will test your subwoofer, not to mention your nerves.

The extras are three featurettes about the filming of Insidious. I'd usually pass these by, but all three offer extensive and interesting interview footage with Wan. If you're in the mood for some solid scares, Insidious delivers the goods. The Haunting (1963) is still the granddaddy of all haunted-house movies, but Insidious can be added to an enviable runner-up list that includes The Legend of Hell House, The Innocents, and Monster House (animated).

Be sure to watch for: The opening credits will give you chills. The movie starts with a long tracking shot in a dark place that lets your imagination run wild. The credits then appear in red against razor-sharp black-and-white photos. Each title has a faint shadow that appears and then vanishes in smoke. The clever attention to detail sets a proper mood for this seriously frightening film.