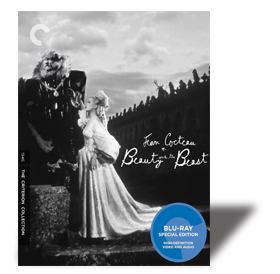 Classic Cocteau with an Unexpected Opera on Criterion Blu-ray

Among film connoisseurs, Jean Cocteau’s Beauty and the Beast is regarded as a masterpiece of fantasy film. Its timeless story is simple and direct, with great tenderness and slightly subdued passion. In the Cocteau-directed version, based on the story by Mme Leprince de Beaumont, Beast (Jean Marais) is a sympathetic character. His eyes seem to emerge from the amazing makeup to beg for help, and his gravelly voice betrays pain and longing. Belle (Josette Day) is a strong woman who resists her feelings for Beast until it's almost too late for him. The famous fantasy effects, from the outstretched bodiless arms holding candelabras to light the hall of Beast’s chateau to the living statues (which must have inspired parts of the Disney animated version), all seem to be extensions of reality rather than entities from a different world.

I've always been impressed with Criterion black-and-white transfers. Beauty and the Beast is one of their oldest catalog items; you can tell by the early catalog number of 6. I believe this version is the third time around, and the results are certainly fine. If they pale in comparison to Criterion’s The Third Man or The Seventh Seal, you can't really blame Criterion, especially after viewing the short featurette on restoration that's in the extras section. Cocteau made Beauty and the Beast in 1946, so there were simply no pristine prints available. The one that Criterion used for its Blu-ray comes from a 1995 restoration of the film. Almost all of the noise, video, and audio have been removed, but the contrast isn't as high as it might be and the focus occasionally shifts so that the picture, though never really soft, isn't always sharp. What we're left with is a final product that's very good but hardly cutting edge.

There are plentiful extras including two commentaries, one by film historian Arthur Knight and one by writer and cultural historian Sir Christopher Frayling. There's a 1995 featurette, "Screening at the Majestic," which contains interviews of the still-living cast and crew members. There's a section devoted to an interview with Henri Alekan, the film's cinematographer, and as usual the disc comes with a handsome booklet featuring interesting essays (one by Cocteau himself) and a complete listing of the cast and anyone who participated in the Blu-ray release.

The most intriguing extra for me was an opera by Philip Glass that was not only inspired by the film but also created to be synched with it. Criterion presents the opera as an extra soundtrack (with a DTS-HD Master Audio surround soundtrack). If you select it, Glass's opera replaces the original soundtrack. I assumed I'd hate this feature, but after experiencing it I've decided it's not bad at all. The singing and sound are both excellent, and for the most part the opera is perfectly synched to the images onscreen so you can use the same English subtitles as you would when viewing the movie with the original soundtrack. The notes by Philip Glass disclose that there have been many successful live performances where the movie is screened and the "soundtrack" is supplied by live musicians.

I'd probably sill watch the original if I wanted to see Beauty and the Beast, but it’s good to know that Criterion continues to produce challenging extras. The overall effect of this Blu-ray is close to excellent at times. If you've never seen it, treat yourself.

Be sure to watch for: Don't miss the still-frame section in the extras. All the shots are good, but the still of Beast against a black background and the three French posters at the end are breathtaking. I wish the movie itself always had the spot-on contrast of these stills.