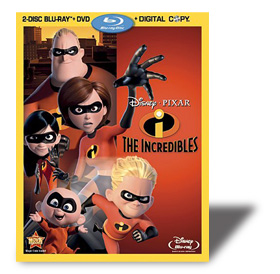 Pixar Animation Studios has racked up one hit after another, for a record that so far is unblemished. One of the factors that earns the studio accolades is impeccable storytelling. The writers, producers, and directors all have fertile imaginations, but they also have the uncanny knack of making the most fantastic plot and characters resonate with the average audience member, regardless of age or background. Brad Bird directed The Incredibles in 2004. It was his first feature for Pixar, but it wasn't his first film. That would be the highly regarded The Iron Giant, one of the few non-Pixar animated features worthy of mention in Pixar company.

In The Incredibles we're introduced to husband and wife superheroes who've perhaps done their jobs too well. Mr. Incredible (voiced by Craig T. Nelson) in particular has saved people from dying who didn't really want salvation. These malcontents sue, and society decides it doesn't need superheroes that have become such liabilities. Now he and his wife (the former superhero Elastigirl, voiced by Holly Hunter) have become typical suburbanites as Bob and Helen Parr, complete with three children: Violet (Sarah Vowell), Dash (Spencer Fox), and baby Jack-Jack (Eli Fucile and Maeve Andrews). Bob works in a government office, has gained too much weight, and is generally depressed by his sedate life, missing the excitement of his superhero days. Helen handles things a bit better, but the children are frustrated. They also have special powers (Violet can become invisible, and Dash can run faster than the speed of light), and they have a hard time keeping their abilities concealed.

Without telling Helen, Bob quits his job and starts hanging out with another has-been superhero, Lucius Best / Frozone (Samuel L. Jackson). The two friends listen to police calls and show up at fires, where they mask themselves and do what they did best in the past -- save people's lives. Bob, as Mr. Incredible, soon gets an offer he can't refuse: a caper to defeat a renegade robot that resides on a remote island. Off he goes, not realizing until later that the caper has been a ploy of an arch enemy, Syndrome (Jason Lee). Helen discovers Bob's deception and flies after him. Violet and Dash stow away on the jet, and soon the whole family is in peril on Syndrome's island.

Though the movie presents pulse-pounding chases and action sequences, it's also a deeper portrait of middle-age angst, the price of sedentary living, and the value of family. It has what all Pixar films have that make them so special -- heart. The Incredibles is also populated with exceptionally appealing characters, and it pits them against a villain we so love to hate. All of the film's ideas are presented in jaw-dropping, state-of-the-art animation and multichannel sound. Bird was almost 100 percent on target in guiding this huge project. My only problem is that at nearly two hours, the movie seems about 10 minutes too long.

I'm running out of superlatives for describing Pixar Blu-rays. Whether it's the brightly colored world of superheroes or the pale, washed-out picture of suburbia, the picture is simply perfect in all respects. The sound, ranging from quiet dialogue to earth-shattering chase effects, is equally outstanding. And for once, there's plenty of dynamic range, but not so much that if you turn your system up to hear the dialogue your home theater will be decimated by the blasts in action sequences. You can set the volume for The Incredibles and forget it, enjoying its terrific but unexaggerated dynamic range.

Disney seems to consistently release all of its major releases in multiple-disc sets so that anyone can play them on Blu-ray or DVD. This set has four discs. The two Blu-rays contain the feature and extras, the third disc is a DVD of the feature, and the fourth is a digital copy disc. The extras are extensive and contain many new HD featurettes as well as the entire set of SD featurettes from the previously released DVD. The best of these is a newly mastered HD of Boundin', the short that was originally shown in theaters with The Incredibles. The story of a tap-dancing sheep who finds his groove in spite of being shorn every year is one laugh-out-loud hysterical happening.

Be sure to watch for: As indicated, there are dazzling chase sequences scattered throughout the film. The best of these, "100 Mile Dash," occurs in chapter 23 when Dash runs through the jungle, pursued by whirring-disc-rotor pursuit ships. The foregrounds and backgrounds have equal focus during this high-speed chase, so much so that the picture has a near 3D sense of depth. The surround sound adds to the excitement to make this a memorable action-adventure sequence.