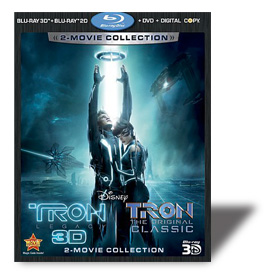 Style over Substance Triumphs in This Demo-Quality Set

In 1982 the original Tron seemed like nothing more than fanciful science fiction. Windows 1.0 was three years away, and no one's life revolved around laptops, cell phones, or iPads. Since home computers and gaming were only future visions, videogame arcades were at their peak. Tron drew on the immense popularity of those games, coupling them with science-fiction fantasy to ask a novel question: what if a human could be defragged and reconstructed as a game piece on a computer grid?

In the original film, Kevin Flynn (Jeff Bridges), creator of several top games, has his programs stolen by ENCOM, a corrupt and powerful corporation under the direction of Ed Dillinger (David Warner). Flynn and Tron (Bruce Boxleitner), a trustworthy program, must then fight the evil Master Computer (David Warner's voice) to clean up the grid and (back in reality) kick Dillinger out of power.

The 2010 sequel takes place several years later, with ENCOM under Flynn's direction. But he suddenly disappears from sight, leaving his young son, Sam, to be reared by grandparents. Flash-forward to the present, and Sam (Garrett Hedlund) has grown to be an impetuous 20-year-old genius just like his dad. But he shows little interest in ENCOM, which has again fallen into unfriendly hands. Summoned to his father's old arcade by a mysterious message, Sam is defragged onto the computer grid, where he finds his father held captive by the unfriendly, egocentric program Clu (also played by Bridges, with digital facial reconstruction to make him look like his young self). Flynn, Sam, and the program Quorra (Olivia Wilde) must make it to the portal between reality and the grid. Once back in the real world, Sam knows he can easily defeat Clu.

Neither of the films was a great success on dramatic terms, but both succeeded in a true triumph of style over substance by displaying stunning visual effects of a light-filled computer landscape and city, and by incorporating thrilling, derring-do chases on light cycles and other futuristic transports. In 1982 the original Tron was trendsetting. Though CGI is commonplace now, it was new back then. Tron showed what the technology could do, paving the way for everything CGI that followed. Tron: Legacy, using the same basic design for the grid, ups the quality of CGI effects to a breathtaking new high. The city, the light cycles, and the costumes all display more intricate, glittering neon than ever.

Both video transfers are excellent. If I were to separate the composite rating above, Tron would receive four stars, and Tron: Legacy would get a highly coveted five. Both movies present bright neon colors (particularly in the piping of the costumes) against inky-black fields and infinitely varied grayscale backgrounds, and each shows near-perfect contrast. Both movies, Tron: Legacy in particular, unfold such detailed images that it's like watching a great fireworks show. You can ooh and ah at every new wonder, each better than the last. The original movie reminds me just how far we've come in home theater. Twenty some years ago I sold laserdiscs for a while, and Tron was one of our demo discs, specifically the scene in which Kevin Flynn is defragged and sucked into the grid. Looking at the incredible graphic resolution of that scene now, it seems impossible that we could ever have regarded those laserdiscs so highly. This Blu-ray trounces anything that's come before. It also explains why I never warmed up to the laserdiscs or videocassettes, or even the earlier DVD. These movies are all about image, and unless the image elicits wonder by being perfectly crisp and clean, why bother?

Tron's sound is quite good and has been beefed up so that the Wendy Carlos score has both heft and clarity. The mix for Tron: Legacy is one of the best available on Blu-ray. It's been touched up and remixed from the original theatrical effort, and it offers totally immersive, 360-degree sound from beginning to end. But that's not to say the sound is confusing; it's totally clear, with important dialogue up front and ambient and directional screen-specific sound in the rear. The 360-degree soundfield is used to clarify rather than muddy the sound.

The set has five discs. The first is the 3D theatrical version of Tron: Legacy, which I didn't watch, as I'm not set up for 3D yet (but I have every reason to believe it would be at least as good as the 2D, which is sensational); the second disc is Tron: Legacy in 2D, which is so sharp and clean that at times it almost seems like 3D; the third disc presents Tron: The Original Classic on Blu-ray; the fourth offers Tron: Legacy on DVD; and the fifth disc is a digital-file copy of Tron: Legacy.

There are hours of extras about both films that will keep you thoroughly entertained. If you have an HD screen 50" or more, this set is a mandatory addition to your collection. Along with Avatar, The Ten Commandments, and any Pixar film, it will give you the most out of your display. Both movies are available separately in two-disc Blu-ray collections as well as on DVD. The five-disc set is available in a deluxe version that comes housed in a replica of an identity disc. You may think you've seen enough of these films, but trust me: you've never seen or heard their wonders like this!

Be sure to watch for: Almost any scene in Tron: Legacy is of demonstration quality, but the sound is just as amazing. Consider the scene near the beginning of the movie when Sam enters his Dad's boarded-up arcade and flips a coin into the jukebox. The rock music pounds away and changes perspective three or four times as Sam discovers the arcade's secret inner sanctum. You're not likely to find this level of audio-perspective detail in many films, but it's commonplace in this immaculately mixed soundtrack.