"Once Upon a Time in America" 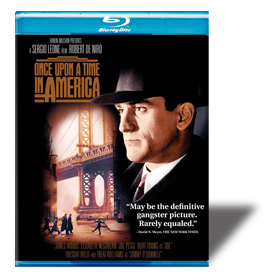 Once Upon a Time in America turned out to be the last film by Italian director Sergio Leone, the man who put Clint Eastwood on the map with his spaghetti westerns. It's often described as a gangster movie, but I think of it more as a coming-of-age film and a movie about a friendship that also happens to be about gangsters. In this case not the usual Italian mob, but a Jewish one. But more importantly, the film's main character has an opium dream. This assumption makes more palatable the film's almost operatic scope, unhurried pacing, and its third act filled with implausible, unanswerable questions.

That main character is David "Noodles" Aaronson (Robert De Niro), who has, through his partnership with his boyhood friend Max (James Woods), climbed to the top by selling illegal liquor during the days of Prohibition. Through the use of flashback and an occasional suspension of time, Noodles observes three different periods in American history. The 1920s are the best, when the pals are boys and their crimes are more or less amplified and expanded pranks. These sections of the sprawling movie have appealing intimacy and a sense of humor often missing in scenes taking place later in Noodles' life. The first half ends, for instance, with a violent rape scene that is anything but funny. I'd forgotten just how ugly it is; it's the kind of scene that makes you want to crank up the speed, get it over with, and get on with things.

That scene was shorter in the original American version, which was cut by an hour and a half, making for a disjointed movie that often made little sense. This Blu-ray is the complete 229-minute cut that was shown in Europe and everywhere else. It was released on DVD some years ago, and I have a feeling that this Blu-ray is just an HD update of that DVD.

The picture is at times close to five stars, especially during the 1920s scenes, where every piece of clothing, lock of hair, and piece of wooden furniture is so sharp that it has a distinct texture. But in the middle-period and present-day (1968) scenes, a softness creeps in and renders a picture that is merely very good. The DTS-HD Master Audio 5.1 tracks are used simply to expand a soundtrack that's basically monaural. The music has an appealing richness to it and the dialogue is easy to hear, but there's little in the way of 360-degree-soundfield directionality.

There are only three extras: a trailer, a brief documentary on Leone shot during the making of the movie, and a very entertaining and thorough commentary by film historian Richard Schickel. Once Upon a Time in America is a rhapsodic, passionate, and epic film, and its brilliant, enigmatic performance by Robert De Niro is certainly a better representation of his abilities than his recent Focker films. For about half its length it looks absolutely stunning, and the rest is never less than very good. It would provide a fine evening's escape on these cold winter nights that keep us close to home and hearth.

Be sure to watch for: Chapter 29 opens with an astonishing nighttime street shot in the 1930s. The details of the buildings and shadows combine for a scene that has amazing depth and presence. You feel like you can go right into the scene, and that's exactly what the camera does.