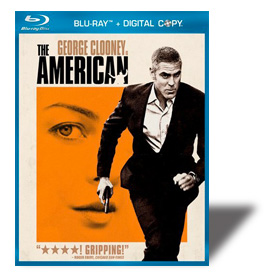 The American opened to a tepid box office and general public neglect, yet I feel it was one of the best films of 2010. Perhaps it was the trailers that propped the title up as an action-adventure movie, while word of mouth belied that opinion with claims that it was "artsy." Potential audience members were understandably perplexed, and they avoided the film. The American played for only a week or two in my local multiplex to smallish audiences of mostly older women who were clearly fans of its star, George Clooney.

That reception is a shame, as The American is a most worthwhile movie. Yes, it has a European feel to it, and Clooney really is the American interloper in an otherwise European cast. But what's wrong with that? It only serves to set up his character as an outsider. The American tells the story of Jack (Clooney), a hit man who begins to rethink his life after being forced to shoot his girlfriend to eliminate witnesses to his latest kill. Jack's current assignment is to construct a super rifle, an assassin's special, for Mathilde (Thekla Reuten), a voluptuous but cold assassin. Colder yet is Jack's boss, Pavel (Johan Leysen), who becomes an increasingly ominous figure as the film plays out. Jack wants out of the game, but will Pavel let him go?

The film is taut and suspenseful, as well constructed as the weapon Jack is assembling. Clooney is perfect in his role, and he fully and subtly conveys the extreme paranoia and loneliness that are part of a hit man's work. But as much as I admire the portrait of Jack by Dutch director Anton Corbijn, I didn't like the ending of the movie. Perhaps it was inevitable, but Clooney convinced me that Jack deserved another go at a different kind of life, and I wanted to see him receive that reward.

Martin Ruhe's splendid photography of the Italian countryside, stark yet not drained of color, is a main feature of this movie and has traveled well to the Blu-ray. Colors are full and true without turning into Kodak moments, and the detail is impressive. My only complaint is that the subtitles haven't been redone for home viewing and are a bit small. Since there are never any huge washes of sound, the audio tracks don't command as much immediate attention as the picture, but when examined in retrospect they stand out as refined and singularly clean. The music often uses the surround channels in subtle ways, and some of the action sequences place sound effects there as well, but 85 percent of the film's soundtrack is up front, perfectly balanced and clear.

The extras, which are a little skimpy, include a director's commentary track, a few deleted scenes, and a brief production featurette. The splendid film is the thing here, and I'd recommend that you at least rent it, though I'd consider purchasing it, as it plays so well on repeated viewings. The American deserves much more interest and respect than it received theatrically, and hopefully brisk sales and rentals of the Blu-ray Disc (and DVD) will correct that oversight.

Be sure to watch for: At the end of the first chapter, Jack is looking over a body of icy water from a ferry as he leaves Sweden. He walks toward the camera as we see bright-red and white railings in the foreground, along with red and blue signals. Across the white-blue water we see land, dotted with steely, blue-green evergreen trees and rust-red farm buildings. Though there are warm colors in the shot, the overall feeling is cold, typical of the movie’s design.