"The Disappearance of Alice Creed" 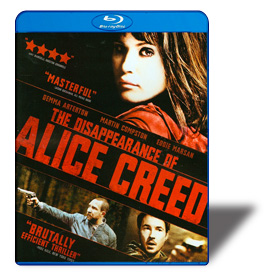 You might expect me to wrap up the year with a review of some last-minute blockbuster, like Salt. To tell the truth, that movie was scheduled, but the review copy never arrived. So I picked up a title that was on hand and discovered a marvelous sleeper. This is how it usually happens: sleepers are discovered, not planned. They are those little movies no one has heard of because they failed to receive the kind of promotion afforded an A-list movie. Sometimes you can find one in the local mall eightplex. Say you are planning to see a big blockbuster and get to the theater a little late to find out that the film is sold out. Not wanting to waste the trip, you look to see what else might be interesting and pick an unknown film, go in to see it, and emerge having discovered a little masterpiece. Or it can be that DVD you pick up when all the copies of something like Salt are already rented.

Though I saw Salt in the theater and think it is a darned-good action-adventure film, I am sort of happy the Blu-ray didn’t show up, because The Disappearance of Alice Creed turned out to be a terrific little sleeper, a first-time feature film by director J Blakeson, that turned out to be a mesmerizing crime thriller. I can’t tell you much more than the setup or I will spoil your fun. Two men (Eddie Marsan, Martin Compston) set up an abduction, donning ski masks to brutally kidnap a young woman, Alice Creed (Gemma Arterton), who is heiress to a large fortune. They tie her up to a bed in an undisclosed, soundproofed location and begin to negotiate a ransom. All seems to be going well until there’s one little slip up and from that turn the plot careens through intricate twists and turns to an unexpected ending. Double crosses become the rule of the game, always surprising the audience and keeping it from being too comfortable.

In a three-character movie such as this, the actors must all be first-rate on their own and play well with each other. That is certainly the case here. If one character ends up being a bit stronger than the other two, it is because that’s written in the script, not because anyone has less talent. The three young actors here are absolutely outstanding, making even the implausible sections of the plot acceptable. Blakeson also wrote the taut script and that, superb acting, and his astute direction make this little movie absorbing from beginning to end, all without a big budget.

The Blu-ray Disc displays stark colors, though this is partly because the film was shot in locations that are intrinsically drab. When there are bright colors they really pop but since the colors are so highly contrasted, the overall picture seems somewhat cold. There are no artifacts, shadow detail is good, and blacks are solid. The atmospheric music score by Marc Canham is splendidly reproduced, as are the voices up front. There’s not much surround, but just enough to keep the front soundstage from sounding flat. Extras include an interesting director’s commentary, deleted scenes, a storyboard featurette, and a gag reel.

This movie probably didn’t play at your local theater complex, but that’s no reason to keep you from seeking out the Blu-ray (or DVD). The Disappearance of Alice Creed is a superbly crafted, well-acted little thriller that delivers. It’s worth a rental for sure.

Be sure to watch for: The opening scenes are clever, showing the two men shopping for the items they will need for their kidnapping. The shots are angled so that they involve the audience as coconspirators while showing off a lot of minute detail.