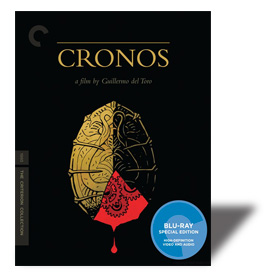 Mexican director Guillermo del Toro will be known to most readers from Pan’s Labyrinth and his two Hellboy movies. Cronos was his first feature film and in it one can catch glimpses of the fantastic visions that would permeate his later movies. Though largely ignored in America, this cinematic gem received generous accolades in Mexico.

Cronos is a unique vampire tale, a very new take on an old genre. It combines elements of horror with a fairytale-like telling, developing characters we can care about. The main one is Jesús Gris (Federico Luppi), a dapper and kindly elderly man who is the proprietor of an antique store. At the film’s beginning, we see him in the company of his wife (Margarita Isabel) and his shy granddaughter Aurora (Tamara Shanath), who speaks only one line in the whole film yet makes her warm presence and love for her grandfather known by gestures and facial expressions. Some find her irritating, I find her essential.

One day at work, Jesús finds a strange object hidden in the base of a newly delivered angelic statue. It is a small, golden device not unlike an insect’s body, with a real bug inside. When activated it projects pinchers like insect legs that puncture one’s body, exchanging blood. The result is that Jesús becomes younger and gains eternal life, but at the expense of becoming a vampire. He is approached by an American businessman, Angel de la Guardia (Ron Perlman), who wants to obtain the machine for his ailing 86-year-old uncle, De la Guardia (Claudio Brook), who’d rather be a vampire than dead. Angel pursues Jesús relentlessly until there is an inevitable stand-off.

That’s the cut-and-dried of it, but there’s a lot more in the subtext, which lets us share the misery of Jesús, who really didn’t want to become a vampire and always seems a bit befuddled and depressed by the results. The movie was filmed with rich colors, though red is reserved for blood and life and is often seen against blue surroundings, where it stands out. The movie has a look that draws the viewer in; even when eerie events are distasteful it is hard to keep from watching them. The Criterion transfer was supervised by del Toro and is both sumptuous and appealing. The audio track is a cleaned-up version of the original stereo and is rich and full as far as the almost overbearing music is concerned and excellent at capturing dialogue. The latter is in both Spanish and English with easy-to-read English subtitles for the former. For the Prologue, which tells the background story of the alchemist’s device, one is given a choice of languages.

Disc extras include commentaries by del Toro and producers Arthur H. Gorson and Bertha Navarro, as well as the director’s early (and bizarre) six-minute short, Geometria. The best extra, though, is the collection of script notes reproduced in the disc’s accompanying 42-page booklet where del Toro describes each character, including their biographical back stories.

Be sure to watch for: In chapter 11, Jesús is at a party and follows a guest having a visible nosebleed into the men’s room. A big spot of blood ends up on the tile floor and Jesús passionately licks it up. The color contrast and content make for an unforgettable scene.