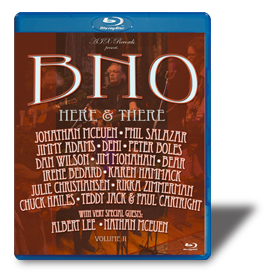 AIX Records has always done well by Nashville's country and bluegrass music. One of the company's first (and best) releases was Nitty Gritty Surround (AIX DVD-Audio 80008) with John McEuen and Jimmy Ibbotson. AIX and the McEuens have kept in touch. As Mark Waldrep, chief CEO and engineer at AIX, puts it, "Like the previous release, Jonathan McEuen (John McEuen's son) and Phil Salazar gathered up some of their very talented friends, brought them to LA, and recorded a very diverse collection of songs." BNO stands for Brand New Opry.

The disc lists 14 artists and two guests, but they aren't all in front of the camera at the same time. The first cut (and my personal favorite) is "Big Ol' Red Guitar," and it uses eight performers, headed by phenomenal lead singer and composer Jimmy Adams, who sadly died before this Blu-ray was released (they recorded the album in 2005). Adams has a powerful voice and sings forcefully without affectation. He's heard one time later singing another of his tunes, "At Least He Died in Nashville." To me these two cuts are worth the price of the disc.

But you get a lot more. Since Jonathan McEuen picks the performers, you'll find him playing or singing on just about every cut, and he does both exceptionally well. On "Can't Live Without You," he harmonizes with his brother Nathan, who takes the lead and who also wrote the tune. It's a lovely, gentle cut -- just the two singers with their guitars and bass player Chuck Hailes.

A lot of the disc features traditional fare that you'd expect on a bluegrass album, songs like the traditional "Hop High," along with "Full Moon" and "The Old Man's Song," both written and sung by Peter Boles. But there are departures from the traditional sound as well. The most significant of these is "Warrior of Love," which opens with Native American singing and drums from Bear, then segues into the song written by Deni along with Irene Bedard. The latter is Native American, and she provided the voice for Pocahontas in Walt Disney's animated film.

Once again, AIX has provided 24-bit/96kHz Dolby TrueHD tracks with a choice between stage and audience mixes, as well as a PCM stereo track at 24-bit/96kHz. This time I really have no favorite; they are all excellent, yet quite different. The stage mix sends some musicians to the back channels, whereas the audience mix does not. Each mix captures the musicians with superb realism and presence. My only quibble is that Irene Bedard is mixed a little too low in her number. I get that she's the gentle "warrior of love" contrasted with Deni's declamatory "Blood Is on Fire," but I found myself straining to hear her. There are special BD-Rom files for two-channel FLAC and stereo MP3, as well as a new headphone "surround mix" at 24-bit/48kHz. AIX claims this does not sound like it's inside your head, but that it recreates the sound of the AIX surround mixing room. I'll have to take their word. You have to have a BD-Rom drive in your computer to get the files, and I did not.

The extras are a little skimpy by AIX standards. Included are a bonus video ("Lowlands"), some still photos, and onscreen biographies of the musicians. The booklet includes all of the song texts and tells you who is playing what on each track. As usual, Waldrep has filmed the singers in very well planned and executed HD, without any applause so you can listen to the disc without video and still enjoy it immensely. Score another 21st-century HD triumph for AIX Records.

Be sure to listen to: The solo riffs on the opening cut. Though the focus is on Jimmy Adams, guest artist Albert Lee is on hand for a sizzling guitar spot, and Paul Cartwright and Phil Salazar prove that when handled by masters, two fiddles can be better than just one.