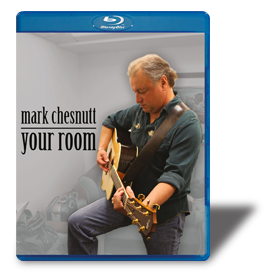 When sound engineer / CEO Mark Waldrep makes a recording for his AIX Records company, it's without many video trappings. There's usually a carpet in the center, perhaps a vase of something, and in this case two strings of lights. The musicians are grouped in a semicircular fashion around the carpet. It's strictly barebones staging without any crowd. The sound recording follows suit, with no audio-mix distractions, sweetening, or knob twiddling. This is what the singer and musicians really sound like; it's like walking a tightrope without a net. Mercury did this with Living Presence -- set the microphones, set the levels, and let the musicians do the rest.

I say all of that because I think not everyone will really "get" this fine recording the first time through. It's country music, and we all expect that to sound a certain way. The "in your face" twangy sound has been drilled into our heads from radio, television, and live concerts. So when you first watch and listen to Your Room, you might feel like it's lacking something. About three quarters of the way through, you realize that what's missing is all the audio garbage we've become accustomed to.

So, given this naked approach, how do Mark Chesnutt and his seven-piece band measure up? Just fine, thank you. I've always liked Chesnutt's songs, but having only heard him in nasal-sounding mixes on the radio, I felt his voice was more flash than substance. This AIX recording proved a revelation. Chesnutt has a fine, mellow (if not powerful) voice with a slightly nasal top end -- it's not even close to what you hear on the air. And to add to that resume, he's sensitive and subtle. Just watch and listen to the way he handles the microphone and injects ever-so-subtle expression into ballads such as "Almost Goodbye," about a couple that fights but can't really break up, or "Thank God for Believers," which portrays an alcoholic arriving home in the morning to find his wife waiting up for him.

Of course, Chesnutt is known for his upbeat songs as much as the sad ones, and according to the AIX biography he has garnered 14 no.1 hits, 23 top-ten singles, four platinum albums, and five gold records! You'll find a lot of those winning songs on this disc -- "Bubba Shot the Jukebox," "It's a Little Too Late," "Old Flames Have New Names," "Blame It on Texas," and my own personal favorite, "Goin' Through the Big D."

As usual with AIX, the listener gets to choose the sound mix. There's a stage and audience mix in Dolby TrueHD 5.1 and a PCM stereo mix. I felt the latter best balanced the vocals with the instruments, but all were above average. The video is very sharp and clean with good color and contrast, and the camera plotting is about the best AIX has done. I never felt the camera was in the wrong place, and the balance of close-ups and long shots seemed ideal.

There are a few good extras, such as a short clip of a performance from Billy Bob's Texas in Fort Worth, and there's a bio of Chesnutt, but sadly missing are bios of the thoroughly first-rate players in the band, though a credit roll displays the names of the fine songwriters. If you don't like country music because of the way it's usually recorded, give AIX's truth and honesty a try. And by the way, since it's a studio performance with no applause, you can turn off the picture and just listen to the program like an audio disc. An HD audio disc to boot.

Be sure to listen to: In "Too Cold to Go Home," various members of the band embellish and counter the melody Chesnutt sings so poignantly. It's an example of perfect interplay between singer and band, an intimacy with a recording to match.