Can Headphone Measurements Get Better?

Since I began measuring the performance of headphones six years ago, it’s been quite a journey. Not a journey through a picturesque mountain landscape dotted with rustic inns, but more like one through searing deserts and freezing snowscapes packed with predators and empty of civilized comforts. The prevailing standard for headphone measurements, IEC 60268-7, was originally published in 1984 by the International Electrotechnical Commission, “a non-profit, non-governmental international standards organization that prepares and publishes International Standards for all electrical, electronic and related technologies,” per Wikipedia. It’s an in-depth and well-considered standard, but most of it is now more than an entire human generation old -- in technological terms, perhaps ten generations. Some of its recommendations have been called into question by more recent research, and some reflect limitations and conditions that time has erased. 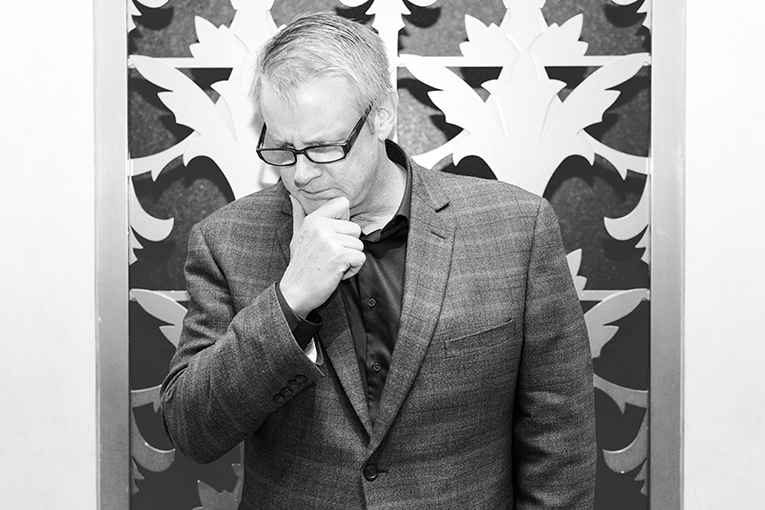 What we’re left with are headphone-measurement practices that are largely the results of informal collaboration among manufacturers, test-equipment companies, and the tiny group of reviewers who have invested in headphone-measuring gear. Even those few people who’ve measured and listened to a large number of headphones are usually reluctant to predict how a given headphone model will sound based on its frequency-response measurements. In fact, I’d go so far as to say that a measurer’s confidence in his or her conclusions about headphone sound based on measurements of those headphones is often in inverse proportion to that measurer’s experience in taking those measurements.

We also know little about what headphone measurements mean for frequencies above 10kHz. This is partly because most equipment used for measuring headphones was intended primarily for measuring hearing aids, where the goal is voice intelligibility rather than natural audio fidelity. But it’s primarily because the shape of the human ear canal varies so much from person to person, and because, the higher the frequency, the more those changes in shape affect the soundwaves that reach the eardrum. This doesn’t matter to the brain, which adapts to the characteristics of your ear canals. But there’s so much variation in the shapes and responses of ear canals that creating a meaningful model of the response of the “average” human ear canal at frequencies above 10kHz may be impossible. 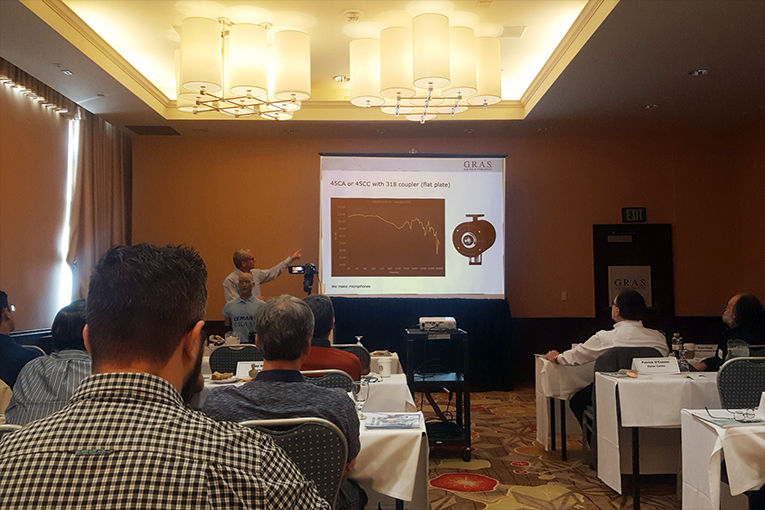 However, we’re starting to see potential for improvement in this situation. I recently attended the Los Angeles presentation of “Headphone and Headset Measurements: The Challenges of Testing Today’s Devices,” a daylong seminar conducted by: G.R.A.S. Sound & Vibration A/S, the Danish makers of the headphone test equipment I use; Listen, Inc., which provides software and hardware for electronics testing and analysis; and measurement consultant Chris Struck, of CJS Labs. The seminar examined some new techniques and equipment that may improve and expand future headphone measurements.

Most significant was the introduction of the new KB5000 Right Anthropometric Pinna -- a simulated outer ear for use with ear/cheek simulators and head/torso simulators. What’s the big deal about a fake rubber ear? The advantage is that the KB5000 is a lot more realistic than the fake rubber ears we now use, which are based on a decades-old design. It’s much softer and more pliable, which means that headphones -- especially on-ear models -- will fit more naturally onto it, and frequency-response measurements will thus, I hope, be more representative of what a human actually experiences. The KB5000 also has an anatomically correct ear canal -- the old model had only a round hole. This means that, instead of using a cylindrical steel coupler to take measurements of earphones, we can now use something that’s acoustically and physically much closer to a real ear. After getting a chance to try the KB5000, I plan to upgrade my measurement system with a KB5000 right ear -- and KB5001 left ear -- as soon as possible. 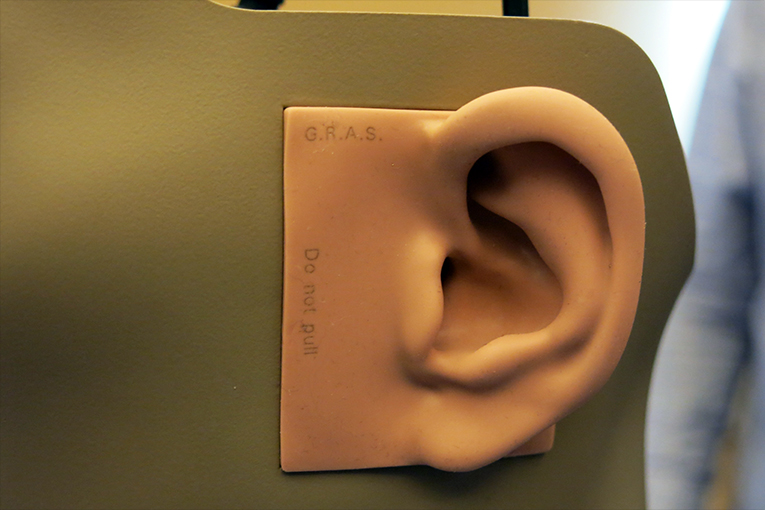 G.R.A.S. also showed their new 43BB-1 low-noise coupler, which makes it possible to take accurate noise measurements of active -- i.e., noise-canceling and Bluetooth -- headphones and earphones. It had never occurred to me to measure the noise produced by these products’ internal circuitry, but anyone who’s used active headphones and earphones knows that noise and hiss are common problems with them. 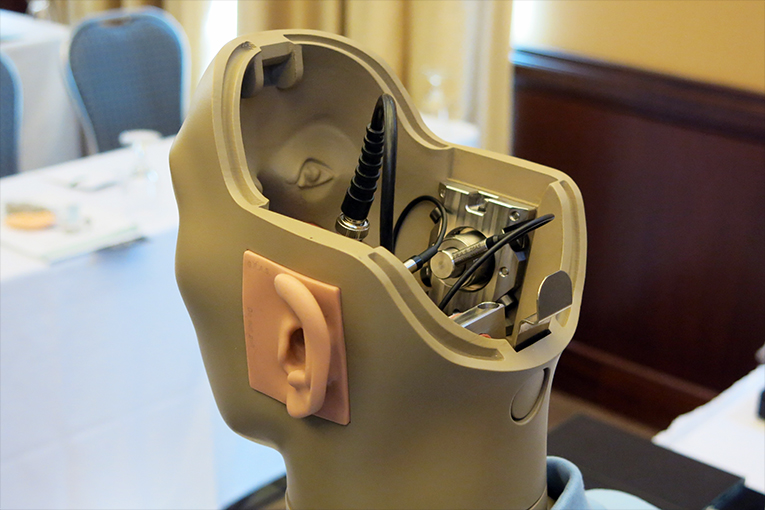 Listen, Inc. founder Steve Temme examined the possibility of measuring headphone performance above 10kHz, pointing out that these measurements are important because of the increasing use of digital sampling rates above 44.1kHz, which facilitate frequency response beyond 20kHz. According to Temme, while frequencies above 20kHz aren’t audible, headphones that can’t reproduce them may produce intermodulation distortion when fed ultrasonic content, which would result in audible artifacts. (His statement is supported by a paper presented at the 2001 Convention of the Audio Engineering Society: “Detection Threshold for Tones Above 22kHz,” by Ashihara Kaoru and Kiryu Shogo, of Japan’s National Institute of Advanced Industrial Science and Technology.) Many headphones today are touted as being capable of reproducing high-resolution signals, and in my view, reviewers should test those claims.

Temme’s method involves the use of a standard measurement microphone mounted in a steel plate so it can be interfaced with headphones. While this measurement clearly does not attempt to simulate the acoustics of the human ear, it at least makes possible a relative comparison of the abilities of different headphones to reproduce frequencies beyond the audioband. It seems to me that a simple tube-type coupler could allow these measurements to be extended to earphones as well. I’ve begun experimenting with these techniques in the hope that I can eventually incorporate them into my measurements for SoundStage! Xperience.

Not only do these developments hold the potential to make headphone measurements better, they will finally give me the chance to do something a few of my less-enthusiastic readers have long suggested: Get a new set of ears.