The Future of Headphone Listening

For years, I’ve labored under a skewed perception of the headphone listening experience, thanks to two unique experiences, one of which took place two decades ago. But two experiences in the last couple of weeks have completely changed my beliefs. 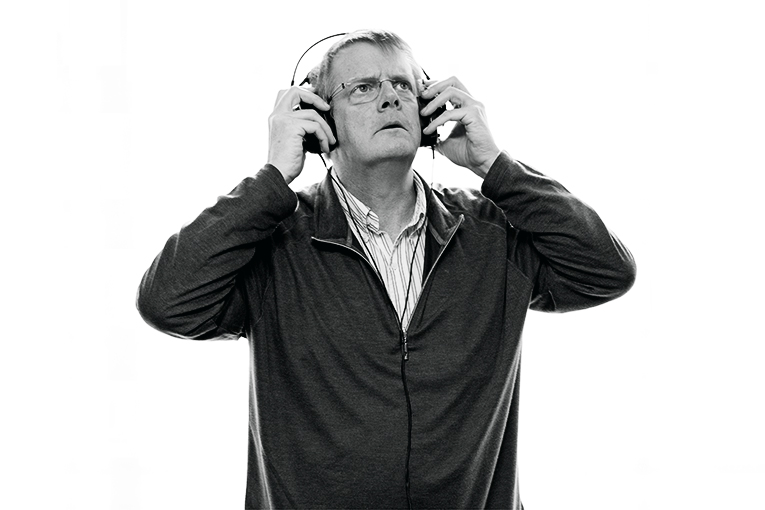 My ideas about headphone listening were heavily influenced by a 1996 visit to Virtual Listening Systems, a Florida company that had built a headphone sound processor that was eventually marketed as the Sennheiser Lucas. During that visit, VLS measured my head-related transfer function (HRTF) -- the acoustical effects of my body and ears on the sounds I hear, and which my brain uses to locate those sounds. They placed microphones in my ears and sat me in an anechoic chamber, where a speaker attached to a robotic arm emitted test tones from positions all around and above me. They then loaded my HRTF into a computer, and played me a concert recording (of James Taylor, I think) that the computer had processed for my hearing. It sounded amazingly real. The “sound in the middle of your head” effect that has long been the chief drawback of headphone sound was gone, replaced with the sound of a small concert hall -- and with no unnatural sonic artifacts. The processor worked with a tracker on the headphones so that the music seemed to come from the same location at all times, no matter where I turned my head. This tracker was critical in achieving the realism I heard -- we use tiny, almost imperceptible movements of our heads to help us locate sounds.

I soon began to think I’d never again experience such great headphone sound. When the Sennheiser Lucas processor at last went into production, it included 16 different HRTF presets; some sounded nice, but none gave me the uncanny sound I’d heard in the VLS lab. And my next experience with headphone processing -- as a marketing director for Dolby Labs, which at the time was promoting its Dolby Headphone technology -- made me no more optimistic. Dolby Headphone and its competitors sounded nice enough, but for me, at least, nothing like a real speaker system or a live performance. The closest I could get was listening to binaural recordings, such as the ones made by Chesky Records, but there are only a few of those.

But it gets better

A couple of weeks ago, I finally had an experience that not only equaled but bettered what I heard in 1996 at VLS. It was my long-overdue audition of the Smyth Research Realiser A8 ($2910 USD), a headphone surround-processing system that’s been available for a few years now. The Realiser A8 processor has eight-channel analog and HDMI inputs and outputs. It includes a set of tiny, foam-shrouded microphones that fit in your ears, much like a set of earphones with Comply foam eartips. A sensor sits on a stand or shelf in front of you; it follows the movement of a tracker mounted atop your headphones. Headphones are not included -- you can use your own -- but Smyth also sells the Realiser A8 bundled with a pair of Stax SRS-2170 electrostatic headphones.

To calibrate the Realiser A8, you connect the processor to a surround-sound system (or a stereo system, if you prefer), place one mike in each ear, then run test tones through the different speakers. Then you run measurements with your head turned to the left and right. Then you put on your headphones and run two more sets of measurements, so the system can compensate for their characteristics, too.

The entire process takes about 20 minutes and is well worth the effort. As soon as it was done, Smyth VP Lorr Kramer began playing some music through the speakers -- in this case, a world-class, all-JBL home-theater array of Everest DD67000 front left and right speakers, K2 S9900 surrounds, and a 880 Array center, all optimized for the room using digital signal processors. Or at least, I thought I was hearing sound from the speakers. We were using Stax SRS-2170 headphones, which are open-backed, and the directional cues I was hearing were so accurate that I assumed the sound from the speakers was leaking through the Staxes’ backs. But when I pulled off the headphones, I was shocked to hear that all the sound had been coming from them. The speakers were muted.

I listened to many different musical selections and a couple of movie clips, going back and forth between headphones and speakers, and in every case, it was hard to tell the difference between the sound of the speaker system and the sound of the headphones. Even when I turned my head, the sound still appeared to be coming from the speakers -- including the sound effects from the surround speakers. The only difference I could identify was that the headphones’ treble sounded ever-so-slightly softer. It was by far the most realistic, captivating headphone listening experience I’ve had.

The Smyth system has its limitations. It’s not portable, and the user must be present for the calibration -- which means you have to calibrate it to mimic the sound of a speaker system that you have access to. And, of course, the cost and the calibration process will scare off non-enthusiasts. According to Kramer, much of the market is in the film sound-production industry, where the Realiser A8’s cost is well worth its ability to duplicate the acoustics of an expensive dubbing stage.

Although calibration results are specific to each user, Kramer told me that a group of users on the headphone site head-fi.org are exchanging calibration files so that they can experience different acoustical environments through the Realiser A8. However, he said, “Our goal is to have performance that’s interchangeable with the real thing, and you cannot get that from someone else’s head. That said, what you hear from someone else’s measurements may be quite enjoyable.”

There’s a chance that the Realiser A8’s technology might someday trickle down to more affordable products. “We would like to be able to bring this technology to a broader audience,” Kramer said. “We’d probably do it through licensing rather than becoming a mass-market manufacturer.”

My faith in the potential of headphone processing restored, I began to notice a Facebook ad I’d been mentally blocking. (Because I constantly visit the websites of headphone manufacturers to research articles, Facebook loves to show me headphone ads, most of which I ignore.) The ads were for Ossic, a company that had just completed a Kickstarter campaign to fund a new surround-sound headphone design. Coincidentally, a friend of mine who works on surround-sound mixes had begun bugging me with questions about Ossic. Noting that Ossic is based in San Diego, within a reasonable drive of my Los Angeles home, I contacted them to see if I could get a demo.

Ossic was founded in 2014 by a group of former Logitech engineers. According to cofounder and CEO Jason Riggs, the company’s headphones will begin shipping in limited quantities in November at a retail price of $399, with full availability in early 2017.

“The Smyth Realiser was an inspiration for me,” Riggs said. “My goal was to get that kind of performance in a headphone that didn’t require a complicated calibration process. The moonshot is, the user gets realistic surround sound without having to do anything.”

The Ossic headphones currently exist only in prototype form. Inside each earpiece are four drivers, so that sound from the drivers strikes the ears much as it would from a set of speakers in a room. “We just let your ears do their job,” Riggs said. The headphones do have a built-in sensor that detects the size of your head, and adjusts the sound to compensate for it. The only thing the end user will have to calibrate is the built-in head tracker; you’ll push a button to tell the headphones which direction is straight ahead. The headphones will offer a USB-C connection for surround sound, and a conventional 3.5mm connection for stereo use. It will simulate sounds from overhead as well as in the horizontal plane, so it will be compatible with immersive audio technologies such as Dolby Atmos and DTS X. 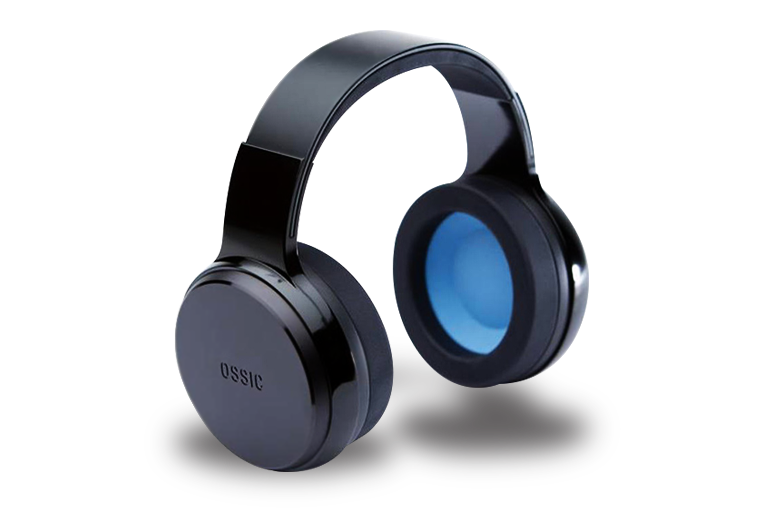 In the demo I heard, with a prototype connected through a large multiconductor cable to a box containing the processor and amplifier, the Ossic headphones produced a convincing surround-sound effect. I didn’t get as solid a center image as I’d heard from the Realiser (creating a convincing center image is the toughest task in surround-sound processing for headphones), but I also heard none of the phasey, unnatural artifacts that make most of the headphone virtualizer algorithms I’ve heard unpleasant to listen to. The center image improved if I turned my head just a bit, though, and, overall, I enjoyed the experience. I’ve heard many multiple-driver headphones, but this was the first I’d heard that I thought produced a reasonable simulacrum of the sound of a 5.1-channel system, and only the second that delivered a natural tonal balance without a lot of sonic colorations.

Of course, this was from a prototype that looked only about two notches more refined than headphones I’ve built myself. And the model that Ossic used for an acoustic environment was none other than the company’s workplace, a triangular space with a large table where the staff works surrounded by all manner of computers and cabinets; it reminded me more of the TV series Silicon Valley than a listening room. “The final product will have at least a few room models, and we may offer more as an upgrade,” Riggs said.

Impressed as I was with the Ossic headphones’ performance with movies and music, I was completely bowled over when I heard them in a virtual reality system. One of the Ossic crew hooked me up with an HTC Vive VR headset and the Ossic headphones, running a VR program from a computer. I found that the headphones produced accurate audio cues -- that is, when I heard a sound coming from behind and slightly above my left shoulder, the source of the sound (in this case a troll-like wizard) was right there. I’ve seen VR many times, but never with the sound effects so accurately placed. According to Riggs, Ossic’s object-based technology -- similar to what’s used in Dolby Atmos and DTS X -- allows it to produce sound from as many as 572 discrete locations. I don’t have any idea what the killer app will be for VR, or if it will become a major part of our lives, but the overall effect produced by the Vive-Ossic rig was one of the most compelling electronic media experiences I’ve ever had. 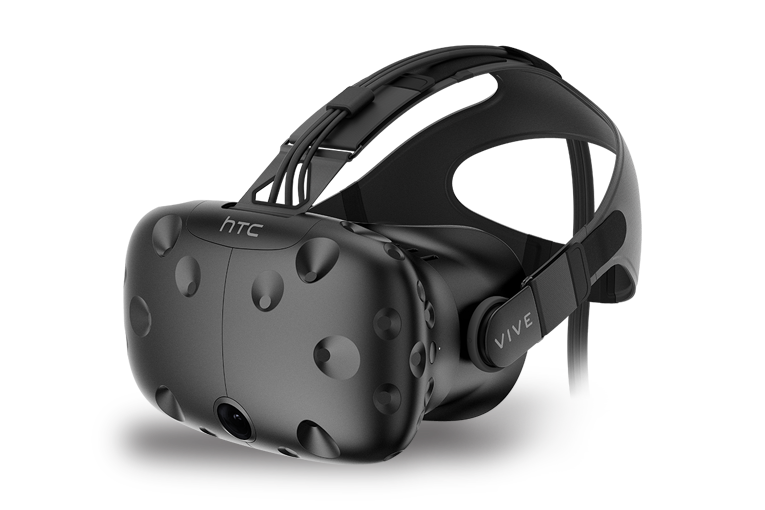 I asked Riggs if he intends to create a full line of Ossic headphones, or to license the company’s technology to larger manufacturers. “TBD,” he replied. “The goal is to give people a headphone that breaks them out of fake-sounding surround. We’ll see where we go with it after we get the first product out.”

My experience with Smyth Research’s Realiser A8 and Ossic’s prototype convinced me that the possibilities I heard two decades ago at the Virtual Listening Systems lab can become reality. How long it will take to hear convincingly natural-sounding surround from a set of headphones I can slip into a laptop bag and use on an airplane, I don’t know, but at least there’s hope.