Cheap Stuff Can Be Surprisingly Good

Just over a year ago, when I moved into a brand-new house, my first priority after settling in was to set up a basement home theater so I could start reviewing home-theater equipment as soon as possible. It took about a month to get the gear in the big rig up and running, and several more months to have all the room's trim work completed. A year later, I'm about 95% finished. Only my equipment rack is yet to be done.

During a year that exhausted my finances and my time, I neglected my living-room system. Still, I'd had the builder rough-in the living room for a 5.1-channel system. A 50" plasma TV has been on the mantle over the fireplace for over a year, with no accompanying speakers or sound system. The left, center, and right locations have wall plates covering the speaker wires, and two holes in the ceiling show me where the ceiling surround speakers should go. Over a year of staring daily at these reminders of my unfinished work has been depressing -- not to mention having to endure the TV's tinny sound.

In the past few months, I finally decided to do something about the holes in my living-room walls. I would use the system casually, during the day -- no critical listening -- and it wouldn't have to play really loud. I'd already thought of using on-wall speakers, and so had bought the set of Angstrom Suonos I reviewed a while back. Now I needed an A/V receiver and a Blu-ray player. I also found a bargain-basement plasma TV that I could use in my bedroom.

The missing link in my living-room system was an A/V receiver. After poring online through specifications and any other information I could find, I came across Yamaha's RX-V667 receiver, packaged with Harman/Kardon speakers, for a total price of $699 USD at Amazon.com. A friend had use for the speakers, so we split the system: my portion came to $295, about half the RX-V667's list price.

The RX-V667 has a graphic user interface (GUI) that's second to none in its class, and a good deal better than the GUIs of many far more expensive receivers. It has two subwoofer outputs and can drive seven speakers, although I needed only five channels for my system. There are five 3D-ready HDMI inputs on the rear panel and one on the front -- again, plenty for this system. One cool feature is the ability to switch HDMI signals when the receiver is off. This lets me watch TV without turning on the whole system, which is great for late-night watching. Other highlights are the ability to biamp the left and right front speakers by assigning the rear surround channels to the front, and preamp outs for adding a seven-channel power amp. I can't take advantage of the biamp option with the speakers I'm using right now, and I doubt I'd add an amp to this system, but it's nice to have these features.

After setting up the speakers and receiver, my first reaction was one of disappointment and embarrassment. The Angstrom Suono speakers didn't sound anything like what I hear in my main home theater. They sounded muffled, with few high frequencies to speak of. In fact, they sounded so bad that I checked to make sure the tweeters weren't damaged -- they weren't.

It wasn't until I'd run the Yamaha Parametric Room Acoustic Optimizer (YPAO), which is included in the RX-V667, that the system began to sound good. The high frequencies returned, and the speakers sounded much more focused than in that first listening session. The power output seemed adequate, with enough oomph to drive the Angstrom Suonos to high but not overwhelming volumes.

Now to buy a Blu-ray Disc player. BDPs keep coming down in price, and now can be had for under $100; I settled on LG Electronics' BD570C ($150). What drew me to this model was its network connectivity via both wireless-N and Ethernet. I'm starting to save a lot of my audio/video files on a NAS device; the BD570C would allow me to keep all my media files in one location and access them in the living room.

The connection to my local area network (LAN) was effortless with both Wi-Fi and Ethernet, and the BD570C found a firmware update soon after connection. Nearly all media files, from JPEGs to videos, played back flawlessly, although, disappointingly, the BD570C wouldn't play FLAC audio files. The LG is certified Digital Living Network Alliance (DLNA), meaning that it could find media files on any of my network-connected computers. Not only that, I could attach a hard drive to the LG and read media files off that. As if that weren't enough, the BD570C will also connect to YouTube, Netflix, and the Picasa photo-sharing site. All of this makes it a true multimedia hub for a living room.

With the LG's ability to play a huge variety of media files, its playback of Blu-ray seems almost an afterthought. Although lacking a name-brand scaler like my Oppo BDP-83, the BD570C held its own. I can finally suffer through Pixar's Cars Toon: Mater's Tall Tales for the thousandth time with my five-year-old twins in full 1080p from Blu-ray rather than from an upscaled DVD. 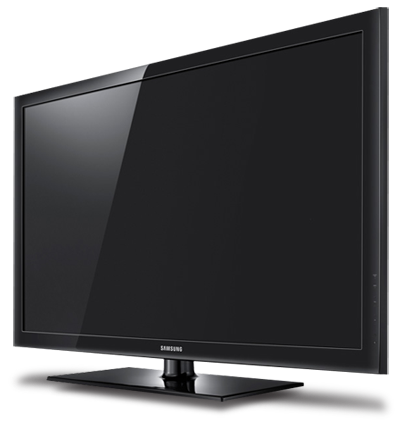 The final bargain-basement component I picked up was a plasma TV. Up here in Canada, on the day after Christmas, we have a tradition called the Boxing Day Sale in which, as in Black Friday sales in the US, most retailers offer huge discounts. Purveyors of electronics are no exception, and perusing their sales flyers, I came across Samsung's PN42C430, a 42" plasma display, for $375. Having experienced both LCD and plasma, I thought it would be ideal for my bedroom -- the screen reflections common among cheap plasma sets wouldn't be a problem with a TV that would be used mostly in the evening.

So at 7:30 the morning of December 26, as my family slept on, I left my cozy bed and made my way to the electronics store. It was a bit of a gamble, as the model I wanted might already be gone -- many people camp out in front of stores the night before. But I hate standing in line in the cold, so I took my chances. Sure enough, after waiting in line only 20 minutes, I managed to snag one of these bargains. Although the line at the checkout counter was nightmarishly long, the morning I'd spent getting the Samsung seemed worth it.

I hung the PN42C430 on the wall and was pleasantly surprised at its performance. Although its top resolution is only 720p, that's also the highest resolution available through my satellite box -- I wasn't losing anything. Given my viewing distance of 10' or so, 720p is more than adequate. Black levels were also better than those of my older 40" 1080p LCD TV, which cost three times the Samsung's price when I bought it a couple years ago. Watching sports was much better than on the LCD TV; the plasma's refresh rate is faster than the LCD's 120Hz.

In these past few months I've found some pretty cheap electronics that performed surprisingly well in my living room and bedroom. Sure, the Yamaha RX-V667 doesn't have the sonic power to blow away my family when watching the alien invasion scene in Chicken Little, but that's OK -- its sound is still a hundred times better than anything the TV's speakers can produce. I also see a nice upgrade path: The Samsung TV has only two HDMI inputs, and the bedroom lacks a 5.1 system. In a year's time, I can move the Yamaha AVR up to the bedroom to make room for a new system in the living room.

In short, you don't have to hold out until you can afford to hit a grand slam for your home theater. These days, cheap electronics can work really well, and allow you to get in the home-theater game sooner than you might think.