All About the 6th-Generation Apple iPod Nano 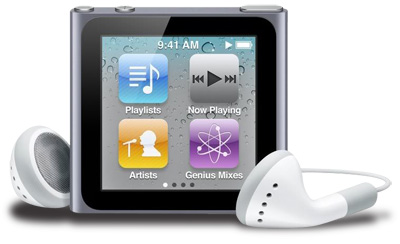 What’s in a name? A lot, if you judge by Apple’s new iPod Nano. Until now, the Nanos have been rectangular affairs, and just a year ago, the 5th generation added video capabilities, including a camera, and the ability to play music videos. That version also had the familiar click wheel. The new, 6th generation has ditched all the video stuff but added the Multi-Touch screen and 30-pin connector from Apple’s iTouch and iPhone. And Apple has borrowed from the iPod Shuffle a rear-panel clip and a new, smaller size. In short, the sixth Nano is more like an iTouch or a Shuffle than a Nano. So why did Apple call it a Nano? You’ll have to ask them.

Apple can always be depended on for appealing packaging, and this time is no exception: The iPod Nano comes in a neat little plastic box. Remove the seal strip and the Nano and you find a pair of Apple’s justly maligned earbuds, a USB charging cable, a quick-start instruction manual, and an Apple logo sticker. What you’re supposed to do with that last item is beyond me. Maybe you stick it to your car window to identify yourself to other Apple users. I’m not that indiscriminately social.

The first thing you’ll notice about the Nano is its size: just 1.61"W x 1.48"H x 0.035" thick, including clip. It weighs just 0.74 ounce. The screen takes up the entire front, and the clip almost all of the back. The only controls are on the top edge: two buttons for volume up/down, one for on/off. On the bottom edge are a headphone jack and the iTouch 30-pin connector, for charging the Nano’s battery and connecting the Nano to your computer and Apple iTunes. Despite its small size, the Nano feels solidly built; I had no fear of damaging it in normal use. It comes in seven different metallic colors.

The Nano is touted as being Multi-Touch -- you can use two fingers to rotate its 240x240-pixel screen 360 degrees in 90-degree increments. Changing the menu displayed is done by swiping a finger across the screen, to reveal, in turn, four different menus, all but the last having four icons each: Playlists, Now Playing, Albums, Songs; Genres, Composers, Artists, Genius Mixes; Podcasts, Clock, Radio, Photos; and Fitness. You can touch and hold any icon until it wiggles, then move it wherever you want. This feature, familiar from the iTouch, lets you group the functions you use most often on the same screen.

The icons look like app icons, but what you see with the Nano is what you get; it’s unable to import apps. The Settings menu includes several subdivisions, accessed by tapping and swiping -- familiar actions to those who have an iTouch or iPhone. Under About are lists of the numbers of songs, photos, etc. currently stored on your Nano, its serial number, and other pertinent facts. Music Settings lets you choose among more than 20 equalization settings: Bass Booster, Classical, Jazz, Small Speakers, etc. It’s nice to have some way of adjusting the sound; I settled on Small Speakers, which equalized responses nicely for my headphones. Here you can also set a maximum volume limit, turn audio Crossfade on or off, and set the Nano to shuffle or not shuffle tracks when you give it a shake.

In the General settings you can select (but not import) wallpaper, brightness, day and time, radio regions, live pause (see below), and language. You can also set voice-over, and change the display from black on white to white on black. The Photos section has submenus for setting up a slide show.

The icons pertaining to music are self-explanatory. To search by Genre, tap that icon to show a list of the types of music stored on your Nano; tap a genre to see a list of all of those titles; tap on any track to listen to it. The Composers, Songs, Artists, and Albums icons take you through a similar process for those categories. When you select a song, its album’s cover is crisply displayed. You can tap the cover to get two overlays: one has chapter skip and pause; the other has Genius mix, Shuffle, and a Time Remaining bar.

The Photos icon takes you to your photo albums, and Clock displays a full-screen analog clock face. Swipe that image to the left to display stopwatch and timer screens. The Fitness icon opens a pedometer; turn it on to find out how many steps you take in a given time period, and how many calories you’ve burned. The History tab lets you compare different pedometer sessions.

The Radio icon works only if you have wired headphones plugged into the socket; the Nano uses the headphone wires as antennas. (It won’t work with wireless Bluetooth headsets.) The radio function’s Live Pause feature lets you pause a broadcast and resume it later (there’s a 15-minute buffer limit).

I’d been looking forward to using the Nano at the gym, so most of my tests were performed there. I think Apple missed the boat by omitting Bluetooth. Yes, it worked fine with wired headphones, but the real joy of using it comes with wireless headphones, which permit unparalleled freedom during a workout. To do this with the Nano, I used a very small Sony TMR-BT8iP transmitter dongle (it plugs firmly into that 30-pin connector), and alternated using Sony DR-BT21G and jWIN wireless headsets. The Nano drove easily and worked flawlessly with both headsets.

Previously I’d been able to listen to one of my playlists, "Gym Shuffle," only at MP3 rates, since my 2nd generation iPod Shuffle doesn’t accept files of higher resolution. The new Nano let me transfer "Gym Shuffle" to it as an Apple Lossless file, and what a difference that made. The sound was now free and transparent, with good bass and treble (thanks to that Small Speakers setting, I think). To work out, I mostly listen to up-tempo tunes from the Backstreet Boys, or to This Is a Shakedown, an energetic heavy-rock band from Cleveland. Through the Nano, these tracks had tight bass and focused drums to keep me going. With my old Shuffle I’d had to skip forward until I found the track I wanted; with the Nano I could just swipe the screen, get the playlist or album contents, and tap the desired title.

During a good workout I lose all track of time -- when I wanted to know the time, I tapped the Clock icon. I put the pedometer to use and found it very accurate. But most important, the new Nano is so small and light that I could just slip it in the pocket of my gym shorts and forget it. The only reminder that it was there at all was the rich, full music coming through the headphones.

Many accessories have been made for the new Nano, but only a few are good. One natural thought is to wear it wristwatch style, and many manufacturers have entered that market. I tried a few wristbands that hold on to the Nano only by its clip, but I don’t recommend them -- there’s too much chance it could detach. Another wristband has been announced that’s claimed to encase and protect a Nano, but I haven’t seen it yet. I did try an armband from Belkin that held the Nano securely. I did find a great case for storing a Nano when it’s not in use; go to www.countycomm.com/lightercase.htm and check out the Maratac Lighter Cases: padded cigarette-lighter covers in which a Nano fits perfectly. (To see their wristbands, click on Maratac Watch Bands, then Search for Nano.) But when all was said and done, I preferred to just slip the Nano in my pocket or clip it to the waistband of my gym shorts.

Using the Nano’s 30-pin connector, I was able to connect it to my car stereo system (through the connection usually occupied by my iTouch) for my drives to and from the gym. Since all the music had been transferred to the Nano as Apple Lossless files (and a few in 24-bit/48kHz AIFF), the Nano’s sound was indistinguishable from that of the iTouch. I had the 16GB version of the Nano, and so was able to stuff it with lots of music representing almost all genres. Sir Georg Solti and the Vienna Philharmonic’s performance of Beethoven’s Symphony No.5 -- a close-up recording in which every attack of bow on strings can be almost felt, and the solid, burnished brass sound can be reveled in -- sounded splendid. Joan Baez’s Diamonds and Rust opens with twangy instruments that set off her velvety voice; the Nano tracks sounded just like the CD, maybe even a little better.

Back home, with wired headphones plugged into the Nano, I tried its FM section and was mightily impressed. Radio and TV reception are generally subpar in the hilly, wooded area in which I live, but the Nano was able to tune in ten local stations, six of which sounded excellent -- more than any other tuner has been able to achieve in my home.

However, I never got anywhere near 24 hours of music on a single battery charge. With a wired headset playing music continuously, the best I could do was 12 hours. Using the wireless Bluetooth setup at the gym was even worse: Sony’s dongle gets its power from the iPod into which it’s plugged, and four hours was the best the Nano could manage -- enough for two workouts, but far short of Apple’s claim.

Though uninterested in the Nano’s photo capabilities, I tried the slideshow settings and found that its 240x240 screen provided fairly astonishing resolution for something so small -- the same impressive sharpness that it had displayed with album covers.

Considering its high cost and its divergence from the expected Nano specifications and features, the iPod Nano 6th generation isn’t for everyone. If you’re at a desk and/or home most of time and want to load up with lots of apps as well as video capability, spending another $75 or so for an iTouch would make the best sense. If, however, you jog or work out at a gym and can add Bluetooth to the new Nano, it should be just right for you. Its small size makes it easy to use with gym clothing, and the use of wireless Bluetooth phones greatly enhances a good workout, especially as the quality of the unit makes possible portable sound that is surely high fidelity. It’s unfortunate that the little Nano is called a Nano, because it doesn’t extend the Nano tradition. Though it draws from features found in other Apple products, it’s really something quite new -- so why not call it something like the iPod Sport? There really can be a lot in a name, if it carries on a tradition. I wouldn’t be at all surprised if the next version of the Nano had Bluetooth capability and was sold as a "watch" that could store and wirelessly play music.