Two months ago I gave very high marks to Tribit’s MaxSound Plus speaker. The young company then sent me a review sample of their StormBox, which conclusively proves that the MaxSound Plus was no fluke. Tribit makes quality compact Bluetooth speakers that sound good and cost a lot less than the competition -- in this case, $65.99 USD.

In the StormBox’s compact box is the speaker itself, a small but informative and illustrated user guide, a USB-to-Micro-USB charging cord, a welcome card, and an opportunity to contribute $1 to UNICEF by reviewing the speaker. 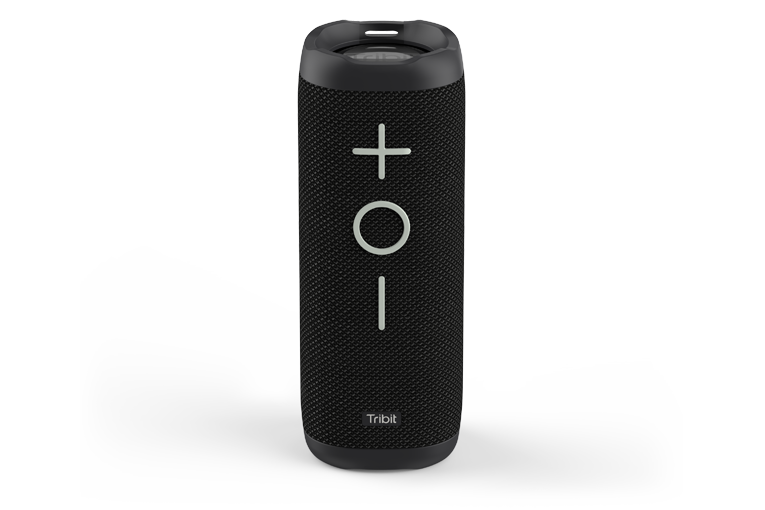 At 7.09”H x 2.68”W x 2.68”D, the StormBox is about the size of the MaxSound Plus, though designed to be set on end rather than laid flat. It weighs 19.2 ounces and is basically a longish rectangular box, its edges so rounded off as to make it almost cylindrical. There’s a 1.77” passive radiator at each end, the top one adorned with the Tribit logo. The speaker has two 1.77” drivers, each powered by a 12W amplifier.

A fine mesh grille wraps around about 90% of the StormBox’s longitudinal surfaces, except for a rubber strip on the back that contains the power switch, four white LEDs to indicate battery strength, a button for pairing multiple StormBoxes, an XBass button, and a waterproof port with a tethered hatch that protects the Micro-USB jack and auxiliary 3.5mm jack that enable the use of non-Bluetooth devices. On the front are cartoonishly oversize buttons for volume up and down, and between them an equally big multipurpose button that lets you play or pause (one press), skip to the next track (two presses), or back to the previous track (three presses). This button also lets you receive or reject phone calls -- the StormBox can act as a speaker phone. The StormBox comes in black or bright blue.

Attached to the top of the speaker is a durable strap. The StormBox is claimed to be waterproof, with a rating of IPX7, and uses Bluetooth v.4.2. Other specifications include a frequency range of 70Hz-20kHz, a playing time on a full battery charge of up to 20 hours (depending on volume), and a charging time of four hours. The StormBox is warranted for 18 months.

Two StormBoxes can be paired for dual-speaker use without using an online app: Power both units on while pressing the Bluetooth button on one of them, until you hear a tone. The other unit will then pair automatically.

The StormBox was fun and easy to use. I carried it around comfortably in one hand, or dangled it from its heavy-duty strap. It’s designed to stand on end in use, and I found that best, but the rubber-like strip on the back can also serve as a long pedestal to keep the StormBox reasonably steady when laid flat. Tribit claims a maximum range of Bluetooth operation of 66’. In my home, it covered the whole house up to 40’ -- very good, as these things go.

The StormBox easily paired itself with my Benjie Rocker music player the first time I used them together, and from then on the two paired automatically every time I turned them on. The StormBox’s buttons all worked fine. I had a little trouble seeing the buttons on the rear strip, but those aren’t used very often. And as you can see in the photos, no one could miss the controls that will be used most often -- those three huge buttons on the front. 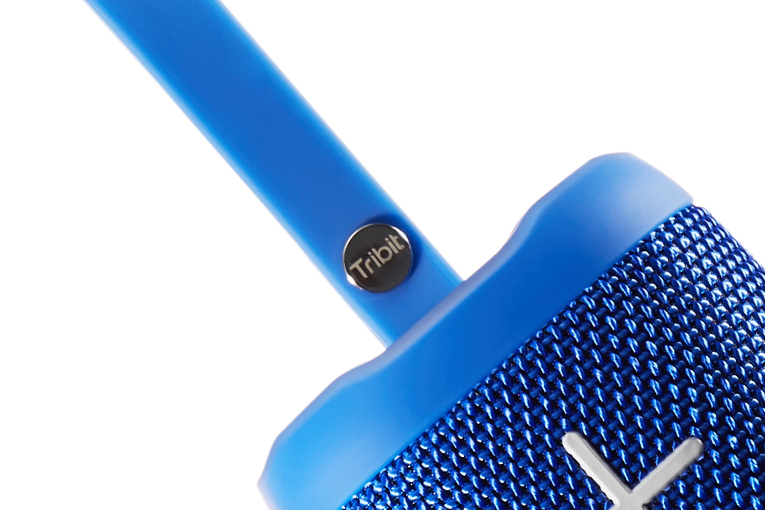 I liked that the StormBox prompts the user not with a prerecorded voice but with snatches of music -- light burbling sounds. The hatch for the port bay fit firmly and snugly, to ensure that the speaker would remain waterproof. I took it with me into the shower twice, and submerged it in the kitchen sink. No ill effects.

The StormBox sounded quite a bit like Tribit’s MaxSound Plus: reasonable accuracy in the mids and highs, and the midbass thumped along with good definition and a solid impression. The StormBox played fairly loud without distortion, but its sound got a tiny bit harsh when I pumped the volume up to max. Backing the volume off two clicks took care of that without altering my perception of the volume level all that much. Tribit’s advertising trumpets that the speaker has 360° sound, and indeed its sound was very even tonally from all directions.

Curiously, Tribit’s XBass technology didn’t change the sound all that much. With the MaxSound Plus, the difference is significant; with the StormBox, it was so subtle I found it hard to tell the difference. But, XBass on or off, there was always plenty of midbass. 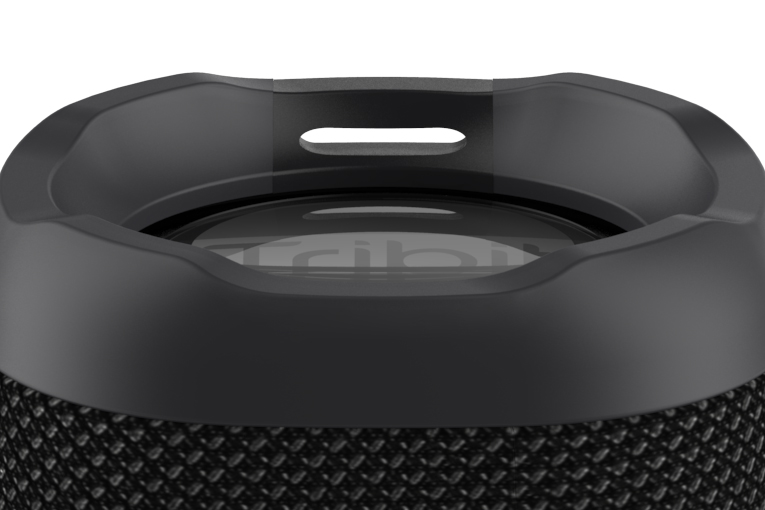 Robert Earl Keen’s West Textures (16-bit/44.1kHz ALAC, Sugar Hill) is one of my favorite country albums, and “The Road Goes on Forever” is one of my best-loved desperado ballads. It’s the story of Sonny and Sherry, who fashion themselves as a Bonnie & Clyde Lite. Sherry shoots a lawman, Sonny gets jail, and she gets a Mercedes-Benz. The track is replete with guitar chords, fiddle licks, banjo, and drums, and it all sounded very clean and crisp through the StormBox, given a firm foundation by the Tribit’s solid midbass -- and the speaker’s good reproduction of midrange presence made Keen’s slightly nasal voice instantly recognizable.

The “Prologue” of West Side Story (16/44.1 ALAC, Sony/CBS) contains a lot of crisp interjections from muted brass, as well as finger snaps, drums, bongos, and whistling. All of this challenged the StormBox’s transient response, but it passed the test, sounding quick and anything but muddled. The ensuing “Jet Song” was presented with a remarkably solid and accurate pizzicato line, strong in the midbass if understandably lacking in low bass. 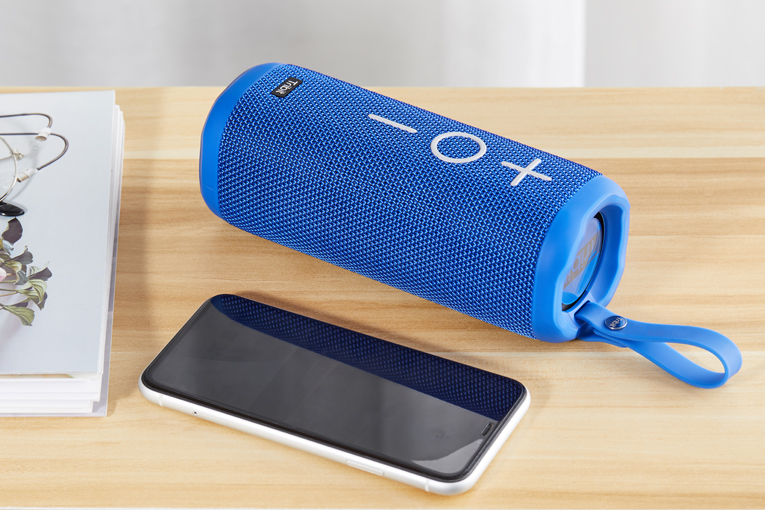 The StormBox proved a worthy alternative to Tribit’s MaxSound Plus. Easily portable, it can be used with Bluetooth and non-Bluetooth devices (though its waterproofing can be taken advantage of only with Bluetooth play). It sounds good, and connecting is easy. However, its bass radiators are exposed -- if you have a four-year-old who likes to test things by poking them, you might be better off with a MaxSound Plus. A full battery charge lasts long enough to cover a full day of play at moderate volumes. If you want a little Bluetooth speaker that can be stood on end, and paired with a duplicate unit for even more output, the StormBox might be the better choice. Then there’s the price -- much lower than the competition.

In short: If you’re looking for a compact Bluetooth speaker, you can scarcely go wrong with either Tribit. Having now produced two excellent speakers, this young company has established itself as a major contender in this market.