Bluetooth-enabled portable speakers have advanced to the point that we’re no longer amazed when such small boxes produce such big sound. Tribit has now upped the ante with a real speaker priced lower than any I’ve seen, and sold through Amazon.com ($55.99 USD).

The Tribit MaxSound Plus comes in a box tinted classic JBL orange. Open it to find the MaxSound Plus and its accessories: a 2’-long charging cord (USB to Micro-USB), a 2’-long audio connector (3.5mm to 3.5mm), and a shoestring lanyard (a nice touch!), as well as a small but useful instruction booklet, a warranty card, and a card that states that Tribit will contribute $1 to UNICEF if you post a review of the MaxSound Plus. The MaxSound Plus is warranted for tech support for the lifetime of the unit, for a full refund within 30 days, or for replacement within 18 months -- or 30 months, if you register your unit with Tribit. 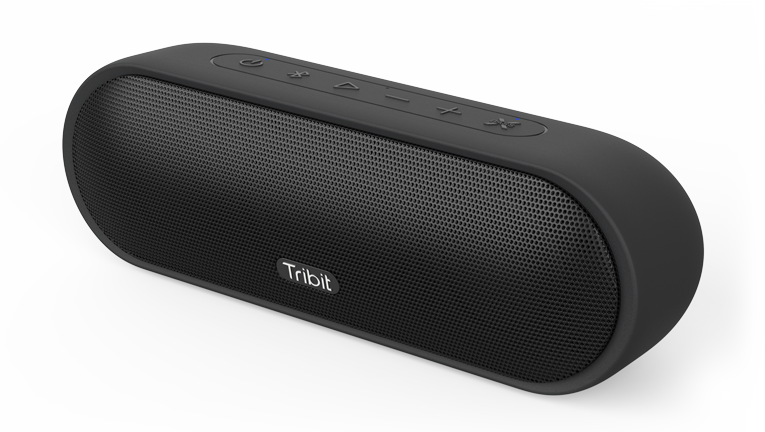 The MaxSound is shaped like a giant elongated tablet (as in Ibuprofen) measuring 7.8”L x 2.6”H by 2.7”D. It weighs only 21 ounces, but the first time I lifted it I was surprised at how solid it felt. It’s mostly made of rubberized plastic, with a plastic grille that covers the entire front surface, with a small Tribit logo at lower center.

The speaker’s rounded-off ends are free of controls, ports, or decorations; the bottom has four tiny rubber feet to keep the speaker stable on a flat surface. The back contains a plastic strip that has a built-in grille for the passive radiator and a sealable waterproof port, inside which are the USB charging jack and 3.5mm audio jack. Running along the top of the MaxSound are six soft-push buttons: power, Bluetooth pairing, MFB Taste, volume down, volume up, and XBass boost. MFB Taste is a multi-function button: press once to play or pause, twice for the next track, three times for the previous track. Next to the power and Bluetooth buttons are blue status LEDs; the XBass button has a white LED. 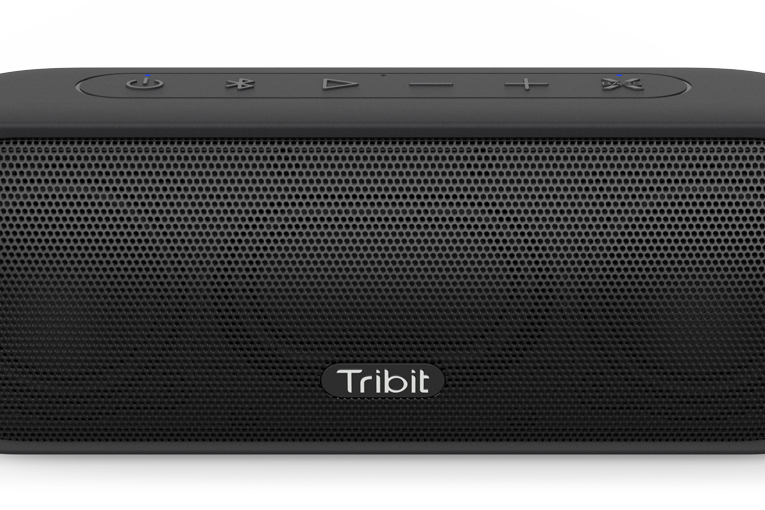 Other specifications include: compatibility with Bluetooth v.4.2 and profiles A2DP, AVRCP, HFP, and HSP; a frequency range of 80Hz-20kHz; signal/noise of ≥80dB; a battery charge time of four hours; and 20 hours of playing time at moderate volume on a full charge. An icon on the box indicates that the MaxSound Plus is waterproof (it’s rated IPX7), but under “Safety Precautions,” the manual cautions you not to submerge the speaker. Tribit confirmed for me that the MaxSound is waterproof, and that the manual needs to be rewritten to state: “Do not submerge for longer than 30 minutes.” They might also warn the owner to keep the rear port tightly sealed when using the speaker in wet conditions. I didn’t submerge the MaxSound, but I did take it into the shower with me a few times; it got thoroughly splashed but never stopped working perfectly.

The MaxSound Plus proved easy to use, and paired instantly with my devices. The Bluetooth LED blinks during pairing; successful pairing is announced by a bell tone, at which point the LED glows steadily. Other sound cues are soft up/down swooshes to indicate power on/off. The power LED glows red when the battery is low, green to indicate a full charge. 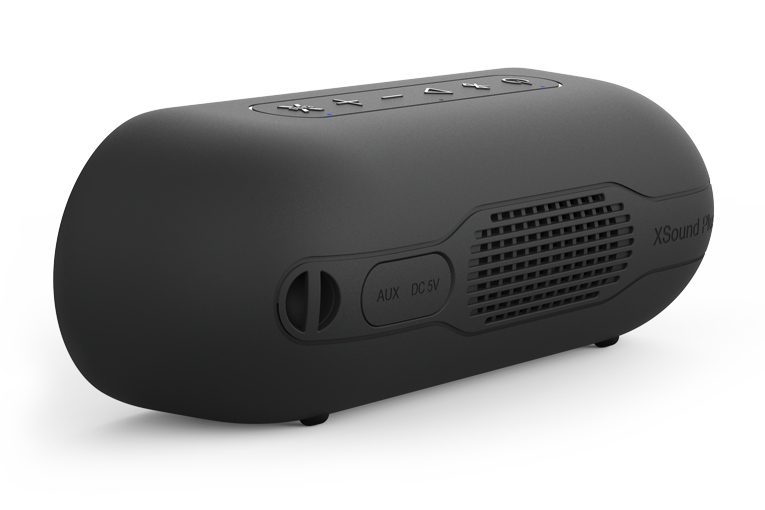 The speaker is easily portable. It fit my hand comfortably -- those with smaller hands can use the lanyard. The buttons worked as indicated in the manual, and the Bluetooth range covered my entire house. As claimed, it took four hours to fully charge the battery, though a full charge gave me only about eight hours’ playing time instead of the promised 20 hours -- then again, I was playing this little speaker at very high volumes.

Usually, when describing the capabilities of a small speaker, I modify “big sound” with the phrase “for its size.” This certainly applied to the MaxSound Plus. For such an inexpensive speaker it could play fairly loudly, with remarkable presence and detail. It will never be mistaken for a pair of floorstanders -- or even a single floorstander -- but it will sound immensely better than the speakers in your tablet, phone, or laptop. It’s also a true stereo speaker -- one driver is sent the left channel, the other the right -- but as those drivers are only a few inches apart, any stereo separation is minimal.

I found it best to leave XBass boost on. It added weight and a bit of warmth to the sound, without destroying the MaxSound’s amazing transparency and presence in the mids and highs. I was constantly hearing details that before I’d heard only with high-quality headphones -- which says a lot, considering how many of these devices I’ve listened to through the years. 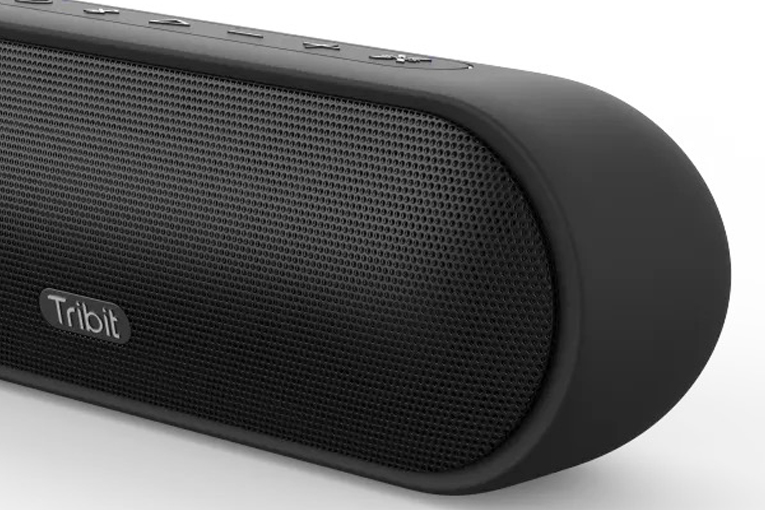 The recent film Rocketman has renewed interest in Elton John’s music -- assuming that interest ever flagged in the first place. I turned to Goodbye Yellow Brick Road (16-bit/44.1kHz ALAC, Island). The intro to “Funeral for a Friend/Love Lies Bleeding” was one of the most original ever when this album was released in 1973, and it still sounds pretty amazing today. It begins with the sounds of whistling wind, which increase in volume until a synthesizer enters. The track continues to get louder, the synth wailing, then subsides for a passage for piano and plucked bass. Then another surge, then a new style of sound. Another one or two changes, and John’s voice finally enters. It’s quite a little overture, and through the tiny Tribit I heard all sorts of details and nuances I hadn’t through bigger portable speakers. One example was the generous detail of the sounds of castanets. There was also impressive bass -- with the MaxSound Plus’s focus and lack of bloat, the bass tuning seemed balanced just right.

Classical music? Well, sure. Holst’s The Planets is a showcase of brilliant orchestration, and the recording with Vladimir Jurowski conducting the London Philharmonic Orchestra (16/44.1 ALAC, LPO), though more rapid than most, captures most of the instrumental color. The first movement, Mars, the Bringer of War, has a rhythmic pulse throughout, with a war-like marching figure under broad melodies. The MaxSound Plus reproduced this movement with a lot more sonic weight than I expected. In fact, it’s one of the very few small speakers I would recommend for classical listeners, for the oomph with which it produced sound. 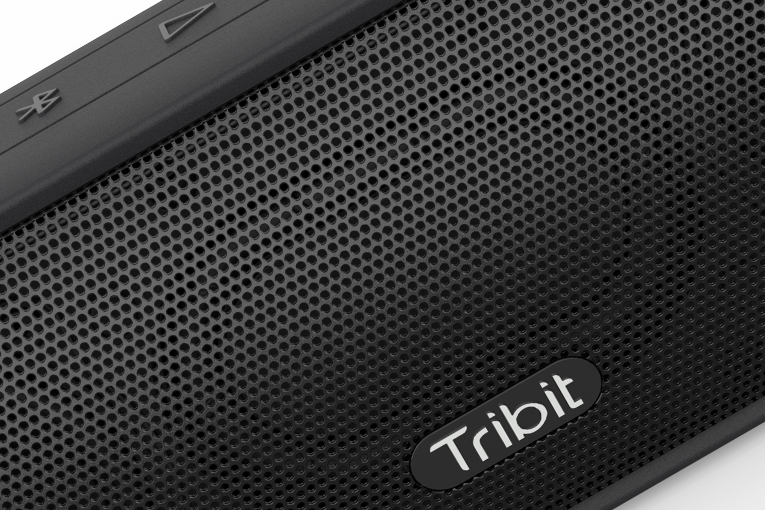 Jazz, too, sounded good through the MaxSound Plus. Hi-hat cymbals came through with purity, and kick-drum beats were alive and forceful -- in fact, the latter were amazing, considering this speaker’s tininess. Pianos were reproduced very realistically for a Bluetooth speaker, and the nuances of wind players were remarkably clean. Solo piano and guitar also sounded good through the Tribit.

Tribit’s MaxSound Plus is the little Bluetooth speaker that could. Solidly built and small enough to travel, it has a sound big enough to please almost everyone. It has great connectivity, it’s waterproof, a full battery charge lasts a long time -- and it costs far less than comparable Bluetooth speakers. My only complaint is that its otherwise excellent manual needs to be more clear about just how waterproof it is, and how to keep it so. Most important, the MaxSound Plus proved to me that it’s no cheap knockoff, but a speaker that can compare with those costing much more. Which is why it earns my highest recommendation, and a Reviewers’ Choice designation.