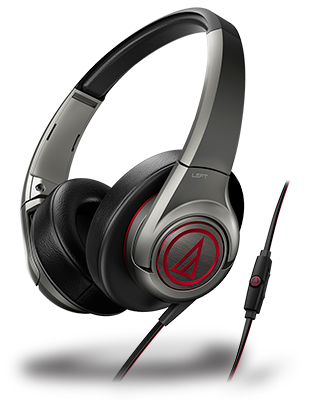 The ATH-AX5iS over-ear headphones ($89.95 USD) are part of Audio-Technica’s SonicFuel series, which is otherwise devoted to in-ear models. Although they have large (40mm) drivers, the ATH-AX5iSes have a slimmer profile than most over-ear ’phones, and would seem to work for both sports and general listening.

. . . are the headphones, a carrying case, a quick-start guide, and a safe-disposal pamphlet. The case is much nicer than the norm at this price, being made of sturdy fabric and having a drawstring.

The headphones are mostly made of plastic, in this case acrylonitrile butadiene styrene (ABS), though I feel there must be some metal somewhere in the headband. The ATH-AX5iSes come in black or gun-metal gray; there’s a small ring in red (with gray ’phones) or blue (with black ’phones) around the earcup where it meets the earpad, and on the outside of each cup is the Audio-Technica logo in red or blue. The left and right channels are identified by small but readable letters at the top of each earcup assembly. It’s a simple, neat design that’s quite stylish. The oval earcups measure 3.5” x 2.75”; when they’re folded in, the ’phones are 7.5” x 7” x 2.75”, and they’re fairly light: just 5.4 ounces.

The 4’-long, color-matched cable (red, in my case) is permanently fastened to the left earcup, the cable being the new flat sort that doesn’t seem to tangle. There are no controls on the ’phones at all -- just a single multipurpose control 6” down the cable from the headphones. A round push-and-click button lets you pause or resume play, skip forward or back, and receive calls from your smartphone. On the control’s side is a tiny rocker switch to control the volume. 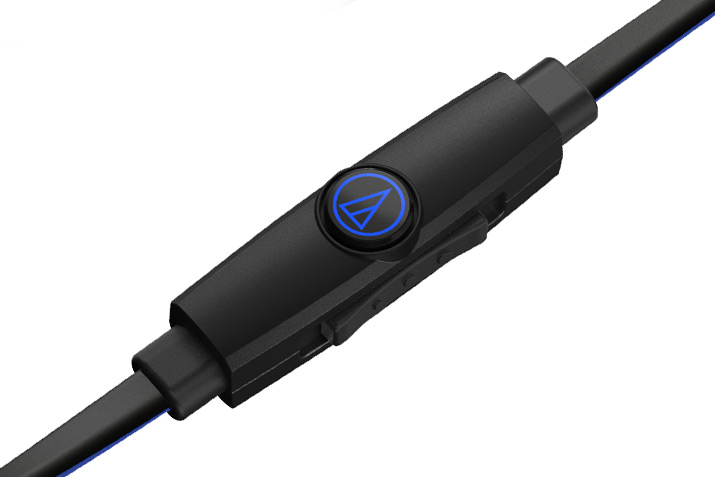 The frequency response is a claimed 5Hz-25kHz. The maximum input power is 1000mW, the sensitivity 105dB/W/m, and the impedance 55 ohms.

I found the ATH-AX5iSes a good fit for my head, and very comfortable. Because they’re so light and have such a narrow profile, I found them one of the few over-ear models I could recommend for the gym, and surely also for running or biking. I found the control a bit of a nuisance. The switch was so placed that when I tucked it inside my shirt, I couldn’t see it -- but anywhere else, it was hard to reach. The play/pause/skip button was easy to press and worked fine, but the volume up/down rocker was something of a challenge for my fingers. I gave up on it, instead setting the volume wide open and controlling it from my source devices. I’ve come to prefer controls that are on the headphones themselves, such as the one on Outdoor Tech. Privates, which I reviewed last month.

The Outdoor Tech. Privates also came to mind because the AX5iSes sound a bit like them, with a solid, clear midrange and a slightly rolled-off treble, but more bass. The opening of Sir Charles Mackerras’s reading of Handel’s Water Music with the Orchestra of St. Luke’s (16-bit/44.1kHz ALAC, Telarc) had an increased richness and vigor through the Audio-Technicas. 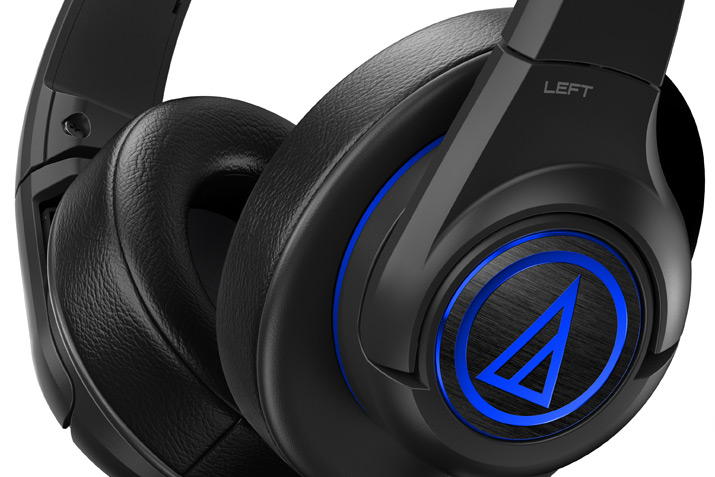 The emphasized bass caused David Bowie’s Modern Love (16/44.1 ALAC, EMI) to leap out at me. The bass in “Let’s Dance” was particularly prominent, but not at the expense of the midrange or upper frequencies. The title track of Michael Jackson’s Bad (16/44.1 ALAC, Epic) had lots of oomph and very good clarity in the vocals. The drum strokes in “Cecilia,” from Simon and Garfunkel’s Bridge Over Troubled Water (16/44.1 ALAC, Columbia), had almost savage presence, but the voices easily soared over them. Overall, I’d say that the ATH-AX5iSes were moderately good at isolating the music from outside sounds.

Audio-Technica’s ATH-AX5iS headphones are in no way outstanding, but they have competently good sound, and they’re lightweight and easy to wear for just about any activity. I don’t like the cable’s inline controls, and wish the cable was detachable. On the other hand, Audio-Technica provides a nice carrying case, the price is low, and there’s a generous warranty of two years. I’d think of these as a backup pair of headphones to use when I can’t find my best ones.