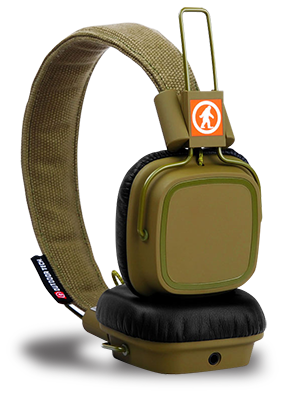 Ever since I began writing this column, I’ve been looking for the perfect Bluetooth headphones to accompany my gym workouts. The spiffy new Privates, from Outdoor Tech. ($99.95 USD), have come closest to filling that bill. They look good and sound good. Naming them the Privates invites every bad joke on the planet, but this is for sure: You won’t forget the name.

Everything about the Privates screams “Cool and innovative!,” beginning with the all-plastic box: clear in front, black on the other surfaces. The ad copy on the box conveys “cool” facts about the headphones: e.g., the Privates can be used via wireless Bluetooth, or with an included braided cable of the same color as the ’phones: Black, Turquoise, Mustard, or Military Green. Inside are the Privates and their audio cable, a charging cable (Micro-USB to USB), a clearly understandable -- and readable -- fold-out instruction sheet, two Outdoor Tech. logo stickers, and a carrying bag.

The Privates are retro in design, with a canvas-covered headband and 2.5”-square, nicely padded earcups covered in leather-like plastic. The earcups are held in a wire frame that slides up and down on the headband, and swivel easily to provide further adjustment. Each earcup assembly folds up, to make the headphones easier to fit into the carry bag. An Outdoor Tech. logo appears on each earcup frame, and, on the headband, there’s a logo tag much like the ones found on the back pockets of jeans. In each earcup is a 1.5” (40mm) driver. The claimed frequency response is 20Hz-20kHz.

The jack for the audio cable is on the bottom of the left earcup. On the right earcup are a USB charging port, and a white pushbutton that stops and starts play or answers phone calls, and that changes color to indicate pairing and on/off status. When the Privates are paired and playing music, the control glows a fairly bright blue every few seconds, much as other Bluetooth devices do. To change volume, or skip or repeat tracks, you merely swipe the right earcup with your finger: up or down changes volume, side to side changes tracks. 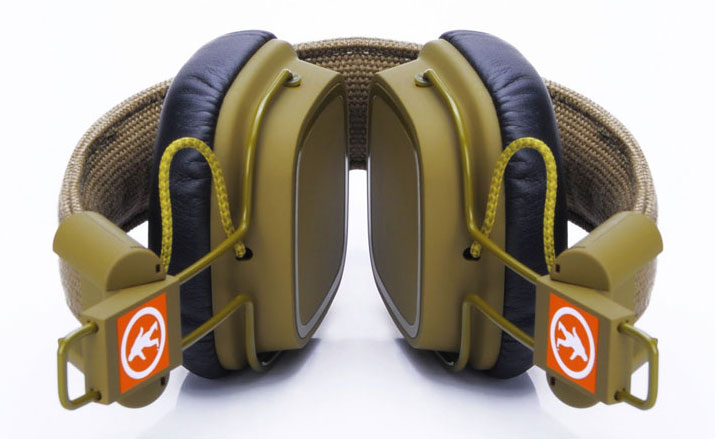 The Privates weigh 5.6 ounces and, folded up, measure 6” x 7” x 2.5”. Outdoor Tech. says that the rechargeable battery, for Bluetooth use, will last some ten hours on a full charge and will recharge in about two hours.

I found the positioning of the Privates very important. With most on-ear headphones you lose a lot of sound, as you can tell by pushing in slightly on the earcups: the sound gets much more full. But once I’d properly adjusted the Privates to fit my head, there was no loss of sound -- in fact, I got great sound. They were very comfortable, even after 90 minutes, and I could do my entire workout without their coming loose. That stability is partly because the headband’s underside, too, is covered in canvas. Most headphones have smooth headbands, which makes them more likely to slide.

The controls were very easy to use. It took a while for my fingers to remember exactly where that button was, but once they did, it was a snap to stop and restart play -- the button has just the right amount of tension to make the operation easy but firm. It also took a few times to get used to the swiping motions needed to control volume and skip or repeat tracks, but once I got used to it, it took very little effort -- I found I could issue commands with a light swipe only 1” long. Overall, the Privates’ minimal controls were the easiest to use of any headphones I’ve tried.

The range of Bluetooth operation was about normal: 25-32’ before dropouts became a problem.

Appearance, style, comfort, and ease of use are all important, but the most important thing about a set of headphones is their sound. And for their price, the Privates delivered astonishing sound quality, whether via cable or Bluetooth. Everything I heard through the Privates sounded musical, and they did justice to all musical genres. The overall sound was full yet transparent, with bass that was appealingly, not insanely boosted. The mids were transparent, the highs just a bit rolled off, in a balance very close to what I hear from my MartinLogan speakers.

One of my favorite classical works is Rimsky-Korsakov’s Scheherazade (16-bit/44.1kHz ALAC, Decca). I like different aspects of various recordings of this work -- of which I have more than 20 -- but I always come back to Ernest Ansermet’s: It’s the most satisfying to me -- and the best recorded. The Privates reproduced it in stunningly well-balanced sound. The upper strings were bright but oh, so sweet, the woodwinds were dulcet, and the brass were commanding and angry in the final movement, as Sinbad’s ship breaks apart on the rocks. Everything was so clean and clear that I felt that I could listen into the orchestra to hear things I seldom hear. 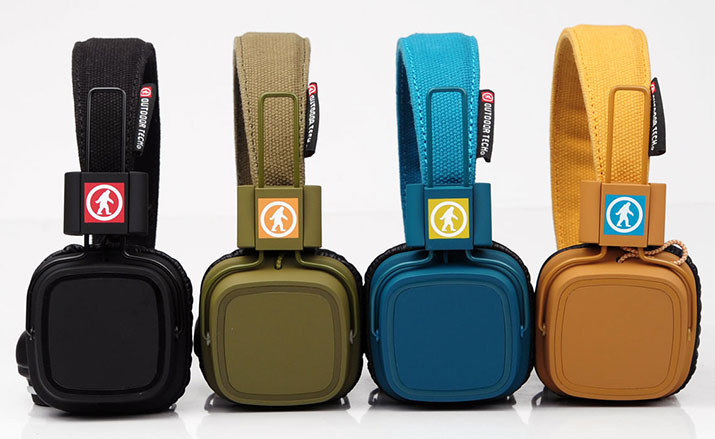 I then played Peggy’s Lee’s Basin Street East (16/44.1 ALAC, Capitol). The Privates’ clarity was evident everywhere, but never more so than in the sizzling rendition of Lee’s signature song, “Fever.” The attacks of the bass-drum thumps throughout were visceral, and the entire track so transparent that I could, unfortunately, hear comments from the audience.

I’ve found albums by the J. Geils Band to be ideal to work out to, and Love Stinks (16/44.1 ALAC, Capitol) is no exception. “Night Time”’s pounding keeps me going, but through the Privates that heavy bass didn’t obscure such details as the piano glissandos scattered throughout the track. The rest of the album sounded fine, too -- especially “Just Can’t Wait,” which has an especially punchy bass line, and “Come Back,” with Stephen Bladd’s stressed-out drums just pounding away.

The Outdoor Tech. Privates are stylish, can be used wired or wirelessly, fold up for easy packing and conveyance, and sound like much more expensive headphones. They’re the best on-ear headphones in their price range that I’ve heard. From time to time I still use my previous favorites, RHA’s SA950i ’phones ($59.95) -- but they have no wireless function, and their headband isn’t as secure as the Privates’. The Privates and the SA950i’s actually sound a bit alike, and each belies its low price. And the Privates are available in a variety of interesting colors and come with a carry bag.

New headphone models seem to appear every day, but for now, the Outdoor Tech. Privates are my choice for the gym, and I use them around the house as well. You’ll probably giggle the first time you say the name, but you won’t forget it.