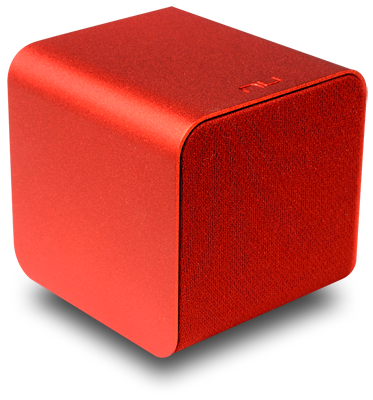 Imagine a cube into which a tennis ball could perfectly fit and you have a good idea of the size of the NuForce Cube compact portable speaker. It’s amazing to think that this tiny aluminum box contains a speaker worthy of notice, and even more amazing to know that it can also serve as a 16-bit/48kHz USB DAC and a headphone amplifier, all for $99 USD.

A box in a box

The NuForce Cube comes in a transparent plastic cube that looks almost exactly like the one Apple used for its sixth-generation iPod Nano. In it is the Cube, a USB cable, a 3.5mm stereo cable, a soft drawstring carry pouch, and a leaflet containing brief instructions, safety warnings, and information about the one-year limited warranty.

The Cube measures 2.28" x 2.28" x 2.34" and weighs a mere 5.9 ounces. It’s mostly aluminum and comes in a choice of four colors (with matching grillecloth): black, silver, red, or blue. The build is solid as a rock -- all thoughts that the Cube might be a toy vanished when I picked it up. It has four rubber feet, and on the back are three jacks: a 3.5mm Aux input for connecting a portable device, a 3.5mm output for headphones, and a USB connection that allows you to charge the Cube’s batteries and use it as a DAC. NuForce claims eight hours of playing time per charge.

Around front, an LED behind the grillecloth indicates the Cube’s status: It blinks when the Cube is charging, and glows solid red at full charge.

The Cube’s built-in lithium battery must be charged before it can be used. The USB cord that NuForce provides can be used only to charge from a computer or device with a USB out connection. You can, however, find adapters for very little cost that will let you plug USB into a standard AC receptacle for charging purposes.

Once charged, the Cube is absolute simplicity to use. If you want to use it with your portable music device, say an iPod, you plug the included cord into the Cube’s Aux input and your device’s headphone output. If you want to use the Cube as a headphone amp, connect as before and plug your ’phones into the Cube’s headphone output, which automatically mutes its speaker. If you want to connect to your computer, plug the USB cord into both Cube and computer. The Cube automatically bypasses your computer’s soundcard and acts as a DAC. 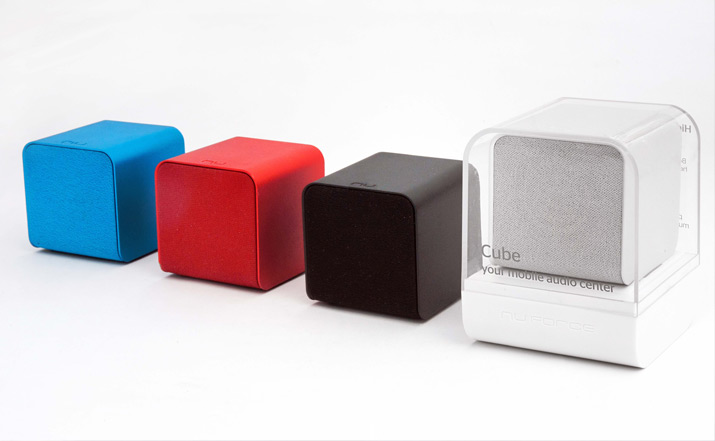 The Cube has no volume control; you must use the one on whatever device you plug into it. The Cube’s power is automatically handled through the USB connection: Plug something into it and the Cube turns on. This is convenient in one way, bad in another: If you forget to unplug the Cube when you’re through listening, it will remain on and its battery will run down. This seems true only of the Aux input. If you’re connected via USB, leave that in; you’re connected to a computer, and the Cube will charge even when it’s not being used.

I’ve used the word automatically a lot here, but the term is apt. The NuForce Cube is entirely easy to operate, and its tininess makes it exceptionally portable. The carrying pouch is not a bad idea; it will keep the Cube’s aluminum surfaces from becoming scratched.

NuForce sells a special, angled, two-pronged connector for the iPod Nano that has no wires and makes it very easy to transport the resulting NanoCube as a single unit.

The NuForce Cube had a surprisingly appealing midrange sound, accurate and transparent. Its highs were good, too, generally reflecting the material being played. There was no real bass, just implied bass resulting from overtones and doublings. Listening to a familiar recording, my brain would partially fill in the bass I knew was there, but bass seemed lacking from unfamiliar tracks.

Recordings of solo guitar didn’t demand bass, nor did female voices, so many recordings sounded really good through the Cube -- including some jazz, depending on the instrumentation. But rock lovers can forget the Cube. That genre requires a bigger box, such as the Jawbone Jambox, or one of Logitech’s many excellent portable speakers.

That in mind, I listened to "All I Want," the first track of Joni Mitchell’s Blue (ALAC 16/44.1, Asylum); its arrangement of voice, Appalachian dulcimer, and acoustic guitar was right in the Cube’s ballpark. Mitchell’s voice sounded pristine, and the stringed instruments detailed and clean. 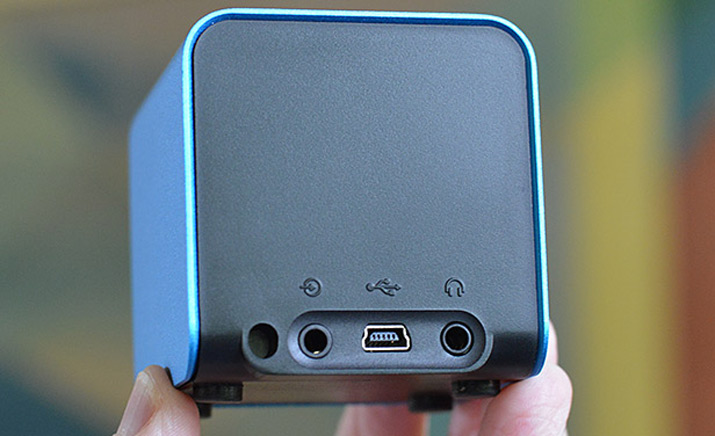 That success led me to The Bounty Hunter and its title song, my favorite from that album by North Carolina’s Mike Cross (ALAC 16/44.1, Sugar Hill). The arrangement has all sorts of plucked instruments -- guitar, banjo, harp -- as well as background singers. The Cube impressed me with its ability to reproduce this mix with absolute fidelity. But this was another track that didn’t require it to reproduce much actual bass. When I turned to "Keeping the Road Hot," from the Nitty Gritty Dirt Band’s Hold On (ALAC 16/44.1, Warner Bros.), I had to deal with the implied bass mentioned above.

After listening to a few more cuts, I plugged the Cube into the computer so that the NuForce was using its own DAC to process the music. Then I listened to the same selections I’d just heard. My computer has a very decent soundcard, so I couldn’t hear much difference. But if you have a laptop with a lesser soundcard and bad speakers, you’d probably notice quite a bit of difference.

I did notice a difference using the Cube’s headphone jack. The NuForce seemed to clean things up a bit, blowing away the cobwebs. With my personal music devices used as sources, volume levels were restricted, and that’s one thing about the Cube that I found a bit lacking. The volume level was always adequate, but I had to open the iPod Touch and iPod Nano 100% to achieve that. At 75%, I could barely hear the Cube. When I plugged the NuForce into my main stereo system, I found that all that extra power easily drove it to maximum levels.

The NuForce Cube has a lot of things going for it. It’s extremely portable, and its build quality is solid. At moderate volume levels, it offers clean and appealing midrange sound, and bright yet unbrittle highs. If you’re looking to bypass and replace the anemic sound you get from an iPod or iPhone, or perhaps a laptop, you’ll get much better sound with a Cube.

On the other hand, the Cube can’t serve as a source for intense music listening; it’s better for background music. It doesn’t output stereo, and it has little bass to speak of. And if you need only a speaker and won’t benefit from using its DAC or headphone output, the Cube is priced a bit high at $99. But if you’re looking for something very small and decent sounding to take to lunch along with your laptop or iPod, it might be just the thing.