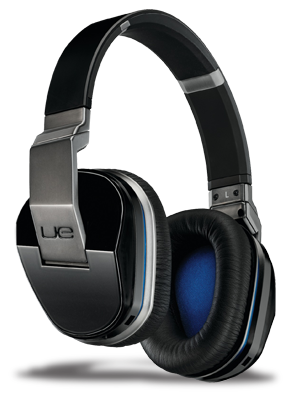 Logitech acquired Ultimate Ears four years ago, and have now come out with a line of UE-branded products that includes a smart radio, wireless speakers, and wired and wireless earphones and headphones. The wireless UE 9000 ($399 USD) is their newest model of what I think of as commuter or frequent-flier headphones. Such designs have large earcups (aka “cans”) that cover the entire ear and can often reproduce good bass. Most such designs are built to withstand abuse, have active or passive noise cancellation, are optimized to work with smart phones and iPods, and come with a durable, hard-shell carrying case.

Portable, commuter ’phones aren’t sports headphones -- wearing them while doing anything more active than walking would be a chore. Still, they’re more durably built than the average set of home ’phones. They most benefit those who regularly commute and want to take their tunes with them without losing much in the way of sound quality. Wearing such a device gives one the appearance of being someone who wants to be left alone to chill with his tunes. This is perhaps perfect for a crowded subway car, where you don’t want to talk with anyone or be too bothered by their noise: You can feel safe and secure in your own isolated audio world.

The packing boxes for this class of headphone have so far all proven ingenious and space saving, and the one in which the Logitech UE 9000s arrived was no exception. The box is covered by a slipcase covered with photos and ad copy. Remove that to expose the plastic box, and pull up the ribbon to reveal the UE 9000s nested securely inside. Pull two more ribbons to lift out the ’phones, and expose the accessories case, and neatly tucked inside that are: an additional cable with on-cord microphone and controls, a 0.25” adapter jack, a USB charging cable and AC adapter, a microfiber polishing cloth, and a user guide and warranty sheet.

It’s a plus to have those ribbons for unboxing, so you don’t have to go digging with your fingers. The case is quite solid, and has a cool gray-and-blue design but no carrying handle. Instead, it tucks comfortably under one arm. There’s a net pouch for accessories, but if you stuff it too full it might come into contact with the ’phones, and you don’t want to risk scratching their beautiful surfaces. It’s probably best to use the pouch for only the polish cloth and user guide. I suppose you could carry the optional cord in there, but be careful. The cord is blue, to match the case and ’phones, with gold connectors.

One look at the UE 9000s and you’ll see why that polish cloth is included: the ’phones are made of gleaming plastic and metal. For storage, the earcups fold at a 95° angle along rotating metal joints that look and feel as if they’ll last a long time. The earcup cushions are thick and comfy, and the overall design spells out quality build and class. The headphones are adjustable on both sides. They weigh around 13 ounces, have 40mm drivers, an impedance of 32 ohms at 1kHz, a sensitivity of 105dB (1kHz/1mW), a claimed frequency response of 20Hz-20kHz, and a claimed 26dB of noise isolation.

The UE 9000s are compatible with most Apple products -- under Compatibility on its website, Logitech posts a list that you can check to make sure the UE 9000s will work with your device. With earcups measuring 3.5” x 1.75” x 2” thick, the UE 9000s are on the smallish end of the scale for this class of ’phone. They can be used as wireless Bluetooth (there is a rechargeable battery) or as wired devices.

The UE 9000s sat comfortably, though it took a while to find the right position. The headband needed to be a little forward and secured pretty tightly to my head to ensure that the ’phones wouldn’t rock back. After putting them on a half-dozen times, I got it exactly right from then on: The earcups fit snugly and comfortably, without pinching. 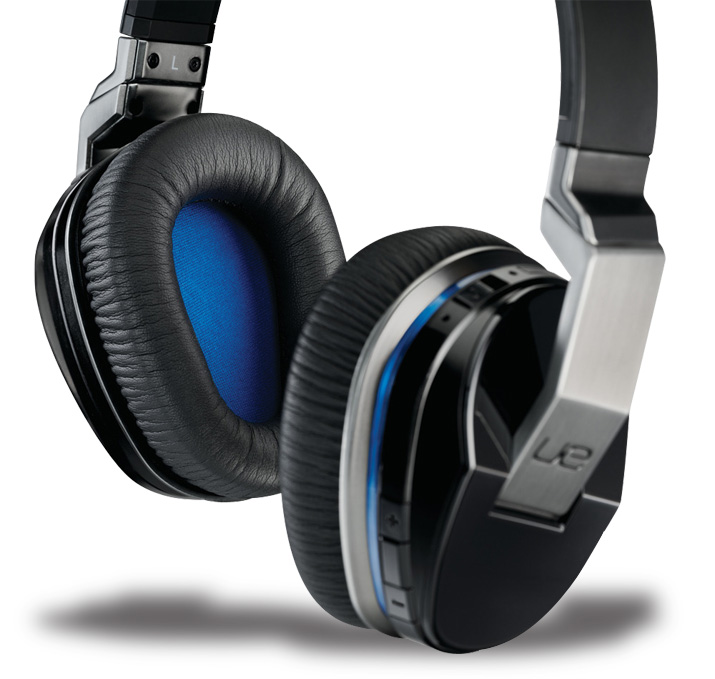 There are few controls. On the left earcup is a button labeled Listen Through -- push this to hear what’s going on around you without removing the ’phones. The rest of the action is on the right can: separate up and down controls for volume, and between them a multipurpose control. Click the latter once to pause play, twice to skip to the next track, and three times to return to the previous track. This control also serves to answer and end phone calls. The navigation controls work only when you’re wirelessly connected via Bluetooth; they don’t work when the cable is used. These controls are flush with the earcup’s surface, to make a clean design, but have slightly raised icons so you can feel your way around. It took me a few sessions to be able to operate them comfortably, but that’s been true of all headphones I’ve tested.

At the top of the right earcup is a slider that serves as an On/Off switch; sliding it to the right begins the process of handshaking with Bluetooth. There is an LED to each side of this switch: a green one to show battery status, and a blue one to display Bluetooth status. At the bottom of the cup are connection ports, a mini USB for charging the ’phones, and a socket for the audio cable.

It’s thoughtful of Logitech to have included the 0.25” adapter jack. If you’re just plugging into your Apple products, you won’t need it, but if you want to plug the UE 9000s into your home preamp or receiver, you’re liable to need that adapter, depending on when your preamp or receiver was built.

Unless you’re going to use the UE 9000 wired, the first thing you’ll need to do is charge its battery. Plug the charging cable into a USB port on your computer, or plug the AC adapter into a wall socket. Logitech claims about ten hours’ use per charge, but that will vary with how loudly you listen.

The next step is to get the UE 9000s to communicate with your device’s Bluetooth transmitter. Slide the On/Off switch to the right, until the blue LED starts blinking rapidly. Set your device into pairing mode and after a bit the units should connect. I found that this process took a little bit longer than it has with other Bluetooth units, but patience was rewarded with a firm connection. Pairing, however, revealed the one really negative thing about the UE 9000s: The slider switch is right at the metal hinge. When you slide it, you slide your finger or thumb into the hinge, the latter acting like a stop. Moreover, the blue LED is somewhat hidden under the hinge (especially if your finger is in the way), depending on your sightline. It’s a surmountable issue, but an irritation in a model that has no other major problems.

Once the two units have successfully shaken hands, all that’s left to do is listen. I did this mostly using my iPod Touch, since the UE 9000s are optimized for Apple products. You can connect with anything that has a Bluetooth transmitter, or wire up the UE 9000s to any device that will output a signal, including your main system’s preamp or receiver. There are no tone controls or bass boost; you’ll need to adjust the frequency response using your phone or iPod.

The UE 9000s’ active noise cancellation worked very well to block out or diminish outside sounds.

Logitech claims to have used special “high quality codecs, advanced digital processing and our robust Bluetooth implementation for reliable connectivity, enhanced range and longer battery life.” I enthusiastically confirm the connectivity. When using Bluetooth wireless, I was able to roam all over my house and always get a clear signal. The battery life also seemed to be close to the advertised ten hours (or 20 hours with a wired connection).

That “enhanced range” is another issue. Bluetooth compresses audio signals, and many writers and listeners have complained that it doesn’t provide enough dynamic range and frequency response to be seriously considered as good sound. Ultimately, it comes down to how much sound quality you’re willing to sacrifice on the altar of wireless convenience. The UE 9000s produced as good sound via Bluetooth as I’ve heard.

There was a difference between the UE 9000s’ Bluetooth and wired sounds, however. Wired, the sound opened up with greater transparency, and was generally devoid of the harshness or congestion I occasionally heard while using the Bluetooth connection. As wired headphones, the UE 9000s were excellent. With their smooth frequency response and noise cancellation on, I could really lose myself in the music. I did just that with “Traveling Boy,” the first track of Art Garfunkel’s Angel Clare (16/44.1 ALAC, Columbia). The rather thick arrangement had nice transparency, and clearly reproduced Garfunkel’s voice without any unwanted angst.

The sound of “Fever,” from Peggy Lee’s Basin Street East: Miss Peggy Lee (16/44.1 ALAC, Capitol), was that of an intimate jazz club; Lee’s sexy voice, the double bass, and the drums were perfectly balanced. (If you haven’t heard this performance, it’s far superior to Lee’s hit studio version.)

When I listened to the same selections via Bluetooth, the sound had a little more presence, the bass was fatter and a bit more prominent, and the midrange was forceful but a little less transparent. It was two different sorts of sound -- wireless was more exciting, and wired perhaps more tonally satisfying in the long run -- but both sounded far better than average, and the UE 9000s give you the choice. I think your choice will greatly depend on the type of music you’re listening to. I preferred wired for classical, Bluetooth for jazz and rock.

Logitech’s UE 9000s have a lot going for them. They’re solidly built, have a shiny, gleaming appearance, provide excellent sound whether used wired or wireless, and come with a practical carrying case and a better-than-usual warranty. What’s not to like?