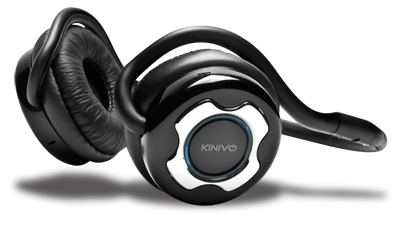 When I began writing this column over a year ago, it soon became evident that a great percentage of the personal audio products I would cover would be headphones. I discovered Bluetooth, and one of my first reviews was of the Sony DR-BT21G Bluetooth headphones. At the end of that article, I compared them to the jWIN JB-TH710 Bluetooth ’phones. I recommended the purchase of the jWIN set, along with Sony’s TMR-BT8IP Bluetooth transmitter, which can be used with most Apple iPhones, iPods, and iPod Nanos.

But things move quickly in the electronics world. Just as the review was published, the supply of jWIN headphones dried up -- jWIN had dropped the Bluetooth model. I felt terrible about this, having recommended a bargain that was already gone forever.

While browsing the Internet to see what new Bluetooth ’phones might have come along lately, I saw a familiar photograph. It was the jWIN, come back to life. Closer inspection revealed that it was actually the Kinivo BTH220 Bluetooth stereo headset. The list price is $44.99 USD; I ordered a pair from Amazon for $29.95, with free shipping. When they arrived, I placed them next to my jWIN JB-TH710s. Except for the company logo, it was impossible to tell them apart.

Evidently the headphones are made somewhere in China, and jWIN ran out of steam as a distributor. The manufacturer read some of the many good reviews of the jWIN JB-TH710s, shopped around for a new distributor, and chose Kinivo, based in Redmond, Washington. Kinivo tells me that they intend to keep the BTH220s in stock. I can once again recommend a bargain and, unless entirely misinformed, rest assured that it will continue to be available.

The Kinivo BTH220s come with a charging cord, a soft carrying case with drawstring, and a concise, clearly written user manual. The cord is USB-to-mini-USB; if you want to charge from AC, you’ll need to buy a converter box. Some of these are pretty useful: I can plug the one I have into the wall and have two USB charging ports available.

Like most inexpensive sport headphones, the Kinivo has a nonadjustable headband, but folds into a compact 4.5" x 2.5" x 1.5" and weighs only 2.5 ounces. At first I thought the spindly fold joint was liable to break, but I’ve folded and unfolded these (and their lookalike predecessors) dozens of times, with no ill effects. Likewise, the little rubber plug over the charging port looks fragile but proved strong.

I put the Kinivo BTH220s through my usual gym and walking workouts. They were very comfortable. Although at first they didn’t seem to fit snugly enough, no matter what position I was in they never came loose, or even threatened to take unexpected flight. The earcups are about 2" in diameter -- rather smaller than many others -- and protrude about 1.5" from my ears. This made me look a bit nerdy with them on; that didn’t bother me at all, but it might concern others.

The Kinivos were difficult to pair with the Sony transmitter. It took patience and quite a few tries, but after the first-time ordeal, they now pair almost instantly. To pair, you push down the round button on the right earcup until you see red and blue flashing lights. When the Kinivo BTH220 has successfully shaken hands with the transmitter, only the blue LED will blink, every few seconds. There’s no way to turn this off, and it seems to bother some people. I felt it created a cool, nerdily techno look. All Bluetooth ’phones I’ve tested so far have such a flashing LED, as does the Sony transmitter.

On the right earcup is a cloverleaf rocker control with a round button in the center (the button on this model bears a phone icon). The rocker controls volume up/down and skip forward/back; the button is a play/pause toggle. These simple controls were easy to use -- after I’d tried them three or four times they seemed instinctual and friendly, and never failed to deliver the desired result. There are also ways to use that button for phone calls, and there’s a built-in microphone, but I didn’t use the BTH220s with a smart phone, so I can’t report on its performance in that regard. 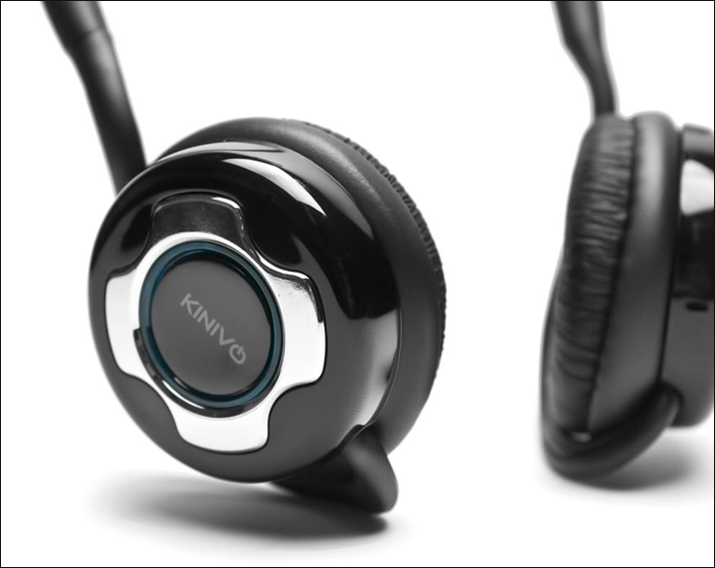 I could receive signals accurately up to 25’ away from the transmitter. Kinivo advertises eight hours of music time, and I never ran out of power. Then again, I’ve made it part of my daily routine to charge all of my devices overnight. That way, I’m always sure they’re ready to go the next day.

The Kinivos sounded very open and free, with entirely adequate bass, and surprisingly crisp, clean highs that never became brittle. As with most headphones of this nature, the midrange was slightly emphasized. My iPod Nano has over a dozen equalizer settings, and the Kinivos were sensitive enough to let me hear all the subtle and not-so-subtle differences among them. I finally settled on Acoustic, which had enough bass but didn’t cut the highs back too drastically. The BTH220 has volume limiting: If you’re turning up the volume and hear a pinging bell, you’ll know you’ve gone as far as you can. For me, that was always plenty loud enough.

It was easy to discern the octave doublings in "Harry’s Wondrous World," the first track of the Prague Philharmonic’s sonorous recording of John Williams’s music for Harry Potter and the Sorcerer’s Stone (16/44.1 ALAC, Silva 1206). The ensuing melody for strings was rich and full, with a just-right edge, even when it soared to a high register. The more tinkly percussion instruments, such as bells and triangle, came through just fine, too, with just the right amount of brightness. The hard-driving title song and country-rock anthem of Christian Kane’s The House Rules (16/44.1 ALAC, Bigger Picture) pounded hard, and was focused enough to power-drive a good jog without sacrificing too much clarity.

The Kinivo BTH220 headphones are a real bargain. They won’t sound as good with music as do larger, noise-canceling headphones from any number of high-end brands, nor do they cost the $300 and more that those ’phones do. Besides, those models aren’t made for sports, or even for walking. You never want a noise-canceling headphone for physical activities, because you can’t hear the sounds you need to hear to keep you safe from accident or injury. Anyway, I’m not sure you’d want to put an expensive set of headphones at risk by wearing them outside of your listening room.

The Kinivo BTH220s offered very exciting, very good sound, as well as the freedom of wireless Bluetooth. (Warning: Once you’ve experienced this freedom, you maybe never want to be wired again!) And they cost amazingly little. Amazon sells them for $29.95, but you can probably find them for less. At that price they’re a true bargain, and high on my value-for-dollar list. I’m happy to have rediscovered them.