When I bought my Apple iPod Touch several years ago, I was excited by its versatility, and particularly looked forward to being able to carry it around with me to retrieve e-mail, listen to music via the Internet, and get the latest news. I’d ruled out an iPhone as being too expensive -- the phone itself, and the mandatory service plan. I eagerly read articles that promised more powerful Wi-Fi, more hot spots, and greater range. They never appeared, and still haven’t as I write this. Citywide networks exist, and some of them are free -- but not in my town. I depended on stores and other businesses to provide local Wi-Fi networks. I sought out all the local places (mostly coffee shops) that provided free networks because they know that offering Wi-Fi is a good way to bring in business. When I got my iPod Touch, I haunted Wi-Fi-enabled places just so I could use my cool new device. I drank a lot of coffee.

But after the Touch’s newness wore off, I began taking care of Internet-related business while at home, and just left the Touch behind. I’d heard about Virgin Mobile’s MiFi devices, but they, too, were expensive -- might as well buy an iPhone as subscribe to MiFi. But a month ago, while visiting Walmart, I saw that the price of Virgin’s MiFi 2200 Mobile Hotspot had fallen to $99.99 USD, and that the service plans had changed. Suddenly, MiFi seemed reasonable. No more driving around to connect -- if I couldn’t find a Wi-Fi network, I’d carry my own.

It may be a small point, but I was impressed with one thoughtful feature of the MiFi 2200’s packaging. The same loop used to hang the box from a display rack is the handle with which you pull the plastic tray holding the device from its tightly fitting cardboard box. In that tray is the MiFi 2200, a battery and charger, a USB cord, a skimpy startup guide, a heftier terms-of-service pamphlet, and a lightweight carrying case that’s more like a carrying sleeve. 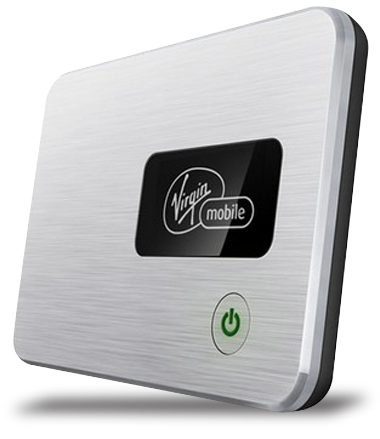 The MiFi 2200 is 3.5"L x 2.4"W x 0.25" thick -- almost exactly the size of a credit card, though as thick as seven or eight of them. That’s pretty small, but the 2200 is solidly built. There’s a single control: a slightly recessed power button on the top. Along one edge are a mini USB port and a pilot light. A panel on the back slides off to reveal the rechargeable battery. And that’s it; simple as could be. Oh yes -- it weighs two ounces.

To activate the MiFi 2200 you insert and charge the battery, then turn it on. It should show up on your computer’s Wi-Fi manager as "VirginMobile MiFi2200." You connect, enter the password (it’s on the rear panel), and click "OK." You’ll be guided to a page where you’ll create a Virgin Mobile account and select your payment plan. That’s the way it works for most people, but it didn’t for me -- I had to call the help line. Though I reached (I think) India, two knowledgeable, friendly women helped get me set up (two because I had a power outage in the middle of the first call). I’ve read scalding criticisms of Virgin Mobile’s customer service, but my cell-phone account is also with the company, and I’ve never had cause for complaint in that regard.

I live four miles from the nearest town but have a good home network, so I planned to use the MiFi 2200 only on my forays down into town. I took the MiFi 2200 and my iPod Touch down to the parking lot of my gym and turned on the Virgin; it took the Touch about 30 seconds to recognize it, and I was ready to surf. I first got some e-mails, and that was a snap. The 2200 wasn’t as fast as my home network, but there I have the fastest service Comcast offers; probably anything else would seem slower.

I next tried music. Pandora and WunderRadio each took about a minute to load, but once a connection was established, each streamed without interruption. I was even able to stream a move from Netflix, which really surprised me. It took nearly two minutes to get started, but once it did, everything was fine. The MiFi 2200 had good range; I was able to connect from 25’ to 30’ away, tuck it in my pocket, and forget it -- it worked just fine. Turning it off was a little tricky; you have to hold down the button until the 2200 powers down, about a second or two.

A few days later, I met a friend for lunch at the other end of town. I took the MiFi 2200 and Touch along to show them off, but could scarcely make a connection at all; I was able to retrieve e-mail only at the speed of a dial-up connection. After lunch I went to the other end of town, where all was well again. The 2200 uses the Sprint network, and it soon became evident that the quality of the Virgin’s performance would entirely depend on the strength of Sprint’s signal. After a little more experimenting, I concluded the following: In an area where my Virgin Mobile phone got five bars, all was well; four bars, and the MiFi 2200 got a little cranky with music and would no longer stream video; with three bars, music had dropouts, e-mails were slow, and video was still impossible. One or two bars? Forget it.

Most people will use the MiFi 2200 away from home, so it’s important to know the signal strengths of the regions you’re planning to travel through and to. Fortunately, Virgin Mobile provides what appears to be a very accurate map that lets you know what kind of service to expect. This will be a crucial point in deciding whether or not to buy a 2200. My feeling is that a Mobile Hotspot will be a good bet for those who travel where there are good signals, want to have their favorite music programming at hand, and don’t want to pay high fees. I can also see it as a boon for vacationers. Say you want to spend a week at the beach; there’s no Wi-Fi there, but there’s a good cell-tower signal. You can pay $10 for 10 days ($20 if you’re glued to the Internet), and listen and surf away. The MiFi 2200 could also be used as a backup in case a home system goes down for some reason.

Virgin Mobile’s MiFi 2200 Mobile Hotspot has a lot of things going for it. It’s small, easy to set up, has convenient pay-as-you-go service, and gives the user a Wi-Fi connection anywhere there’s a Sprint tower nearby. That covers a lot of territory, though not absolutely everywhere. The MiFi 2200’s greatest limitation is that it needs a strong signal to operate properly.

If you’re interested in getting one, you’ll need to check out the area where you plan to use it to ensure that you’ll have a strong enough signal to make it worthwhile. If you will, you’ll find the MiFi 2200 a very capable little device that delivers more than its small size suggests.