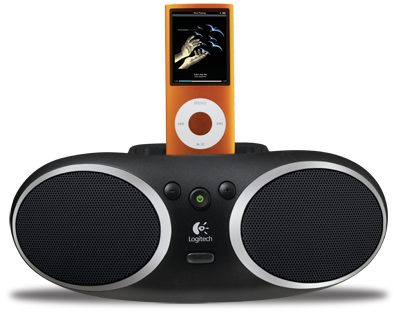 As technical advances are made in audio, it seems that everything just gets smaller. You can get 16 gigabytes of storage with the sixth-generation iPod Nano, which is about the size of a Nabisco cracker -- and almost as thin. Blu-ray Disc players have gotten smaller, certainly in the height department. The one thing that’s been difficult to miniaturize is speakers. The speakers in laptop computers and iPods might be good enough for announcements and news, but they’re totally inadequate for music.

So I was intrigued when I saw Logitech’s S135i iPod dock and speakers on sale at Walmart for $34.95 USD. (It lists for $49.99.) Normally I’d ignore anything that small and priced that low, but I’d had a very good experience some months before with Logitech’s S715i rechargeable speaker and iPod dock, and figured that if anyone could make a miniature speaker that sounded respectable, it might be Logitech.

The S135i comes in one of those advertising-heavy boxes that are almost standard these days, printed with attractive art that includes a photo of the model and lists its major selling points. Inside are the S135i, a power cord with transformer, a quick-start guide, the inevitable safety, regulatory, and warranty paper, and a sheet with Logitech’s URL that asks “What Do You Think?”

The S135i is very small: about 8”W x 3.5”H x 3.5”D. The front has a sturdy grille covering two “eyes,” behind which are the speakers. The case is made of a supersturdy plastic that doesn’t feel like plastic. The somewhat sleek design angles the speakers up a bit for a better listening axis when the dock is placed on a desk or table, and the S135i is easy to carry from place to place -- it naturally fit my hand.

Between the speakers are four controls: power, volume up and down, and bass boost. The power button has an LED that glows green when pushed on. On the rear is a small indent that contains an inlet for the power supply and a 3.5mm jack for connecting an auxiliary player. On the bottom are four sturdy rubber feet that keep the dock solidly positioned without marring furniture. Also on the bottom is the access door to the battery compartment. Unlike its big brother, the S715i, the S135i isn’t rechargeable; instead, it’s powered by four AA alkaline batteries (not included). Of course, if you’re only going to plug it into the wall -- the only way the S135i will charge an iPod -- you won’t need the batteries, but the beauty of this speaker-dock is its portability. On battery power, with an iPod docked, you have no wires to deal with, and since the S135i weighs only 0.8 pound (400gm), you can take it from room to room with the utmost of ease. Logitech claims that four batteries will give you ten hours of use; less if you use bass boost. I’ve been running the review sample with bass boost for close to eight hours with no decrease in sound quality.

Logitech says that the S135i comes ready to use with the iPod Classic 120GB, iPod Touch (first generation), or iPod 30GB (fifth generation). If your iPod isn’t one of those, Logitech suggests using the tray that came with your iPod. The problem I have with this arrangement is that the trays fit iPods, etc., without their protective cases. I think that most of us now use cases for our portable players that are very hard to remove. I couldn’t dock my iPod Touch without removing its case, so I did my listening tests with my iPod Nano (sixth generation), because it can play high-quality formats such as Apple Lossless.

The S135i feels not like a toy but a solid, if small, piece of equipment. When I listened, I heard sound that couldn’t have come from your usual cheap boom box. The S135i produced a big sound for its size -- a sound that definitely filled my 14’L x 12’W office. It didn’t sound quite as refined as the larger S715i, but for its size, the S135i’s sound was quite satisfactory for casual use. The midrange was slightly mushy when I pushed it too hard, and the highs were a little forced, but overall, the sound was clean. The bass boost did make a big difference with music that was more bass laden, but at the cost of more of those muddied mids and forced highs. The stereo effect was minimal -- it depended on the recording, and on how close I was to the S135i. But overall, what I most noticed was how loudly the S135i could play before introducing objectionable distortion.

Adám Fischer’s recording of Haydn’s Symphony No.40, played from an Apple Lossless file ripped from a CD (Nimbus N 5503/4), sounded organized and well delineated. Strings were out front, the bass line was reasonably strong, and the horns sounded quite clear. The electric guitar at the beginning of “Just Can’t Wait,” from the J. Geils Band’s Love Stinks, another Apple Lossless file (from EMI CD), had great force, and the synthesizer figurations that skitter around the melody were very clear. I had to back off the volume a bit to subdue some distortion when the full band was playing, but I could still run the S135i without strain at levels that were difficult to talk over.

The S135i isn’t the best iPod dock I’ve ever heard, but it’s one of the best with miniature speakers I’ve heard. Ease of portability and operation make it quite attractive even for its list price of $49.99, but you can usually beat that by 30%. If you do, you could call it a bargain.

If you want a small dock-and-speaker system for your iDevice that’s absolute simplicity to operate, you could do a lot worse than this fine little model.