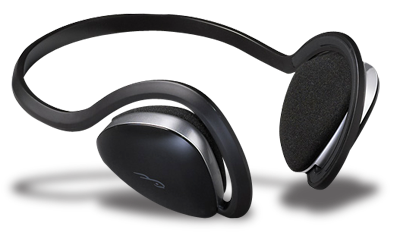 My quest for the perfect Bluetooth sports headphones continues, with this installment focusing on the Rocketfish RF-MAB2. The headphones provided many hours of solid use, but they still came up lacking in a few details.

The RF-MAB2 headphones come in a box meant to hang on display hooks in a store, with a large plastic window to show them off. Aside from the headphones, the package includes an AC power adapter, a removable USB charging cable, a user guide, and a quick setup guide. Also included but not listed was the pleasant surprise of an extra set of foam earcup cushions.

The headphone set has a one-piece plastic frame that expands when you place it on your head. The frame wraps around the back of your neck instead of over the top of your head, and it’s a design that I greatly prefer. The frame will not fold up, making the search for a case (which isn’t included) difficult but not impossible. The earcups are a rather stylish triangular shape with rounded corners. On the face of the left earcup are the play/pause button and an on/off power switch that doubles as a talk button for your phone. The other controls, which are grouped around the edge of the left cup, include rocker switches for volume and skipping tracks backward and forward. There’s also a USB port close to the skip rocker for charging the unit. On the earcup exterior is an attractive LED display in the shape of the Rocketfish logo that conveys the headphones’ status, and the delivery area on the inside of the headphones is covered with light foam.

The Rocketfish RF-MAB2 has five different built-in EQs that you can engage by tapping the power button twice when the unit is on and in use. Rocketfish calls this “3D Sound,” and the settings include Normal, with no alterations; Xomei, which reduces distracting sounds, making the phones sort of noise-canceling; Live, which Rocketfish claims represents a live performance; Wide, which provides a fake panoramic effect; and Mex, which extends the width of the image while pumping up the bass. Out of the box the headphones measure 5.5" high and 4" from cup to cup when not on the head. The earcups are 1.75" triangles that are .75" wide. The weight is a very light 1.8 ounces.

The headphones are set up to receive telephone calls while you’re listening to music, but I tested them only as a gym accessory. The Rocketfish RF-MAB2 fits my head very well, but the one-size-fits-all behind-the-neck band won’t fit everyone, nor will the smallish earcups. There’s nothing physically adjustable about these phones except for the sprung headband, so you should try them on before purchase. I found them as comfortable as any sports headphones, and I could tolerate them well for an hour and a half.

Out of all the headphones I’ve tested, these were the hardest to pair with the Sony dongle that I use with my iPod Touch and iPod Nano. With most devices, you can expect only the first pairing to take some time; subsequent pairings are usually close to instantaneous. The RF-MAB2 phones, however, were slow to pair every time, taking about 40 to 55 seconds. But pair they did -- no failures there.

Once established, the connections were firm without any dropouts. The range for Bluetooth was normal for wireless devices of this sort, about 25’ to 30’. And once I learned them, the controls were easy and efficient to use with my left hand. The volume level, as with most Bluetooth devices, was limited, but its top range was loud enough to mask out most of the gym sounds around me.

The sound is very decent, though it lacks highs and leaves more clarity to be desired. The different “3D” settings were fun to play with, but they seldom lived up to what the manual described. The best one for me, and the one most like its description, was Mex, which pumped up the bass while making the mid and upper frequencies a bit more transparent.

The noise floor is low, and when there’s no music playing the phones are almost silent. As with most sports headphones I’ve reviewed so far, the sound is OK for the gym and other activities, but I wouldn’t want to use them for serious listening.

Since the headphones fit my head relatively well, they never came dislodged or worked out of position no matter how strenuous the exercise. I don’t perspire much when working out, but those who do might find that the extra set of headphone cushions provided is really a necessary accessory.

You’ll have a hard time finding a lightweight set of Bluetooth headphones that will work at the gym or during other vigorous activities and still provide decent sound. The RF-MAB2s have a lot going for them, including their light weight and Bluetooth stability. They’re a little cranky about pairing (at least with my Sony dongle), and their sound isn’t far above FM broadcast quality. But given their low cost, you’ll likely find them quite enjoyable despite their few drawbacks. I’m using them for now, but I’m still on the search for something better.