Note: for the full suite of measurements for the Arcam SA30 from the SoundStage! Audio-Electronics Lab, click this link.

In 1997, pianist Brad Mehldau, then 26, released The Art of the Trio, Volume One, his second album for Warner Bros. Records. That was followed by four additional volumes, the latest in 2001. The aggressively declarative title was conceived by producer Matt Pierson, who was also the head of A&R for jazz at the label. The idea was clearly to establish Mehldau as the heir to the postwar jazz trio tradition that had been established by artists like Oscar Peterson, Bill Evans, and Keith Jarrett. Each of these pianists recruited band members who could improvise at a high level and be counted on to play outside the standard role of a rhythm section.

But, while the notion of the contemporary trio was a meeting of equals, the eponymous naming convention made it clear these units were closer to benevolent dictatorships than democracies. With few exceptions, the nominal leader picked the material and directed the flow of the performances. 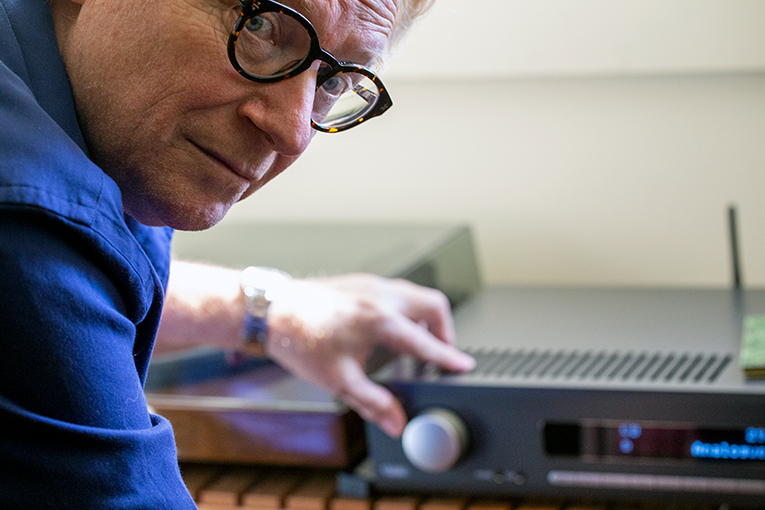 Today, if you were to examine the jazz trio’s state of the art, you’d find a very different model; one best exemplified by New York City–based Borderlands Trio—bassist Stephan Crump, pianist Kris Davis, and drummer Eric McPherson—and Chicago’s Artifacts Trio—flutist Nicole Mitchell, cellist Tomeka Reid, and drummer Mike Reed. All six of these musicians maintain active solo careers, in addition to working with other musicians, and two—Davis and Mitchell—have become high-profile stars in the jazz community.

The most obvious difference from Mehldau’s state of the art in the late 1990s is the gender diversity of these two groups, but listening to their recent recordings—Borderlands Trio’s Wandersphere (CD, Intakt Records 370) and Artifacts Trio’s . . . And then there’s this (CD, Astral Spirits Records 139)—demonstrates that these are truly collective units. There’s no obvious leader, no set pattern to the performances.

For their second album, Borderlands decided to rely completely on the imaginations and reactions of its members, recording four collaborative improvisations that range between 20 and 41 minutes. Throughout these four pieces, the trio delivers a showcase for active listening, as the musicians develop interlocking cells where the three instruments assume various approaches. On her part, Davis constantly shows her marvelous ability to set up a percussive or melodic pattern and then deconstruct it. Her ostinatos are enormously compelling, and frequently lock into a chant-like pattern with either Crump or McPherson. 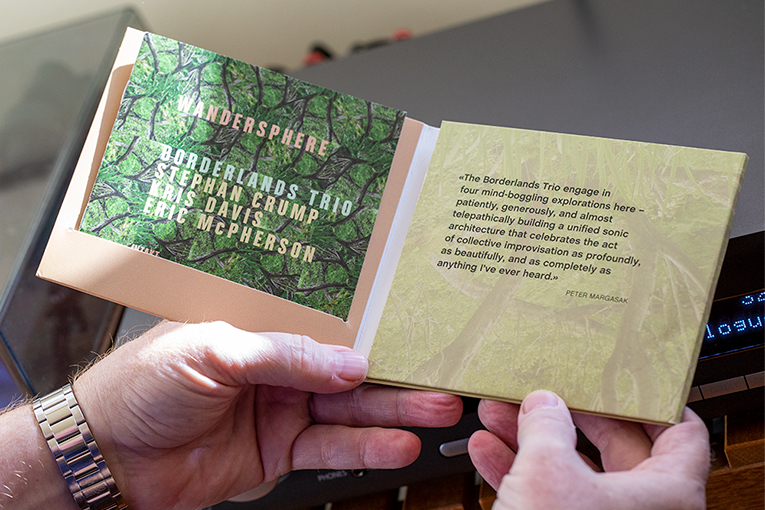 Despite having just three members, Borderlands offers an exceptionally wide array of textures, including Crump’s slippery arco playing, which highlights the friction between bow and string, and Davis’s ability to bring out the shimmering quality of manually manipulated piano strings. McPherson had a remarkable childhood, surrounded by master musicians like bassist Richard Davis and drummer Elvin Jones. He constantly displays the focus on sonic craft taught to him by yet another master, Michael Carvin, a notably tough taskmaster for many budding percussionists.

This is long-form, collective improvisation at its very best; primarily languid and contemplative, but occasionally explosive, and always with a strong percussive edge.

On its second recording, Artifacts takes a very different approach, performing nine pieces that rely predominantly on funky rhythms—reflecting the band’s interest in the music of artists from the early years of the Association for the Advancement of Creative Musicians (AACM). Like the AACM’s best-known band, the Art Ensemble of Chicago, the trio doesn’t consider adventurous improvisation and dance rhythms to be mutually exclusive, and this is reflected in their compositions; Mitchell’s “Blessed” blends a powerfully propulsive cello line with her ethereal flute, while Reid’s “In Response To” is constructed on a finger-popping foundational rhythm that Reed highlights with his ebullient cymbal work. 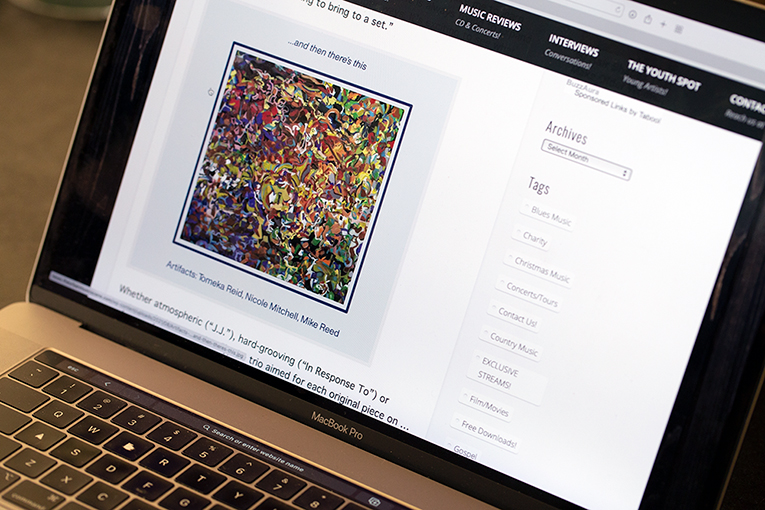 For their interpretation of “No Side Effects,” composed by the AACM’s Roscoe Mitchell, Artifacts call up a reggae-flavored cello and drum line. A version of “Soprano Song,” written by AACM cofounder Muhal Richard Abrams, synthesizes all of the band’s signatures, building from Reed’s loping cymbal pattern through virtuosic interplay between Mitchell and Reid, and ending with each musician finding their own way to the sudden conclusion.

Distinctively different in sound and approach, these two sophomore recordings combine to provide a highly effective illustration of the current state of the jazz trio.

In keeping with the state-of-the-art theme, swapping Arcam’s SA30 amp into my regular system seemed like a natural. Billed as an “intelligent integrated amplifier,” the SA30 ($3300, all prices in USD) is a Swiss Army knife of a component in terms of input options and other features. It has five analog inputs, including a switchable moving-magnet/moving-coil phono input, four digital inputs, and one HDMI eARC input. Its rear panel is equipped with two Wi-Fi antennas and an Ethernet port that enable the SA30 to receive Google Cast, Apple AirPlay 2, and uPnP streams, and it includes a full MQA decoder and a 32-bit Sabre ESS9038K2M DAC. Unsurprisingly for the company that was the first to use the technology in 2009, the SA30 has class-G amplification, which is rated at 130Wpc into 8 ohms. 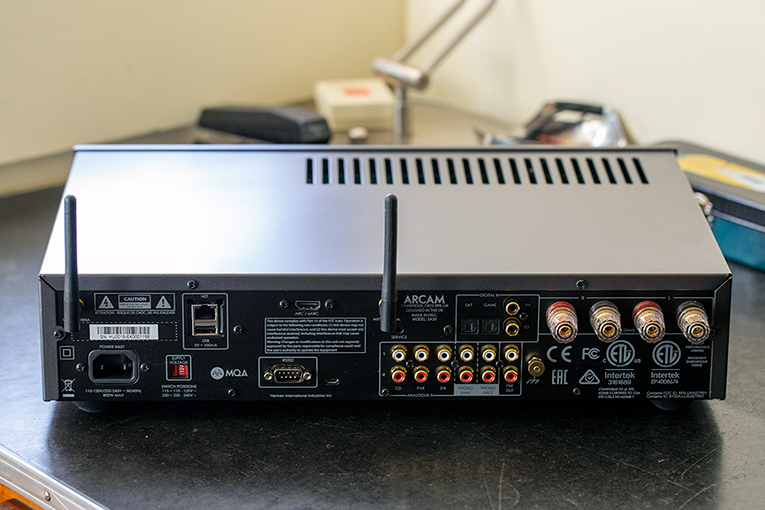 Most intriguing is the amp’s inclusion of Dirac Live room-correction software, which analyzes and digitally reduces the impact of room effects on speaker performance. According to the manufacturer, Dirac Live’s algorithms deliver a larger sweet spot, accurate staging, clarity, voice intelligibility, and a deeper, tighter bass. Arcam provides a calibration microphone, which you can connect via USB to either a PC or Mac to tune the EQ curve to suit your room’s characteristics and your listening position. Separate Dirac Live EQ curves can be set for different input sources, so you can establish distinct settings for, say, music emanating from your CD player and for video material viewed on your TV.

Connected via AudioQuest Type 5 cables to my benchmark Q Acoustics 3050i floorstanding speakers, the SA30 rendered the soundstages of both trio recordings with exceptional clarity, and captured all the details presented by the musicians. 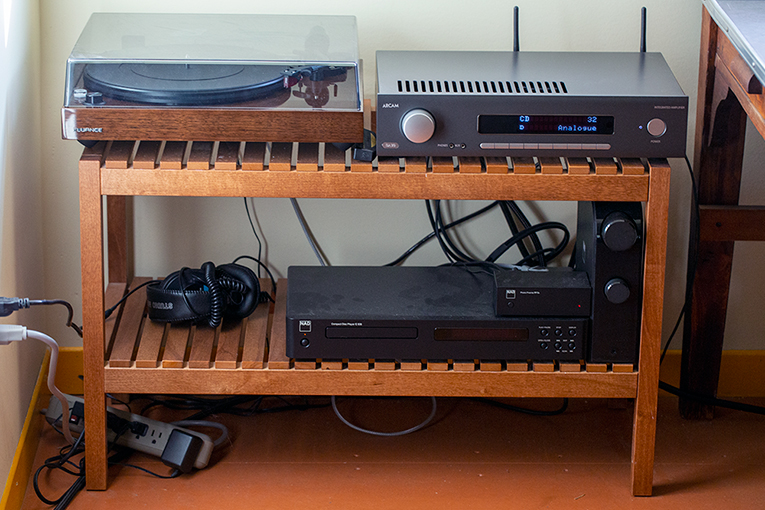 I began by streaming the 24-bit/44.1kHz Artifacts Trio WAV files via AirPlay 2. Connecting the SA30 to the stream for the first time was a bit clunky and nonintuitive. I had to press the Menu button on the front panel—one of nine selectors there—a couple of times to reach Network Settings, at which point the screen readout offered other choices that were no more intuitive. To make it more frustrating, the gray-on-silver lettering of the selectors is difficult to read unless you’re facing them head-on.

When I located the amp from my computer’s AirPlay 2 dashboard and made the connection, the computer’s IP address appeared on the Arcam’s screen; a nerdy touch, if ever there was one. The white dot-matrix characters on the display screen added to the utilitarian feel.

Selecting other inputs and information—including software build versions and the amp’s serial number, another nerd-hole of detail—was no less of a mystery tour. I recommend keeping the manual close at hand until you’re familiar with everything; there’s a lot to take in. 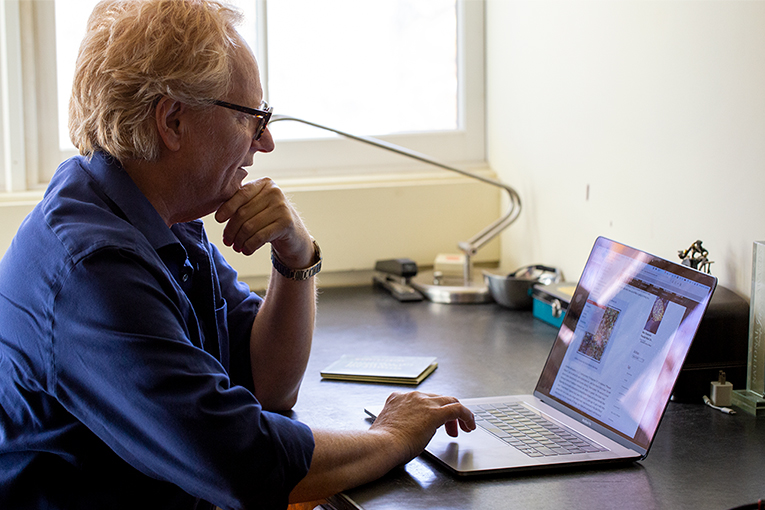 Back to the music: if there was any degradation of clarity and detail because of the Wi-Fi connection, it wasn’t noticeable to my ears. Without the Dirac Live function engaged, and with the large, silver volume selector set to 40 (loud enough for my wife to inquire about the music from two floors below my office), the soundstage seemed broad and exceptionally deep. Cranking it higher, using the SA30’s large remote, the relative balance between Mitchell’s breathy flute and Reed’s kick drum remained true, and none of the nuances of Reed’s cymbals or Reid’s expressive cello-playing were lost.

Switching to the CD input on the SA30, I cued up my physical copy of Wandersphere on my NAD C 538 CD player. Recorded at David Stoller’s Samurai Hotel recording facility in Astoria, New York City, mixed by Crump, and mastered by guitarist Liberty Ellman, the CD has a soundstage that sounded even broader than that of . . . And then there’s this, although the depth seemed a bit shallower. Throughout the volume range, the Arcam performed with exceptional clarity, losing none of the rich detail, even at the lowest late-night level. 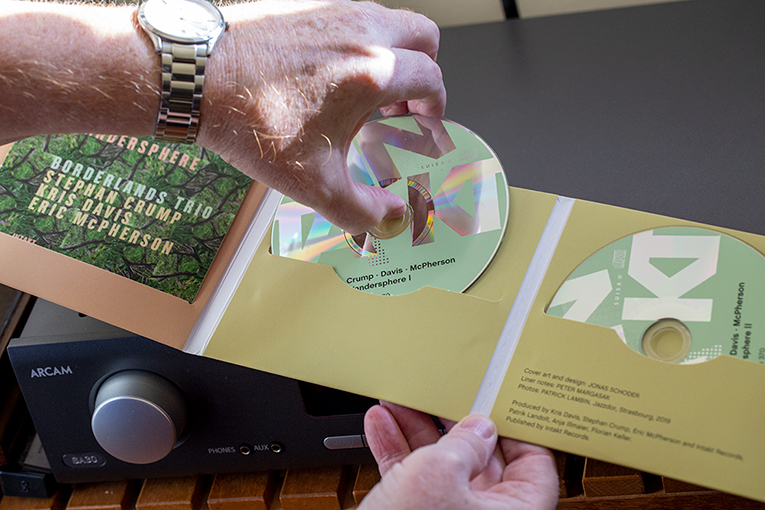 Next, it was back to the manual for what I assumed would be a somewhat challenging procedure to set up Dirac Live.

The first step is to download the Dirac Live software from the company’s site. Next, you must plug the supplied calibration microphone into your computer via the USB-C port. After selecting that microphone in the application’s dashboard, you must choose what type of seating arrangement most closely represents your listening area. The tightly focused imaging selection, which you’d choose if your normal listening position is a single chair, offers nine measurement positions. Focused imaging—a small couch—offers 13 positions, and wide imaging—if more than one person is listening, on a larger couch—offers 17.

According to Dirac Live, it’s important to limit extraneous noise, so using a microphone stand is recommended to reduce microphone handling. Not having one, I improvised with a music stand, but you could also use a camera tripod if you have one.

While the illustrations on the app are instructive, the tests play out in real time, so you may need to walk through it first to ensure you know what will be required. You can abort or erase a measurement, if you need to adjust the volume or the mike’s position.

The mapping process took me about 30 minutes, and at the conclusion I was prompted to export my settings to the SA30. With that done, I was ready for what my father always liked to call the “acid test.”

First, some details about my room: I work in the attic of a 130-year-old wood-frame house. The ceiling is about 7.5′ high and I sit approximately the same distance from my speakers, which are about 7′ apart. The walls are drywalled, and there’s an area rug that covers most of the wood-plank floor. To take the measure of the Dirac Live filter I’d added, I cued up “An Invitation to Disappear” on the Borderlands CD. Beginning with a bass passage that features Crump pulling some exceptionally low notes from his instrument, accompanied by some high-pitched cymbal work from McPherson, the piece is the most sonically varied on the recording.

Back in my standard listening position, it seemed like Crump’s bass gained some presence, positioned just a bit more prominently to the left of the soundstage, but I wouldn’t say the difference was huge. Then again, my room is not particularly sonically challenging. At a more moderate volume level, my A/B test—with and without the filter added—provided more noticeable results.

It should be noted that the SA30 also offers a traditional balance control, and the Dirac Live software allows additional tweaking.

Is “intelligent” room correction the future? Certainly, it’s cool technology—that nerd factor again—and if you have some hard surfaces and odd corners in your space, it could well increase your listening enjoyment. 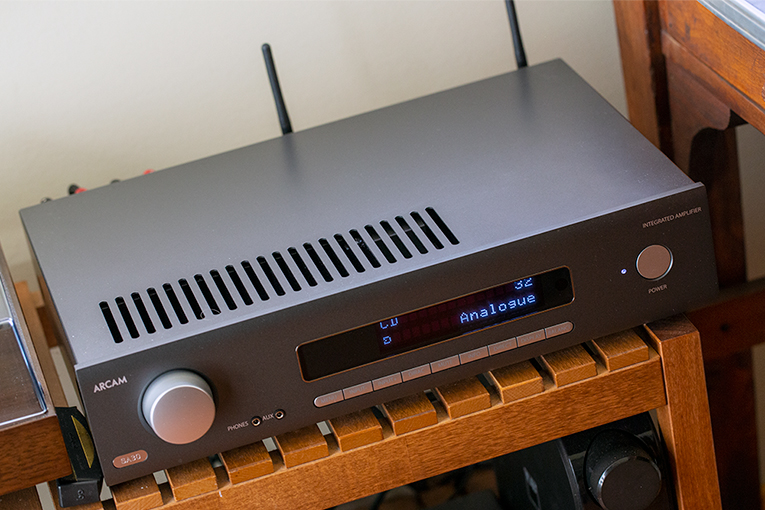 What’s more obvious is that gender-balanced, open-minded improvisational units are setting the standard for contemporary jazz. These recordings are two of the best, most representative releases for 2021 so far, offering hours of deep listening.

Note: for the full suite of measurements for the Arcam SA30 from the SoundStage! Audio-Electronics Lab, click this link.