A few years ago, loudspeaker manufacturer Axiom Audio began making electronics. Their first model was the A1400 class-D power amplifier, in two versions: the eight-channel A1400-8 ($3850 USD) and the two-channel A1400-2 ($2620). Although those amps, both since discontinued, offered a lot of performance for the money, they were a little on the expensive side for A/V enthusiasts on a budget. They also didn’t seem to be budgetary matches for Axiom’s speakers -- their most expensive speaker at the time, the M80, sold for about $1300/pair.

Axiom’s new line of amplifiers, the ADA models, have been designed from the ground up by the company’s new chief designer, Andrew Welker. While there were only two A1400 amps, there are 21 ADA models. The new line is actually based on three “power supply platforms” -- the ADA-1500, ADA-1250, and ADA-1000 -- which deliver different levels of power and can be configured with from two to eight channels. While the ADA-1500 amps are priced similarly to the A1400s, the ADA-1000s start at only $980 for the two-channel version, and $1340 for the five-channel version provided for this review.

That’s what ADA stands for. The ADA-1000’s class-D output stage, designed by Axiom, is mated to a high-current linear power supply that, they feel, provides better performance than the switching supplies often used in class-D designs. To that end, the ADA-1000 has a large toroidal transformer and 54,000µF of capacitance. The five-channel version is claimed to deliver 125Wpc, all five channels driven into 8-ohm loads; or 200Wpc, all channels driven into 4-ohm loads. Considering the amp’s reasonable price, that’s a lot of power.

The modular design of the ADA series no doubt contributes to the amps’ reasonable prices. The same case is used for all models; it measures 17.75”W x 5.25”H x 16.75”D, with a 10mm-thick aluminum faceplate and heavy-gauge steel for the rest of the case. It can accommodate any of the three supply platforms, and any number of amplifier modules, up to eight. The case is very solid, and designed more for functionality than appearance; the top panel is secured with multiple exposed bolts, and seams are visible all around. The ADA-1000 may be a plain black box, but considering its claimed performance specifications, sturdy build quality, and substantial weight of 58 pounds, its price is surprisingly low. On the rear panel are single-ended inputs on RCA jacks, but no XLR jacks (the ADA-1250 and ADA-1500 both have XLRs); a removable IEC power cord; a 12V trigger; and a mains power switch. The only things on the front panel are the power switch and power indicator light.

The ADA-1000 was designed and is manufactured in Canada. As with their speakers, Axiom sells their amplifiers only directly to the consumer, via the Internet, but offers a 30-day, money-back guarantee (the purchaser pays only the return freight). All Axiom products are backed by a five-year warranty.

I used the ADA-1000 with my reference Anthem Statement D2 A/V processor as well as Oppo Digital’s new BDP-105 universal Blu-ray player, the latter used as both a multichannel audio source and as a preamplifier, taking advantage of the high-quality analog output stage and digital volume control built into the Oppo’s ESS Technologies Sabre DAC. Other sources included an Acer Aspire One 770 netbook computer running Windows 7 and foobar2000. The speakers were KEF’s R900 (L/R) and R600c (center), Definitive Technology’s BP-8080ST (surrounds), and a Paradigm Reference Servo-15 v.2 (subwoofer). I used various cables from Analysis Plus, AudioQuest, and DH Labs, and power-conditioning products from Blue Circle Audio, Essential Sound Products, and ZeroSurge.

My previous experiences with Axiom products meant that I wasn’t surprised to discover that the Axiom ADA-1000 had a clean, dynamic sound. Their A1400 amps had impressed me with their pure, effortless sound, and Axiom’s consistently excellent speakers were most recently written about on SoundStage! Xperience by Kevin East, who lauded them for their transparency. In addition, I’ve always been impressed by the performance of the many speakers that Andrew Welker designed during his time at Audio Products International, mostly under the Mirage brand, as well as the ones he’s designed for Axiom.

The ADA-1000 reminded me of all those excellent products, having an honest yet pleasing sound, and enough power to provide a compelling home-theater experience at realistic volume levels. I watched the entertaining Wreck-It Ralph -- the simple sounds of vintage video games were astonishingly authentic, and brought back a flood of memories of the countless hours of my youth that I wasted in arcades. The vast aural landscapes inside the worlds of video games were reproduced with an expansively holographic effect that was totally immersive. A fun pop-music soundtrack and inventively deployed video-game sound effects would occasionally and effectively surface in the mix. The frenetic pace of the race scene was replayed with ease, and the ADA-1000 was able to drive the KEF and Definitive speakers very effectively. While the 1200W Paradigm sub filled the room with various explosions and deep rumblings, the Axiom drove the rest of the speakers to high levels, and easily matched the sub’s prodigious output.

The sound design of Sucker Punch is spectacular from start to finish, though I found the movie lacking in the edginess I expected based on its cool, graphic-novel-like appearance. The music in the opening scene was exceedingly clean through the ADA-1000. Actress Emily Brown’s cover of the Eurythmics’ “Sweet Dreams” was subtle and haunting, and not lost in the swirling mix of the orchestral score and the sounds of a thunderstorm. Even though multiple channels were simultaneously reproducing high volume levels, the Axiom provided good transparency with a lack of distortion, and the voices had an ease and refinement reminiscent of a good two-channel system. Later, a surreal vision of feudal Japan came to life in a fight scene with gigantic samurai warriors, creating a fantastic auditory experience. The relentless sound of gunfire from a Minigun was explosive but not harsh, and well balanced with the equally loud rock that’s such an integral part of this film’s excellent soundtrack.

The KEF R900 speakers that I primarily used for this review are especially revealing, with a midrange purity that I haven’t heard bettered by many speakers at any price -- and the KEFs still sounded very neutral and transparent with the budget-priced ADA-1000. Holly Cole’s first studio recording in five years, Night (16-bit/44.1kHz FLAC, Universal), might not be as iconic a jazz-vocal album as, say, her Don’t Smoke in Bed, but it contains some gems. Through the Axiom, Cole’s raspy, earthy voice in Gordon Lightfoot’s “If You Could Read My Mind” hung deliciously between the speakers in an intimate sound that I could have listened to all night, every night. Her moody original composition “You’ve Got a Secret” opens with some great articulation of the double bass, which is notoriously difficult to reproduce: The ADA-1000 did an excellent job of reproducing the gently varying notes played by Cole’s longtime bassist, David Piltch. It also delicately articulated the distinct rattle of the snare drum, then a lively horn solo, for a thoroughly enjoyable performance. 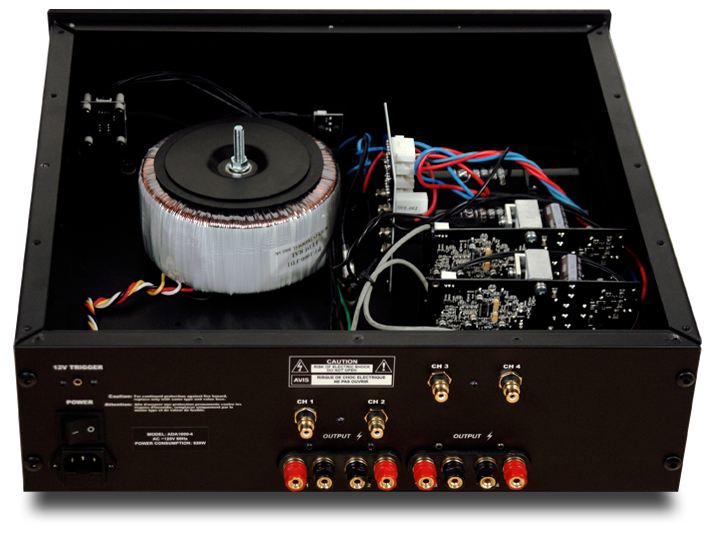 When I compared the ADA-1000 to Bel Canto Design’s e.One REF1000 monoblocks ($3990/pair when available), the Bel Cantos were able to create a larger sense of space, with better placement of instruments and voices from side to side and from front to back. The Bel Cantos also produced more precise image outlines, but still, the Axiom fared quite well in this comparison to a much more expensive amp, even when playing music recordings. The ADA-1000’s neutrality highlighted the bare acoustic recording of Foreigner’s Acoustique: The Classics Unplugged (16/44.1 FLAC, Sony), including marvelously fast attacks on the forcefully strummed acoustic guitars. The voices on this recording were, again, placed squarely between the speakers, with a stripped-down sound that was extremely lucid through the Axiom amp.

The ADA-1000 also had some kick. Although it’s claimed to output only a relatively modest 125Wpc into 8 ohms, Axiom also states that it will deliver 200Wpc into 4-ohm loads, all channels driven. Driving a single pair of stereo speakers was a breeze for this amp. The R900 is the largest model in KEF’s tremendous R series, but its bass is more tight and articulate than remarkably deep. Even so, the ADA-1000 was able to wring every last bit of bass from the R900s with Daft Punk’s “Solar Sailer,” from the Tron: Legacy soundtrack (16/44.1 FLAC, Walt Disney). When I cranked up the volume, each pulse of the pounding electronic bass was separated from those before and after it, creating wave upon wave of room-filling bass that was nonetheless differentiated from the orchestral score in distinct layers of sound.

There were times when I did wish for a bit more power from the ADA-1000 -- Michael Jackson’s Bad (24/48 FLAC, HDtracks) was a little more composed through the Bel Canto REF1000s. The Axiom was still quite powerful, casting a wide soundstage, with ample and weighty bass, and a nicely reproduced hi-hat placed just to the left of Jackson’s voice -- but when the singer launched into the powerful, angry title track, his voice got a bit congested. The drums and electric guitar were also smeared slightly compared to the Bel Cantos, which were able to play louder with greater poise.

Although the Bel Canto amps were the better performers, I’d be remiss if I didn’t stress that the pair of e.One REF1000s cost three times as much as the Axiom. Not only that, the Axiom has five channels of amplification to the Bel Cantos’ two. If you want more power, Axiom does make two more powerful amplifiers. Nonetheless, I had a blast listening to the ADA-1000 with both movies and music, and often found myself marveling at how good it sounded when reproducing a familiar song or soundtrack. At only $1340 for the five-channel version, I wouldn’t hesitate to use the ADA-1000 with an entry-level surround-sound processor, or to upgrade the sound of a multichannel receiver, or even use the two-channel version in a very-high-quality, reasonably priced, audio-only system.

People often ask me if I think class-D amplifiers are the way of the future. I think every technology has its advantages and disadvantages, and that much depends on how well a technology has been implemented in a specific product. Class-D power amplifiers are now a relatively mature technology; no one should be surprised when a manufacturer introduces a high-performance class-D amp at a reasonable price.

That’s what Axiom has done with the ADA-1000. It’s a great-sounding amplifier. I was impressed by the sound quality of this budget-friendly amp, and was more than happy to have it in my reference multichannel system for an extended period. At only $1340 for the five-channel version, few products compete with it at anywhere near its price, and it’s backed by the expertise of Axiom Audio, which has been in the audio industry for over 30 years. If you’re looking for an amplifier to add some power and refinement to a budget-minded system at an almost unbelievably low price, look no further.