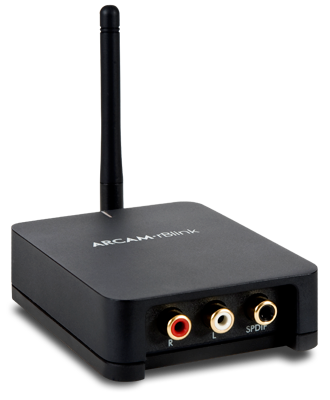 Usually, when signing up to evaluate audio products, reviewers know what to expect in terms of how to integrate a new component into an audio system. A pair of speakers? You set them up and listen. A power amp? Pretty straightforward stuff.

Then along comes a product like Arcam’s rBlink ($250 USD). I’d read all the information about it that Arcam had sent me before I received the review sample, so I had a general idea of what it was. What I didn’t know was how I would interact with it from day to day, and how it would change some of my listening habits.

The rBlink is actually two components. First, it’s a wireless device that connects to compatible partners via Bluetooth. For technology-deprived souls, Bluetooth is a wireless protocol developed in 1994 by Ericsson, the Swedish telecommunications giant, that permits the exchange of data between equipped devices, fixed and mobile, over short distances. The rBlink allows products such as smartphones and computers to connect to it using BlueCore, the latest Bluetooth-embedded technology from CSR. The result, without getting too technical, is that the rBlink uses the very latest hi-fi-friendly tech for better connection between audio devices, the improvement due, in part, to lower noise.

What this means for audiophiles is that you can send a digital signal wirelessly to the rBlink from iPhones, Macs, Androids, etc. This lets you stream music not only from computer-based systems, but also from streaming services such as Pandora and Slacker. Got a favorite Internet Radio station you listen to over your phone? Now you can stream it from phone to rBlink and listen to it through your stereo system. If you think of Bluetooth as the carrier, you also should know that the transmitted files are compressed using algorithms such as aptX (if the sending device supports it). Wikipedia describes aptX as a “digital audio data reduction technology,” which is what allows large bits of information to be sent reliably from one small device to another. The aptX compression algorithm allows for transmission of data at a rate of up to 380kbps, though this implementation is not lossless. SBC and AAC are supported as well.

The rBlink, now receiving music in digital form from your wireless device, can do two things with it. One, it can convert the signal to analog and, using a set of RCA outputs (2.15V RMS), send a conventional analog signal to your preamplifier or integrated amplifier. This means that the rBlink, once it receives the signal wirelessly, acts as a conventional DAC. The rBlink uses a Burr-Brown PCM5102 DAC chip that’s said to offer a signal/noise ratio of 112dB. This chip is coupled with what Arcam claims is jitter-reducing and reclocking circuitry that generates less than 100 picoseconds of jitter. When you factor in the linear power supply (as opposed to the switch-mode supplies so common nowadays), you can see that the rBlink seems closer in overall design to your basic high-end DAC than the typical wireless appliance. 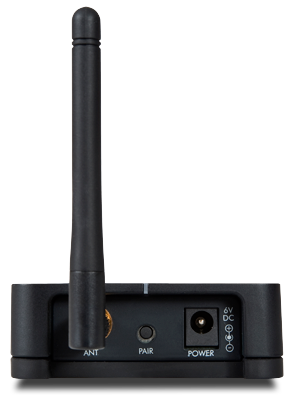 The second, and perhaps more important, function of the rBlink is as a wireless digital converter. Remember a few years ago, when just about everyone was offering a wired USB-to-S/PDIF digital converter so that you could convert the output from your computer to a signal that your legacy DAC could use? Well, think of the rBlink in a similar vein, except this time the digital output can come from your laptop or phone or tablet, and not via USB, but wirelessly using Bluetooth. The rBlink then outputs a digital signal via an RCA-based S/PDIF connection to your DAC of choice. You could place the small rBlink on top of your DAC, run a short digital cable, and voilà: your DAC now has what amounts to wireless capability.

There are a few other things you should know about the rBlink. First, Arcam has lots of r-series models. Without describing each one -- they seem to release these mini-components monthly -- suffice it to say that whether it’s wireless audio, digital conversion, or headphones, Arcam has an r model for it. Nor are they cheaply made. The rBlink measures only 3” x 4” x 1” (75 x 100 x 26mm). Its cast-aluminum case is very solid, with a real high-end feel. On one end are the power receptacle for connection to the wall-wart power supply, a Pair button that you push to get the rBlink ready to communicate with your device, and an antenna. On the other end are the stereo analog outputs and S/PDIF digital output (all RCA jacks). On top is a slot-shaped LED that glows red when the rBlink isn’t in use, violet when it’s pairing, and blue when it’s paired and ready to play music. On the case’s bottom is a nice touch: a rubberized surface that lets you place the rBlink atop another component, such as your DAC, without marring the finish of either.

To use the rBlink, enable Bluetooth on your device, press the rBlink’s Pair button, confirm the pairing on your wireless device (click “OK” or some such). You’re ready to play music. I used the rBlink as both a DAC and a wireless converter (in the latter configuration, connected to my Calyx Femto DAC). My wireless devices were a MacBook, a MacBook Air, and an iPhone 5. The rBlink was able to accept and pass digital signals at resolutions as high as 16-bit/44.1kHz, confirmed at the output using the Amarra music-player software and with the front-panel display of the Calyx Femto DAC.

When a technology is at its worst, you dread having to use it. I remember about 12 years ago, when I was reviewing a new flagship home-theater receiver that had every bell and whistle then imaginable. Although its capabilities were impressive, to say the least, the user interface made actual use of the thing almost impossible. About two hours into the setup, I was at my wits’ end, wondering why I’d even agreed to review it.

I could easily see the same sort of thing happening with a product like the Arcam rBlink. It’s supposed to make connectivity with my computers and phone seamless, painlessly pairing with those devices to provide dropout-free playback. Yeah, right.

But that’s precisely what happened. I began by pairing the rBlink with my several-years-old MacBook, which doesn’t support aptX, so I wasn’t getting all the sound quality potentially on offer from the rBlink. I first used the rBlink as a digital converter, having it feed the Calyx Femto with its S/PDIF output. I listened to a combination of music from my collection -- all CDs ripped to a hard drive -- and Internet Radio stations such as Pandora.

With the computer no longer tethered to the Calyx via a USB cable, I could sit at my seat with the laptop and control everything from there. I experienced dropouts only when I inadvertently chose a recording at greater-than-CD resolution. Otherwise, the sound was always clean and clear, the sound largely reflecting the quality of the source recording. For instance, when I listened to the title track of Alicia Keys’s Girl on Fire (16-bit/44.1kHz AIFF, RCA), I heard excellent detail as Keys projected her voice out into the soundstage. The overall fidelity was largely there, but a bit of fullness and air was missing when I directly compared the rBlink’s sound with that of the wired USB connection. When I listened to the MP3 version instead of the 16/44.1, I could hear that the music wasn’t quite as warm and clear -- meaning that the rBlink did let me clearly hear the differences between the 16/44.1 and MP3 files.

The real fun began when I used my iPhone 5 to stream music to the rBlink. I have to give a shout-out to Apple for the ease and speed with which I could transfer music from my MacBook Air to the iPhone. They really have the user-interface thing down pat. Pairing the rBlink with the iPhone could not have been easier. When I entered Settings on the iPhone and touched Bluetooth, the phone quickly discovered the rBlink and the pairing was almost instantaneous. I played “Girl on Fire,” and it was clean and clear once again. To say it was listenable, even for someone used to really high-end sound, would be an understatement. It was enjoyable. I could easily imagine friends with music-laden iPhones sharing songs in a social setting. What a great way to hear what your friends are listening to.

The rBlink’s DAC section was also completely listenable, with a clean, clear sound that wasn’t short on focus or smoothness. While it did lack the nuance and extended frequency extremes of more expensive DACs, what Arcam has managed to do in such an inexpensive product is remarkable. The rBlink’s sound won’t be a game changer for most of you who have a good entry-level high-end system, but compared with what your computer could generate with its own soundcard, it would be a huge step up.

Considerations and other uses

The rBlink has made me want to set up, for the first time, a desktop system. Right now, I’m working at the bar in our kitchen because I like to be central to the goings-on in my house. When you have two kidlets, eight and six years old, the kitchen is the hub of the household. Now I just have to convince my wife that a small set of bar-top speakers won’t be intrusive. The rBlink, for its part, will certainly not be intrusive. The facts that it’s so small and doesn’t have to be linked with a wire to my computer make all the difference.

Without a doubt, the most fun I had with the rBlink was watching YouTube videos on my latest-generation MacBook Air and listening wirelessly to the sound of the videos over my stereo system. Yes, I listened to all kinds of cheesiness, such as The Script’s “Hall of Fame,” but so what? It was fun! The point is, there’s a whole world of music-related content out there that would never find its way into my audio system but will now get the royal treatment simply because it’s so easy to do. As I listen to Lifehouse’s “Between the Raindrops,” I’m pondering the possibilities that the rBlink has brought to my table -- or bar. I’m sure there’s some I haven’t yet thought of, but I’m looking forward to discovering them.

I don’t think it’s an overstatement to call the Arcam rBlink a transformational product. This has nothing to do with the rBlink’s really good sound quality as both a DAC and a digital converter, and everything to do with the doors it opens to listening to music in new ways. I can easily see myself searching for new music while standing in line at a store checkout, knowing that when I get home I can quickly pair my phone with the rBlink and instantly hear my new find over my stereo system. If I then want to buy a higher-resolution version of that recording, then all the better. While the rBlink would never replace a high-end DAC in my system, I could easily see it as an addition -- a new component genre, in a sense.

The Arcam rBlink is a great little product that doesn’t ask much of its owner. It’s more about expanding your musical enjoyment than causing hassle. I wish that could be said of all high-end audio. The rBlink represents a wave of products that’s coming; now that I’ve experienced it, I look forward to more musical possibilities.