Everyone who pays regular attention to the world of audio and video equipment knows the name Oppo Digital, Inc. Here at SoundStage!, we’ve been fans since 2006, when Roger Kanno and I reviewed their first two DVD players, the DV-970HD ($149 USD) and the OPDV971H ($199). Both players became instant Reviewers’ Choice winners. Since then, Oppo has released a string of impressive silver-disc players that have resided at or near the top of critics’ lists of recommendations.

When Oppo began -- in 2004, in Menlo Park, California -- they were considered something of a budget line, but their aspirations have always been high end -- and, in line with the best of the high end, they’ve always treated customers with respect and courtesy. Unlike many of their competitors, Oppo actually pays attention to what their customers are asking for. Their forums are lively and opinionated, and the company’s engineers are always hanging around, attentive to good ideas and active in their search for potential problems. Oppo’s network-attached devices receive regular updates from the mother ship, not because they were released with bugs but because Oppo is incessantly searching to improve them. The proof of their success was when we began to see high-end companies rebadging Oppo hardware. In a couple of cases, those rebadged Oppos carried breathtaking price increases, despite lacking any dramatic improvements.

Today, Oppo is a high-end powerhouse. Their prices have risen over time, yet each update feels like something real, not just a marketing-driven cosmetic change looking for another way into our wallets. In most consumer electronics, the budget players are in a slog, fighting for market share in the high-volume, low-profit arena usually lorded over by Japanese megacompanies. Instead, Oppo’s high-quality, medium-priced models became category killers, knocking off disc players created for the carriage trade. Customers rightly asked why they should pay so much more for a player from some high-end company when Oppo was putting out state-of-the-art gear for little more than models from Panasonic or Sony.

When the market began shifting to streaming media, Oppo tried to market its BDP-103 and BDP-105 universal Blu-ray players as central audio controllers. Their idea was to route all streaming media through their player, where it would be coddled by Oppo’s carefully selected, well-designed hardware and software. Oppo can be forgiven for making a predictive error or two in 2011 and 2012, when the BDP-103 and ’105 were being designed. They placed big bets on Netflix and Walmart’s Vudu, giving each its own button on their remote controls. And when you entered these players’ Home menus, you found that Oppo provided facilities for streaming Best Buy’s CinemaNow, something called Film Fresh (did anyone ever use this?), YouTube, Pandora, and Rhapsody. Given the rapid changes in the streaming marketplace, it’s no big surprise that some of these sites are now moribund or extinct. What was harder to predict was the spectacular rise of various Roku-like devices that were much easier to use, as well as the decision by Japanese, Chinese, and Korean electronics giants to incorporate many streaming features into their smart TVs. The result was that many buyers of the BDPs ended up using them only to play discs.

Enter Oppo’s newest universal BD players, the UDP-203 4K Ultra ($549) and UDP-205 ($TBD). Just to confuse things, Oppo has also just released the Sonica audiophile DAC and network streamer ($799), based on ESS Technology’s ES9038PRO Sabre DAC chip. For Oppo fans (I have pairs of their PM-1 and PM-3 headphones as well as the HA-1 headphone amp), it’s become obvious that Oppo is spending their design capital on products that solve specific problems rather than Swiss Army Knife one-box solutions.

Because the UDP-203 is quite different from its predecessor, I contacted Jason J. Liao, Oppo’s chief technology officer and VP of product development, and asked him to tell me about what’s new under the UDP-203’s hood: Sure enough, Oppo makes a lot of changes in technology before they think that a prototype is worthy of a new model number. This is why Oppo doesn’t issue a new model with every change of season -- they wait until there’s a good reason to make a change.

We actually changed a lot. The goal was to add UHD Blu-ray and UHD video-file support, but we removed the “over the top” audio- and video-streaming service apps, like Netflix. Supporting UHD involves a lot of underlying hardware changes, particularly in the processing power of the decoder chip, the HDMI transmitter specifications, and HDR support. We decided to not include streaming services so we can fully utilize the hardware for the best possible UHD playback experience, basically designing the UDP-203 with a “purist” approach for disc and file playback.

So the underlying hardware changes between the 103 and the 203 are more than you might think:

All these are for supporting UHD and HDR -- as you can see, faster processor, fatter pipelines to get the data in and out, and tighter integration due to the much higher data rate.

Fatter pipelines and higher data rates are ideas we can all get behind -- a perfect example of how Oppo works with its customers to design and implement meaningful product changes. 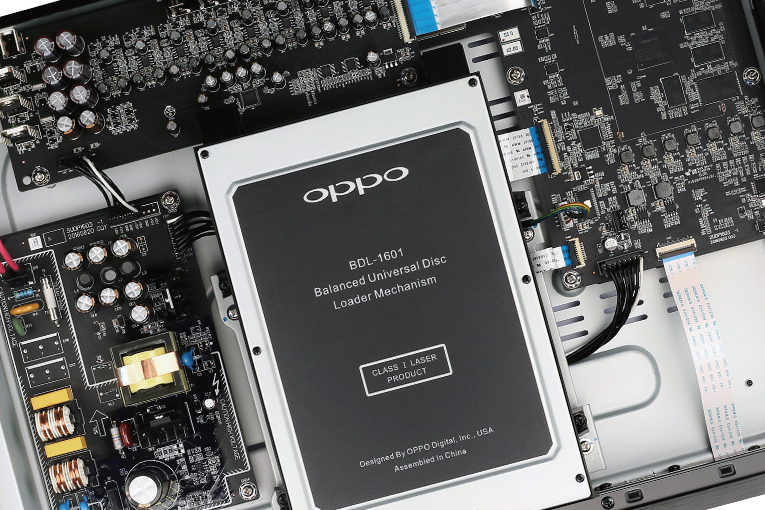 Liao also said that there’s one big gain for those of us who spend too much money on high-definition music, as well as one loss: “On the audio side, the UDP-203 no longer supports internal HDCD decoding (the BDP-103 supports this). However, the ’203 gains DSD2x (sometimes called DSD128) file playback, while the 103 can only support DSD1x (DSD64). These feature changes come with the new decoder processor chip.” I have way more HDCD discs than DSD2x files, so for me this is a net loss.

“Oh, the remote control had a minor revision -- we added a motion sensor so the backlight of the remote is now automatic.”

That’s something I wish would be added to all remote controls.

Finally, although I’m not set up to play Dolby Atmos and DTS:X files, the UDP-203 is -- those of you with the requisite speaker setup, have at it.

Are you an Oppophile who has a BDP-103 and is wondering if it’s time to upgrade to the UDP-203? The two machines look virtually identical. What you gain with the ’203 are Ultra High Definition (UHD) playback, more internal horsepower for processing, updated inputs and outputs, built-in Wi-Fi, and a much more attractive graphic user interface. The UDP-203 loads BDs much faster, and its remote is much easier to find and use in the dark. 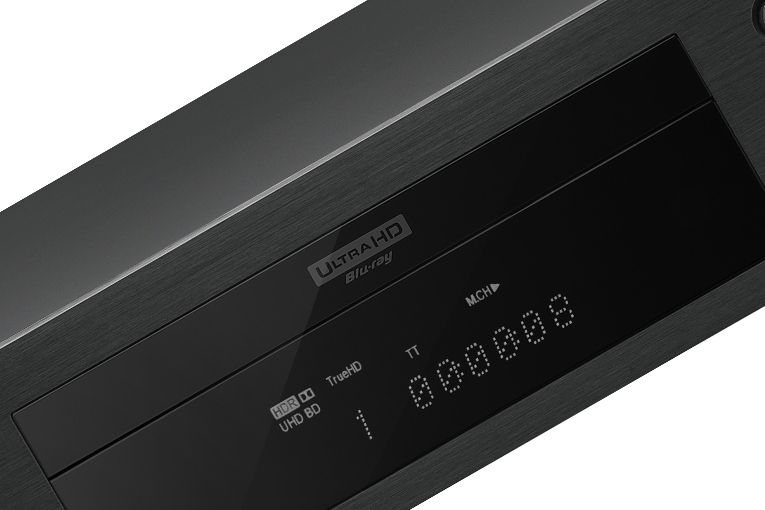 I remember the main attraction of the first Oppo DVD players: the fact that we could use a series of hacks to get them to play the myriad Chinese and Korean movies on Region 3 and 6 DVDs. That opened a treasure trove for film fanatics. Suddenly we could see all those hidden treasures by directors John Woo, Zhang Yimou, Ang Lee, and Chen Kaige. Unfortunately, now that we’re well into the era of BD and UHD, Region Codes are harder to hack, and Oppo is strictly following the rules. We’ve lost access to thousands of films, but at least we’ve picked up all those UHD discs.

How do you feel about UHD discs? So far, there aren’t many. In fact, as of this writing, Amazon offers only 123 UHD BDs, most of them sci-fi or fantasy titles. I was hoping for Doctor Strange, hands-down winner for Most Spectacular CGI Ever. No gots. J.J. Abrams’s three Star Trek films are all available and are good options. When I ran the UDP-203 through a Sony Bravia XBR-65X850B, a 65” LED display, the picture offered a stunning entrée into the director’s vision. It’s hard to imagine another player that can compete with this level of sophistication. Running it through a non-UHD TV like the 75” Samsung UN75F6400AFXZA reduced the UDP-203’s advantage over the BDP-103. You still get the new GUI and faster startup times, but the picture quality, already a strong suit of the BDP-103, is so similar as to be hard to tell apart. 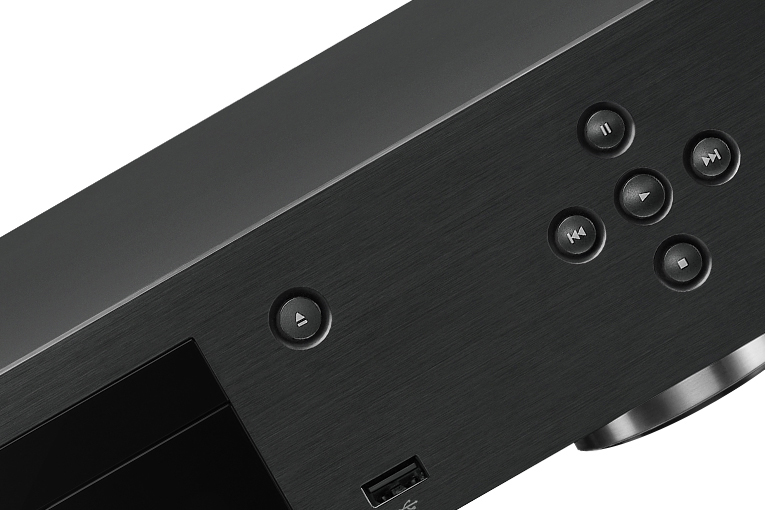 Lucy is a wonderful film that apparently flew too far under or over most film critics’ radar. Director Luc Besson is a clever and imaginative filmmaker. He’s directed a couple dozen films in his career of 30-plus years, many never theatrically released in the Americas outside Québec. He has an awe-inspiring vision for how film can look, and with films like The Big Blue, La Femme Nikita, Léon: The Professional, and Atlantis, his résumé is impeccable. Lucy showed just how good a job the UDP-203 could do. Scarlett Johansson is not too tough on the eyes, and the constant close-ups of her provide a great opportunity to compare. If you have a really huge screen, say 100” or more, I have no doubt the extra pixels and higher fill ratio will pay off nicely. At 65”, I could see a difference between the old and new players, but it didn’t jump out at me.

The UDP-203’s USB 3.0 inputs can upscale everything, including data from USB hard disks and thumb drives, as well as networked music and video content from DLNA servers and SMB share. Virtually any input can be upscaled to 4K at 50/60Hz -- four times the resolution of a 1080p Blu-ray Disc.

Audio is handled with similar aplomb. The UDP-203 can accept PCM audio signals with resolutions up to 24-bit/192kHz in all popular file formats, including AIFF, ALAC, APE, FLAC, and WAV. It plays DSD64 natively, or you can convert it to PCM; DSD128 signals are converted to PCM. Good, original analog recordings, such as Miles Davis’s Kind of Blue (Columbia/Legacy), in DSD64 revealed some of the most beautiful reflections of what it must have been like to have actually been in the room at Columbia’s 30th Street Studios in 1959, from the moment Bill Evans and Paul Chambers begin “So What” until the last notes of “Flamenco Sketches.”

Next up were downloads from Acoustic Sounds of Cat Stevens’s Tea for the Tillerman in DSD64 and DSD128 (A&M). While there’s been some controversy about whether these were two different masterings, the sound of both was flawless, and I had no problem getting the files to play from a thumb drive. Finally, with the recent death of jazz guitarist Larry Coryell (1943-2017), I went back to the quintessential From the Ashes, his duet album with Indian violinist Dr. L. Subramaniam (DSD64, Water Lily Acoustics). Dr. Kavi Alexander, the producer, understands how important it is to get out of the way and let the musicians play. He recorded the album for his Water Lily label in 1995, just a few weeks after the death of Subramaniam’s beloved wife, Viji, and the album is suffused with the powerful emotions these two musicians -- who by this time were old friends -- must have been feeling. Listen to the opening of “Beyond the Flames,” especially Subramaniam’s pinched notes, which sound almost like tears falling to the earth. 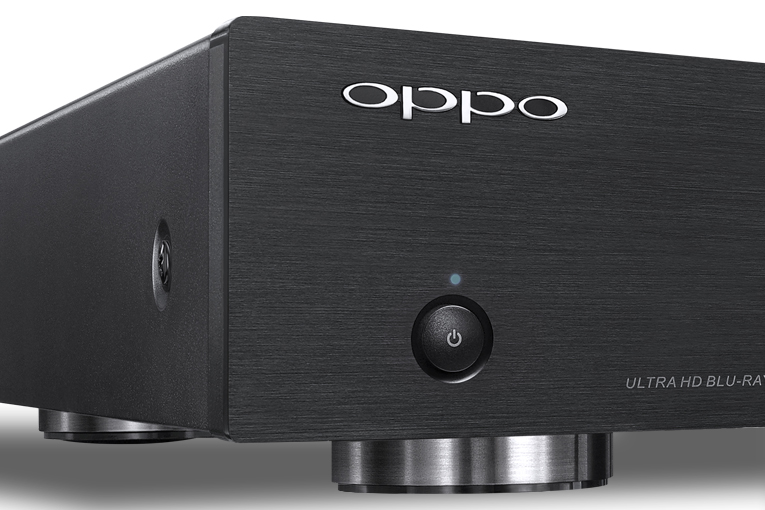 All in all, Oppo Digital has another winner in the UDP-203. If you have an Oppo BDP-103 or even a BDP-93, you already have a splendid machine. It all boils down to the feature set, and if your system is set up to handle what the UDP-203 offers. I think the GUI and remote control alone are worth the asking price. Everything else just reflects Oppo’s usual job of getting everything right. Oppo’s on top again.