To fans of the Big Bang: So you’ve assembled this incredible home theater and now you’re looking for movies to watch. You’ve done the big explosions and the death-defying race scenes. You’ve seen the 3D stuff come flying off your screen. You’ve shown your buddies the close-up collisions from NFL Films. The whole "big bang," "oh my God!" school of filmmaking holds no more surprises and is now, frankly, boring.

To rabid fans of Turner Classic Movies: You’ve seen the complete works of the great directors John Ford, Howard Hawks, Preston Sturges, and Billy Wilder. Your primary love is for Alfred Hitchcock, not only for his sense of mystery, but for his films’ kinky, psychosexual undercurrents. And you’re certain that no one is making good movies anymore.

I’d like to unite these two disparate strands of today’s film market by introducing you to Darren Aronofsky.

Almost everyone has heard of at least one of Aronofsky’s films, though ticket sales for most of them have been criminally low. The director’s five feature-length films are Pi (1998), Requiem for a Dream (2000), The Fountain (2006), The Wrestler (2008), and Black Swan (2010). Each of Aronofsky’s movies features the intensity sought by Big Bang fans, but accomplishes its powerful effect by building the tension and raising the stakes. 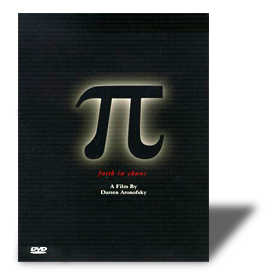 Imagine James Bond’s poor body making its way through torture, car wrecks, gunshots, stabbings, beatings, explosions, falls, and unending sex -- but none of it really matters, because we know that our hero will live to star in the next Bond flick. Aronofsky provides far more crushing stimuli -- he pushes his heroes and heroines into places where they must make wrenching decisions that could result in the loss of their minds or their lives.

Aronofsky’s first feature-length film, Pi (the title is actually π), is a philosophical, mystical, science-fiction thriller beautifully filmed in black and white for less than $100,000. Despite that paltry budget, it’s hardly a cheap film. It’s about Maximillian Cohen (Sean Gullette), a man who’s quite smart -- in many ways, like some of Aronofsky’s Harvard classmates. He’s locked himself away in a computer lab, where he slaves away at his theory that he can convert all of nature -- as in God -- into a mathematical formula. Soon, representatives of both Wall Street and organized religion come calling, trying to beg, borrow, buy, or steal his work. The depth of Cohen’s thought is also the depth of his potential for losing his mind, and that’s where the film’s tension is rooted. Which would you choose: enlightened insanity or intolerant sanity? The grainy black-and-white photography adds to the sense of impending doom, and it all adds up to something a lot scarier than a car chase.

There is solid connection between Aronofsky and Alfred Hitchcock. Like the great master, Aronofsky is no fan of simple Big Bangs. In Hitchcock (1967), a book-length interview with French director François Truffaut, Hitchcock defined a director’s problem as having to pick between suspense and surprise. He describes a scene of two people sitting at a table with a hidden bomb. Bang -- the bomb goes off and, as people panic and flee, the audience enjoys the thrill of a 15-second surprise. But suppose the audience knows that a bomb has been planted under a table, set to go off at 1 p.m., and they’re shown a clock that tells them it’s now 12:45 p.m. 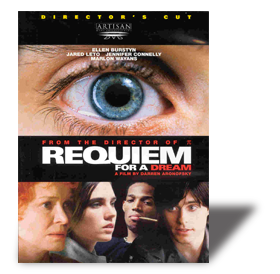 For the next 15 minutes the director can toy with that audience, slowly building the tension to near breaking point. At that point, the detonation of the bomb is almost a release, a resolution of tension. Hitchcock calls this suspense. His analyst might have called it foreplay with an orgasm substitute. The former scene gives you 15 seconds of surprise, the latter 15 minutes of edge-of-the-seat suspense. Aronofsky’s strength, like Hitchcock’s, is his ability to create lengthy foreplay. Unfortunately, this extended seeping and surging often worries less sophisticated audiences used to immediate consummation.

TCM fans, especially those who are Hitchcock devotees, might like Requiem for a Dream. Not a film for the priggish or the doctrinaire, it requires a strong constitution. The story revolves around a group of drug addicts and what they live through daily as they constantly search for drugs and the money to buy them. Aronofsky’s twist is to add an older person (played by Ellen Burstyn) who is an addict of a totally different type. In this film, psychosexual savagery and the relentless horror of impending calamity create terror that borders on that triggered by the shower scene in Hitchcock’s Psycho. Aronofsky’s depictions of what goes on in an addict’s inner life should be shown in every drug-treatment center in America. Requiem for a Dream is my pick for his masterpiece . . . so far. But it’s a tough 102 minutes.

Not all of Aronofsky’s films are thrillers, though every one of them is full of thrills. And while all of his films include romance, love is seldom the central premise. The Fountain, his single genuine romance and a commanding story about the power of love and its ability to initiate a resurrection, is also his least understood film. 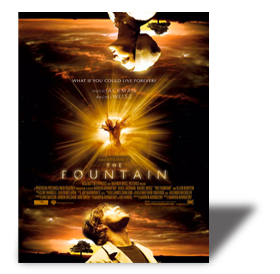 Sight and Sound, the British Film Institute’s famed publication, said that "The Fountain emerges from its own purple haze as unarguably the wackiest Hollywood movie of 2006. That is, the most unintentionally ridiculous pap. Writer/director Darren Aronofsky reportedly nursed this mutant child for years, and it does in fact evoke the foggy head-space of a teenager dubiously blessed with too much good weed and an unfettered devotion to the books of Carlos Castaneda. It’s difficult to recall another American film that, in pursuing a passionate and personal vision, goes so maddeningly, uproariously wrong."

Movie lovers who enjoy the genres of fantasy and/or romance are used to suspending reality in favor of a potentially moving storyline. That The Fountain requires an extra helping of that suspension is because Aronofsky was forced to cut both its budget and its running time. In the great tradition of such films as Once Upon a Time in America and Blade Runner, the blame for any of The Fountain’s problems of continuity or underdeveloped themes must be laid at the feet of the suits. Still, even with the cuts, The Fountain is a gorgeous film about the motivations of authors, in this case one who is dealing with a terminal illness. The fantasy doesn’t require the leap of faith of a Somewhere in Time or a Ghost, but it does require the viewer to pay attention and go with the flow. Given that, it’s a moving film that’s easy to get lost in. As Roger Ebert wrote, "There will someday be a Director’s Cut of this movie, and that’s the cut I want to see." Agreed. 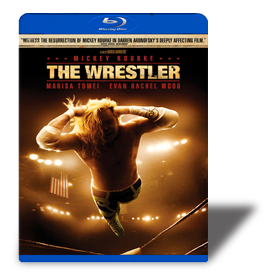 Aronofsky’s next film was also a resurrection of sorts -- this time, of Mickey Rourke’s career. The Wrestler could have been titled The Actor, so closely does it hew to Rourke’s own story. Both character and actor are known as journeymen-level practitioners who have made themselves into freakish-looking tough guys in attempts to sustain careers that were over long ago. And both have had a comeback of sorts. Aronofsky’s genius is in how he muddles our perceptions of the actor with the story of the character to create a deeper meaning within his film. Rourke and his character, Randy the Ram, show a tenderness and a longing that surprise us. The wrestler desperately wants some love in his life, preferably from his daughter, and from a stripper he’s met. We can also feel Rourke’s desperation to take what could be his last chance to star in a film and show people he’s not a has-been -- the same baggage the Ram carries into the wrestling ring. The juxtaposition of Rourke and the Ram is almost casually brilliant, the type of casting that would scare most directors. By embracing the very collocation, Aronofsky raises the results to another plane altogether, so good that Rourke was nominated for a Best Actor Oscar for this role.

Black Swan is Aronofsky’s most acclaimed film, partly because it tells a direct story while seeming consciously "arty." It is another case of character and actor disintegrating into each other, albeit one step removed. The symbiosis doesn’t occur between Natalie Portman and her character, ballerina Nina Sayers. Instead, it is between Nina Sayers and the character that she dances onstage: Princess Odette, the White Swan, in Tchaikovsky’s ballet Swan Lake. What makes the film truly creepy is when Nina’s evolution into the White Swan instead turns to devolution and she becomes more like Odile, the Black Swan. 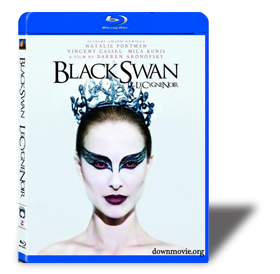 All of this has set in motion Nina’s conscious decision to flirt with insanity -- as did the lead characters in π, Requiem for a Dream, and The Fountain -- in order to achieve a cherished goal. For this performance, Portman won the Oscar for Best Actress.

Do we always want artists to dwell on these obsessions and passions? Think of the genre in which a good person makes a deal with the devil, whether it’s Goethe’s Faust, bluesman Robert Johnson, Niccolò Paganini, or the main characters of O Brother, Where Art Thou? Aronofsky’s characters offer not only their souls, but their sanity and, ultimately, their lives to allegorical devils: drugs, careers, and glory. Whether or not they get a fair trade is the subject at the core of these films.

If Hollywood doesn’t drain the innovative stimulus from Darren Aronofsky’s artistic soul, he could have a great career. He gets to something deeper and more profound than do most other directors working today. It isn’t often that the same director can please both the Big Bang and the Turner Classic Movies crowds, but there’s a good chance that, 50 years from now, his films will be proudly shown on TCM or its equivalent. Luckily, we can watch them today.