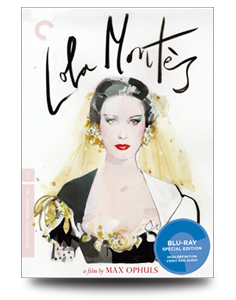 “Lola Montès is in my unhumble opinion the greatest film of all time, and I am willing to stake my critical reputation, such as it is, on this one proposition above all others.”
-- Andrew Sarris, Village Voice, 1962

We all love a snarling fight, and few films in history have created such a feud as Lola Montès. Back when the New York City film critics wielded the ultimate power in world cinema, Sarris’s statement created an uproar heard around the world. Since few people had ever seen the film, the first reaction was to generate high expectations and a groundswell of ticket sales for its showing at the New York Film Festival.

While many viewers agreed with Sarris’s breathless recommendation, most scratched their heads and wondered what the man had been smoking. No one would have been more surprised, or more sanguine, about Sarris’s verdict than the film’s late director, Max Ophüls. The movie was Ophüls’ only film in color, and in many ways it was the culmination of all he had learned in his quarter century in the film business. Ophüls, a German Jew, had fled his homeland in advance of Hitler’s rise to power. A steadfast romantic and creator of the most kinetic cinema of his day, he made films in Germany, Italy, Holland, France, and the U.S., all in the local languages. By the time he made Lola Montès, he was 53 years old and widely respected not only by the bearded intelligentsia of film but also by the French New Wave, particularly auteurist François Truffaut.

Lola Montès was the most expensive film ever made in France, which was enough to make the mob-connected producers nervous. They had handed Ophüls a tawdry potboiler paperback that had been a bestseller in France, and then dictated that he use an actress more famous for her breasts than for acting. The director sidestepped these potential impediments and delivered a masterpiece of color and carousel-like movement. Ophüls was the father of the long tracking shot, where the camera is mounted on something similar to train tracks and moved through the set’s space to give a feeling of energy and to reveal something new about the world the movie inhabited. He made such extensive use of the technique that he was pegged by some as a one-trick pony.

So many have used it since (from Hitchcock to Cameron) that the device is now a bit tired, but it was disorienting to the audiences of 1955. In Lola Montès, Ophüls also used a flashback technique that paid little attention to timelines, another thing that worried the audience, most of which thought they were going to see a potboiler with the hope of a glimpse of breast from the zaftig and daring Ms. Carol. Instead, they got a bit of an avant-garde slap in the face.

When the producers saw the audience’s angry reactions, they stepped in and took over the film, viciously cutting and repiecing it. Ophüls fought them as much as possible, but the moneymen won. Two years later, Ophüls died. The film went to its grave as a 91-minute chronological mess that interested no one.

Still, Truffaut’s 1955 review in the periodical Arte helped maintain a few critics’ interest. “The cinematographic year now ending has been the richest and most stimulating since 1946,” he wrote. “It opened with Fellini’s La Strada, and its apotheosis is Max Ophüls’ Lola Montès. Like the heroine of its title, the film may provoke a scandal and arouse passions, if we must fight, we shall; if we must polemicize, so be it . . . The way the narrative is constructed, the way it hurries the chronology, reminds us of Citizen Kane . . . The structure is new as well as daring; it could well confuse the viewer who lets himself become distracted or who comes in the middle. Too bad. There are films that demand undivided attention, Lola Montès is one of them. The film is constructed rigorously; if it throws some viewers off, it’s because for 50 years most films have been narrated in an infantile way.”

Strong words. When the film appeared to such acclaim at the first New York Film Festival in 1963 in a somewhat restored version, it generated financial interest from producer Pierre Braunberger, who bought the remaining film stock along with all rights to the film. His company released a version almost identical to Ophüls’ original, which was shown at the 1968 New York Film Festival, an unprecedented second showing. Shortly after, Sarris wrote, “Back in 1962, I hailed Lola Montès as the greatest film of all time, and I stand by that judgment . . . Lola is probably the single most important experience of my critical life, the one film more than any other that has shaped my aesthetic . . . Lola Montès is clearly the film of the year, or any year.”

Stanley Kaufman took a sarcastic tone, countering Sarris’s thoughts in The New Republic: “The money-men foisted Miss Carol and a cheap novel . . . on Ophüls, so let’s not criticize those elements, let’s concentrate on Ophüls’ marvelous décor, detail, and camera movement and, by the simple act of appropriate omission, presto, we have a masterpiece . . . I disbelieve in this hierarchy. There are money-men involved in every art. No one would dream of praising an architect because he designed his interiors well, if he had debased his overall form to please his client’s pocketbook. Why a special leniency for film? Ophüls, who in some ways was masterly, is extolled as a master of romance. To speak only of Lola, I see him sheerly as cynic, burdened with this trumpery novel and this mammary star and deciding to give it back to the world in spades. One critic envisions Lola in the circus as a premise ‘redeeming all men both as a woman and as an artistic creation.’ This woman? This artistic creation? The last scene, in which the crowd presses forward to buy kisses of the caged Lola, gave me a vision of Ophüls himself chuckling at the yahoos wonderstruck by this earlier Zsa Zsa Gabor (an earlier Paris Hilton), this ‘celebrity’ in its synthetic present-day sense, a crowd scrabbling to pay for a touch of this scandal-sheet goddess. And, encompassing this, I also had a vision of Ophüls chuckling at his film audiences, as they press forward to pay for a chance to adulate his caged talent.”

It’s ironic that the real Lola Montès created as much conflict as Ophüls’ film. Eliza Gilbert (1821-1861) was born in Ireland and raised in England, Scotland and India. A wild child, she was sent to private schools to be straightened out, but none worked. She married at 16 and separated at 21. She had to make a living, so she became an exotic dancer, renaming herself Lola Montèz. She was mistress to Franz Liszt and King Ludwig I of Bavaria (who made her Countess of Landsfeld), whose subjects were so furious about the liaison with Montèz that he was forced to abdicate. After another marriage failed, she moved to the U.S., where she became famous (infamous, too) for her dancing. After another marriage failed, she headed for Australia, where the public considered her dancing to be obscene (she wore no underwear, they claimed). When a newspaper denounced her, she attacked the editor with a buggy whip! Montèz moved back to New York City, where she spent her last few years trying to help young prostitutes. It’s said she died penniless. The film takes some liberties with the second half of her life, displaying her as a circus attraction where people flock to pay 25 cents to ask her lascivious questions about her past or a dollar to kiss her hand.

For the intervening years, Lola Montès was a regular on Turner Classic Movies, film festivals, and on various, mostly unimpressive DVDs. Then Cinémathèque Française offered to work with Braunberger’s daughter to do a painstaking digital restoration of the film. After gathering all known footage, they carefully assembled the best possible print, reset the color to its original luster, cleaned up all the streaks and smudges, and re-released the film to the general public in 2008. It is that print that Criterion offers in its stunning new realization of the film.

We have come to expect the finest mastering and most scholarly research from the folks at Criterion, and Lola Montès is a perfect example of the care they take with our heritage of classic films. The colors are breathtaking, and the widescreen picture is filled with an obsessive amount of fine detail, be it in the intricate costume designs or the busy, lived-in set decoration. The extras are superb, especially the interviews for Max Ophüls ou le plaisir de tourner, a 1965 episode of the French television program Cinéastes de notre temps. Ophüls’ son, Marcel, a fine documentarian himself, also made a film titled Max by Marcel, about his father, and it’s been included. (Marcel’s movie, Le chagrin et la pitié, is the four-hour-plus film on the terrors of Nazism that Woody Allen and Diane Keaton are standing in line for in Annie Hall. Remember the scene? Where the man behind them is pontificating about Fellini, Beckett, and Marshall McLuhan and Woody pulls McLuhan out from behind the billboard? Classic moment.)

In the nicest of all possible improbabilities, Amazon.com currently sells the Criterion Blu-ray of Lola Montès for less than the DVD! 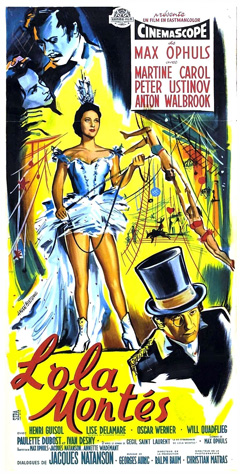 My own response to Lola Montès falls between Sarris and Kaufman. It is undeniably luscious, and I think Ms. Carroll is much better than she’s given credit for. Its main problem is that it has been so influential that we’ve now seen all its tricks in later films. But can we call the 1929 Bugatti Type 41 Royale Coupe Napoleon the greatest car ever made? Or is the 2010 Bugatti Grand Sport the greatest car ever made? Time tends to sweep away all that was great about something when everyone starts imitating a masterwork. What was grand becomes hackneyed, what was startling becomes commonplace. Much of what was breathtaking about Ophüls’ work has been purloined by other directors. Some have had the greatness to make it better (Hitchcock’s use of the tracking device in Vertigo, the constant motion of John Woo’s Hong Kong films, and Luhrmann, who made Lola Montès’ spiritual daughter, Moulin Rouge), others (every TV action show) have simply cheapened it. In any case, any film that gets a few mentions as the greatest film ever made deserves our consideration.

While Ophüls’ work still inspires controversy, some of the world’s most respected critics come close to agreeing with Sarris’s original assessment. The great curmudgeon of film criticism, David Thomson, is smitten by Ophüls’ films, especially Lola Montès. He writes in the masterful New Biographical Dictionary of Film that Ophüls was misunderstood, and critical opinion was dominated by “ignorance or bland assertions that he was a frivolous, romantic director concerned with decoration rather than content, a stylist for style’s sake, a chronic camera fidget . . . Max Ophüls is one of the greatest film directors. He is frivolous only if it is frivolous to be obsessed by the gap between the ideal and the reality of love.”

Roger Ebert is another fan. “Ophüls slides through a series of flashbacks with as much ease, and psychological completeness, as Welles exhibited in Citizen Kane. The structure of the film is terribly artificial -- flashbacks suspended from a fantasy circus -- and the style itself is a highly mannered romanticism. But it works.”

Will you put Lola Montès at the top of your all-time list? Maybe. Probably not. But any film that inspires this much controversy deserves a place in a serious film collection, and it’s hard to imagine it getting a better release than Criterion has provided.