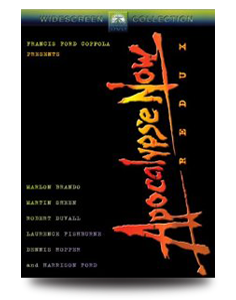 Ultimately, my aim with Apocalypse Now Reduxwas to achieve a richer, fuller and more textured film experience that, as with the original, lets audiences feel what Vietnam was like: the immediacy, the insanity, the exhilaration, the horror, the sensuousness and the moral dilemma of America's most surreal and nightmarish war.
-- Francis Ford Coppola, May 2001

Captain Willard (Martin Sheen) has been assigned to assassinate Colonel Kurtz (Marlon Brando) because, as his General tells him, "he's out there operating without any decent restraint, totally beyond the pale of any acceptable human conduct. And he is still in the field commanding troops." Kurtz had killed four VC for spying and refused to turn himself in, so Willard’s job is to kill Kurtz. Willard sees the insanity clearly and thinks to himself, "Shit . . . charging a man with murder in this place was like handing out speeding tickets in the Indy 500." For the next three hours, Willard sets out on a journey into the heart of darkness. He’ll run across scared Navy kids, insane cavalry commanders, forgotten and leaderless outposts, shanghaied Playboy bunnies who have to sell sex for survival, French plantation owners trying to protect their land in the middle of a war, and finally a poet-warrior whose only strategy is to inject more horror into war than his adversaries.

Loosely based on Joseph Conrad’s Heart of Darkness (1902), Apocalypse Now was a lightning rod of a film, attracting storms of intense judgments from everyone in Hollywood. Some adored it while others wanted to burn it in the city square. When it was released in 1979, the tales from the set were unbelievable. It was supposed to be completed in about four months. Instead, it took sixteen months. Imagine this production scenario. After two weeks of production, Coppola replaces the star, Harvey Keitel, with Martin Sheen, a man with a mostly TV soap-opera career (As the World Turns, The Edge of Night). Then Sheen, at the ripe old age of 39, has a heart attack. A monsoon in the Philippines destroys all the sets. Brando, with his $1,000,000 advance, shows up, reportedly drunk and a hundred pounds overweight without having read Conrad’s Heart of Darkness or Coppola’s script. Worse, once he has read the script, he refuses to use it, demanding that he be allowed to improvise his lines. He also demands that he only be shot in shadows to hide his ample avoirdupois. Then Ferdinand Marcos, the dictator in the Philippines who had promised Coppola use of his war machine, pulls all the helicopters and boats to put down a civil rebellion. After about nine months, the film company is screaming that the film is way over budget. Coppola has to agree to fund the overrun, which brings him to the brink of bankruptcy. He loses a hundred pounds from depression, finally threatening numerous times to kill himself. The studio wants their film, and all Coppola can provide is a worn-out psyche and a five-and-a-half-hour workprint. The dialogue is unusable from all the extraneous noises. Then, on top of everything else, nobody can agree on an ending. Rumors of Coppola’s actions were so bizarre that he even ended up being lampooned on Saturday Night Live, portrayed as Kurtz himself, lost in the backwash and gone completely nuts. 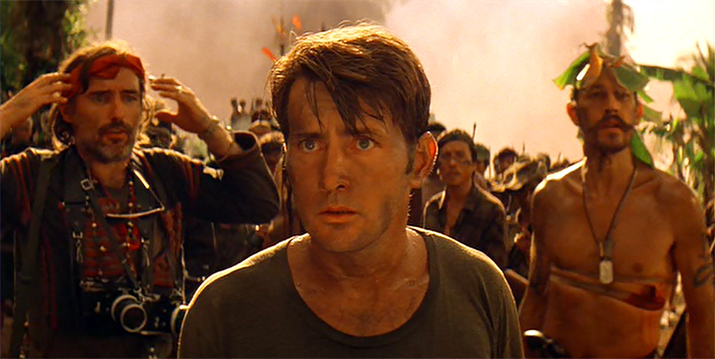 When the film was finally released, it still wasn’t complete. Depending on where you lived, you might get one of two versions. With different endings! In the end, though, Apocalypse Now won over adversity. The film was a masterpiece in any of its iterations. It was first released in L.A. and New York in a 70mm print with no ending credits, just a simple fade to black. It was later released in a 35mm print, complete with explosions and ending credits. While the 70mm version was tremendously more powerful, in both films we had the sense of being on a perilous and terrifying journey with enough characters and intrigue to think that John Ford had been slipped some LSD and sent away to make a war film. Coppola took film to a new dimension where reality and psychotic fantasy were inextricable, and the art form would never again be the same.

Apocalypse Now is the quintessential Vietnam War movie. It’s not because it is more accurate or true to the reality of the struggle. Leave that to lesser hands like Oliver Stone (Platoon) or Michael Cimino (The Deer Hunter). Instead, Apocalypse Now is a deeply psychological examination, heavy on the angst and anomie, which portrays a man searching for the embodiment of evil, questioning through internal dialogue about the meaning of evil and its effects on the world. It also takes us on the same ride, forcing us to have our own internal dialogue about the nature of evil. Is Kurtz really the bad guy? Or is Willard the villain? How about Kilgore (Robert Duvall)? Or the officers that so coolly put a death sentence on Kurtz? If Kurtz feels the best way to stop the horror of war is to be so brutal and callous and cold blooded that the enemy is terrified and retreats, is he wrong? If Willard accepts an order to kill another human being without so much as a true and abiding belief that his target is evil, then what is he other than an assassin? Or, as Kurtz defines him, "You're an errand boy, sent by grocery clerks, to collect a bill." If Kilgore is willing to destroy a village and kill women and children so he and his men can surf, then why isn’t he the villain? Or ultimately, is war itself the villain; simply the creation of politicians seeking their own agendas with little regard for its devastating effect on the soldiers and civilians in its path? Apocalypse Now submerges us in a malaise of moral ill and, while letting us in on Willard’s vain attempts to sift right from wrong, forces us into the same malaise. Coppola goes beyond getting us to identify with his characters. He thrusts us into the same problem, albeit safe from the menace of war. And in doing so, he reveals more about the true horror of war -- what it reveals of and evokes from the human condition. He has taken us on our own trip into the "heart of darkness."

The cast is uniformly excellent. Who would have expected Sheen, a man with 14 years of second-rate TV experience, to be able to carry a big-budget film? Duvall, a spectacular actor, takes his role and makes an icon of it. When he enters into the following monologue, you are in the presence of an actor completely in the zone. He’s looking over the water to the village beyond. He suddenly turns pensive and philosophical. 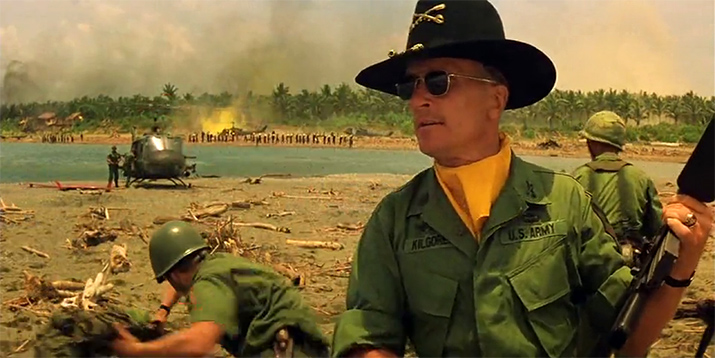 "You smell that? Do you smell that? Napalm, son. Nothing else in the world smells like that. I love the smell of napalm in the morning. You know, one time we had a hill bombed, for 12 hours. When it was all over I walked up. We didn't find one of 'em, not one stinkin' dink body. The smell, you know that gasoline smell, the whole hill. Smelled like . . . victory." (Long pause with a contemplative look on his face.) 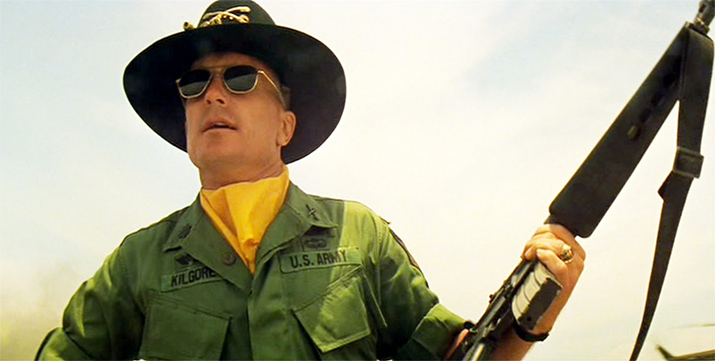 The original 35mm release was 153 minutes, cut down from a 330-minute workprint. What happened to the other 177 minutes? Luckily for us, inveterate tinkerer Francis Ford Coppola has given us a new version (perhaps the last?) that gets a name change (Apocalypse Now Redux) and adds 53 minutes of new material. But unlike the companies that give us expanded versions of movies that we never cared about in the first place, this new version adds layers of new meaning and makes the film an altogether more transcendent experience. Both Willard and Kilgore gain new depth. Kurtz makes more sense. The most heart-wrenching addition is when we again meet the Playmates whose helicopter crashed in the jungle. But the biggest change is the addition of an entire set piece at a French plantation. It not only brings a moment of respite, it makes the rest of the film appear even more surreal in relief. Thankfully, the ending is the same as the 70mm release. A simple fade to black and it’s over.

Apocalypse Now Redux comes in a simple package with virtually no extras. The mastering is close to perfect and provides some tough dark scenes to check out your monitor’s capability. The DVD of the original version is just slightly less crisp but otherwise first-rate. Its only additional extra is Coppola explaining the reason for the destruction of Kurtz’s compound in the original 35mm version and why he eventually removed it. The sound on both is superb. I bought both, but I doubt I’ll be watching anything but Apocalypse Now Redux in the future. Absolutely essential.