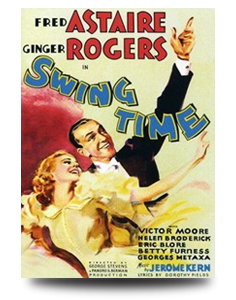 When, in his inaugural address, President Barack Obama said that, "Starting today, we must pick ourselves up, dust ourselves off, and begin again the work of remaking America," I had this crazy fantasy that someone was about to break into song: "Pick yourself up, dust yourself off, and start all over again!" It would have been appropriate. Nor is it possible to imagine that the President and his speechwriter, Jon Favreau, both of whom are very bright, would not have known that the line might resonate even with people who had no idea that "Pick Yourself Up" was written -- in 1936, by Jerome Kern and Dorothy Fields -- in hopes that it would encourage Americans to keep their chins up in the depths of the Great Depression.

And boy, do we need it now. Which makes it the perfect time to go back and watch Swing Time, the film for which Kern and Fields wrote that song.

All romantic musical comedies are farcical in nature, and Swing Time is no exception. John "Lucky" Garnett (Fred Astaire) is a hoofer with a bit of a gambling addiction who is engaged to a girl from a well-to-do family who are concerned about allowing an entertainer into their midst. When, thanks to a prank played by some buddies, Lucky shows up late to his own wedding, his prospective father-in-law wants to send him away, but relents when Lucky promises to make $25,000 before the wedding. Lucky and his pal, "Pop" Cardetti (Victor Moore), hop a freight (it is the Depression) and head to New York City to make their fortune.

There, Lucky meets a dance instructor, Penny Carroll (Ginger Rogers), and promptly falls in love with her. Being a man of honor, he doesn’t want to jilt his fiancée, but Penny is so close and so sexy, and she dances like a dream. Pop comes up with the idea that, as long as Lucky never makes the $25,000, he won’t have to go back. Then, success strikes for the new dancing team of Lucky and Penny, and they have a new problem: How to not make $25,000?

The plot line allowed audiences of 1936 to experience many vicarious feelings. Here was a guy in worse shape than most of them, having to hop freights just to get around, and a gal who squeaks along by giving dancing lessons to clodhoppers. Then, suddenly, they’re thrust into a world of high style, fame, and magnificent wealth, their only problems being how to limit their income while satisfying a matter of honor. People who’d lost their jobs and now faced the threat of having to join a soup line and live in a tent city could lay out a few cents and spend 103 minutes in the company of these happy, wealthy, classy, amusing people whose only concern was how to keep loving each other. 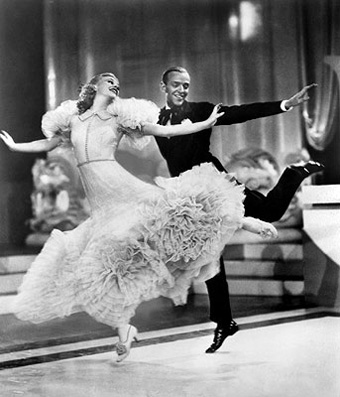 In any farce, the devil is in the details, and here is where Swing Time jumps from being a pleasant Fred & Ginger vehicle to one of the classic Hollywood romantic musical comedies. Lucky and Penny are likable and attractive. Though Astaire was never handsome, he wore clothes like a model, moved with a cheetah’s elegance, and exuded so much cool that only Miles Davis would ever be able to stand up to him. Rogers could be sweetly wholesome and frighteningly sexy, all in the space of a double-take. And Bernard Newman’s gowns clung to her just enough to show her gorgeous dancer’s body to full effect. Victor Moore as Pop and Helen Broderick as Mabel provide ideal comic relief, propelling the farce along while keeping the audience up on the proceedings.

Director George Stevens and producer Pandro S. Berman assembled a perfect crew: the writing, lighting, cinematography, special effects, art direction, costumes, decorating, and music are on the highest plane imaginable. Stevens deserves special credit. The man who would go on to direct such classics as Gunga Din, Woman of the Year, A Place in the Sun, Shane, and Giant was already showing his ability to take control of a big, expensive production while keeping it intimate and touching.

One scene deserves specific comment because it will be easy for some to see it as the harsh slap of minstrel-show stereotypes. The scene is in chapter 21, "Bojangles in Harlem." Astaire learned tap dancing from one of the masters, John W. Bubbles, an African-American who’d had a brilliant career in the Ziegfeld Follies, and had played Sportin’ Life in the original production of George Gershwin’s Porgy & Bess. Unfortunately, no one would have known what Astaire was referring to had the dance been titled "Bubbles in Harlem." The man named in the piece was another famous black entertainer, Bill "Bojangles" Robinson, who would have been much better known to film audiences of 1936 from his several recent appearances in films starring Shirley Temple. In any case, Astaire’s performance includes none of the blatant racism seen in most minstrel shows, and most folks rightly took it as Astaire’s tipping his top hat to the true innovators of tap.

But note the quartet where Astaire performs along with three giant shadows. The precision is so tight, you’d think they truly are shadows cast by Astaire as he dances. But they’re not, as you’ll see. All four parts are danced by Astaire, but as an ensemble, not a solo. In fact, his dancing is so meticulous that he was able to loop the sound of his taps on a separate soundstage in postproduction. Imagine trying that.

Pay attention, too, to the dance scene in chapter 24, one of Astaire and Rogers’ most beautiful seduction scenes. In all of their films together, and in most of Astaire’s films with other dance partners, he eventually breaks down his love’s resistance by dancing with her so beautifully that she can no longer resist. This scene -- six minutes with only a single cut -- took 10 hours and 47 takes to complete. By the end of the final take, Rogers’ feet were bleeding. It’s as nearly perfect a dance number as you’ll ever see.

Of course, there is always the question of whether or not you are a dance-musical lover. I admit it’s a small coterie. Of all the types of film, only fantasy and science-fiction require as great a leap of faith or as willing a suspension of belief, and the audience for musicals seems to have shrunk to almost nothing.

At least there's enough of an audience for Astaire and Rogers that Turner Entertainment was willing to do some work on the prints and the video transfer, and put together a decent commentary and making-of feature. While they haven’t taken the kind of care their parent company took with Citizen Kane, Swing Time has a sumptuous look, and the music sounds clear and clean.

Swing Time won an Oscar for Best Music, Original Song for "The Way You Look Tonight," and was nominated for Best Dance Direction for Hermes Pan’s choreography of "Bojangles of Harlem." In 2004, it was selected for preservation by the National Film Registry, and it is one of only nine musicals in the American Film Institute’s list of the Top 100 Films of All Time.

The DVD is available singly for about $18, as part of a five-DVD set of Astaire and Rogers’ better films for $30, or as part of a boxed set of their complete works for $50. That last set is something I’d try to smuggle onto that mythic desert island -- it’s 17 hours of pure joy.