As everyone knows, life seldom deals you a second hand. Snooze, lose, and all that.

I got lucky with Miles Davis. In spite of the fact that Davis’s recordings—to say nothing of recordings inspired by Davis’s recordings—accounted for about three-quarters of my record collection by 1981, I’d never managed to see him perform live. And chances of rectifying that were growing faint.

Beset by nagging health issues and handicapped by the drugs he was self-administering for pain, Davis quit music in 1976. By his own admission, he didn’t touch his trumpet for the next four years. Firsthand accounts of Davis’s life during his retirement were grim. Biographer Eric Nisenson recounted filthy living conditions in Davis’s three-story apartment building on Manhattan’s Upper West Side. In his autobiography, guitarist Carlos Santana recalls Davis prowling the after-hours clubs, in pursuit of self-destructive distractions.

Rumors would surface occasionally about Davis’s return, but the more time passed, the less credence they were given.

Behind the scenes, though, things were changing. People who cared about Davis were taking action. In 1979, ex-girlfriend Cicely Tyson stepped in and banished those, like Nisenson, who she believed were enabling Davis’s self-imposed exile. Columbia Records president George Butler sent a new grand piano as a gift. Davis’s nephew—burgeoning drummer Vince Wilburn Jr.—was encouraging his uncle to jam with young musicians.

Eventually, all the intervention paid off; in early 1981, Davis agreed to play three shows for veteran music promoter George Wein: a warm-up show at a Boston nightclub, followed by two sets at what was then known as Avery Fisher Hall, at New York City’s Lincoln Center.

My Miles Davis luck began changing when a fan of the radio program I co-hosted offered my broadcast partner and me a pair of tickets for the second of Davis’s Lincoln Center sets.

That July 5, 1981, show was quite a scene: celebrity athletes, actors, and musicians filled the audience, and you could sense the anticipation.

As evidenced on the 1982 album, We Want Miles, some of which was recorded at the Lincoln Center, Davis’s return was something of a musical disappointment. The trumpeter had clearly not regained the full range of his musical voice—some of the tunes sounded leaden, and all of the music seemed slightly behind where Davis’s peers, like Ornette Coleman, had gone, both rhythmically and harmonically.

Nevertheless, Miles was back.

Collectively, it seemed like no one was taking his return for granted. Occasionally—as on a particularly troubling appearance on Saturday Night Live in October 1981—the fragility of Davis’s health made it seem unlikely that his comeback would be long-lived. So, fans like me caught him as often as we could. And Davis surprised us all by touring almost constantly for a decade, until a stroke took his life on September 28, 1991.

Davis’s Montreal International Jazz Festival concert on July 7, 1983, was the fourth show I caught during his comeback, and hearing it again reminds me how far Davis and his band had progressed in the two years since he tentatively stepped back into the spotlight.

Released June 18, on two LPs, as part of a 10,000-copy Record Store Day promotion and scheduled to be more broadly released later this year, Miles Davis Live—What It Is: Montreal 7/7/83 features a lineup of Bill Evans on reeds, guitarist John Scofield, Darryl Jones on bass, drummer Al Foster, and Mino Cinélu on percussion. While Evans, Foster, and Cinélu had been part of the Lincoln Center band, the inclusion of Jones and, especially, Scofield brought greater fluidity to Davis’s music. And, although he had struggled through his first year of touring, Davis had begun to regain his strength and, more importantly, his lip. 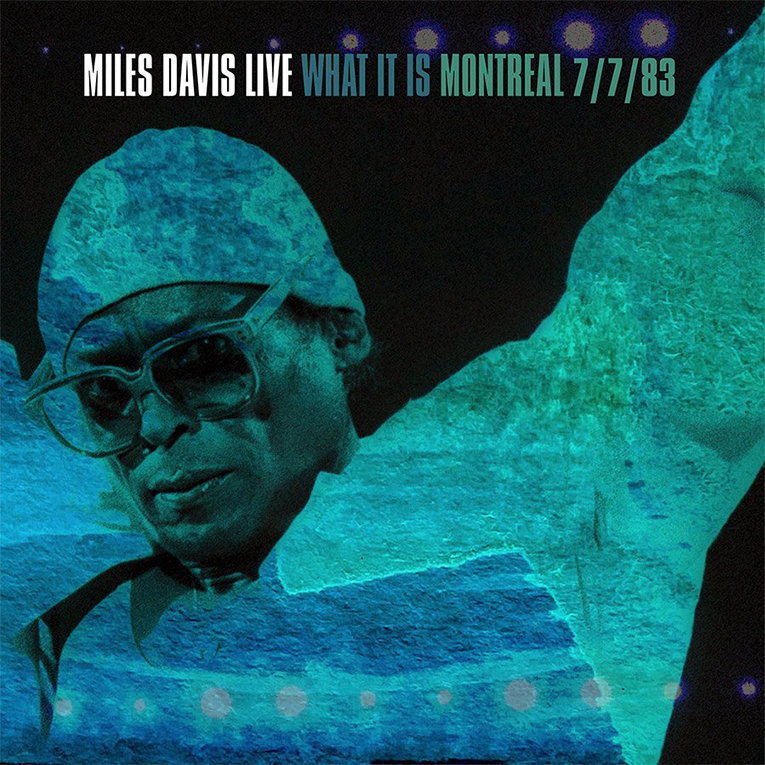 An incredibly canny instrumentalist, Davis was well versed in covering his deficiencies. For example, the trumpeter was recovering from hip replacement surgery when he played a weeklong stint at Chicago’s Plugged Nickel in late 1965. His embouchure and overall strength were not at their best, yet many consider those performances to be the high point of Davis’s vaunted “second quintet,” and consequently one of the high points of the entire history of postwar jazz.

In his early comeback shows in 1981, Davis expressed himself with short melodic phrases and dramatic flourishes. Much of the heavy lifting was done by Evans and guitarist Mike Stern. In hindsight, it’s hard to imagine any other artist relying so much on charisma and reputation alone.

A turning point came in 1982, when Tyson introduced her on-again partner to an acupuncturist, who convinced the trumpeter to stop drinking alcohol and convert to a healthier diet. The change in Davis was apparent when he appeared in Montreal, Canada, at the ’82 festival; his melodic lines were longer and more coherent, he played more open-bell trumpet, forsaking the Harmon mute that allowed him to coast on his signature tone alone, and he seemed to be a happier man onstage, interacting affectionately with his younger sidemen.

In my mind’s eye, I see him looking even fitter onstage the following year. At the 1983 show featured on this recording, his love of Montreal, and the city’s jazz festival, likely played a large part in his contented appearance. Over the years, Davis had formed a strong bond with festival cofounder André Ménard and developed an appreciation for the city’s deep jazz roots. He told Ménard that he found Montreal’s audiences to be more like those in Europe, which Davis enjoyed.

The band took the stage inside the beautiful art-deco Théâtre St-Denis and launched into “Speak (That’s What Happened),” a multipart Davis-Scofield composition that served as the band’s opening salvo for most of the three-and-a-half years the guitarist was in the band. Beginning with a jackhammer funk beat, the piece allowed Davis to get comfortable onstage as he prowled around, blowing occasional notes and flourishes through his wirelessly miked trumpet. Much of the music Davis selected for his shows during this period was arranged for maximum effect, frequently with free-floating time signatures and dramatic exclamations, designed to create a feeling of tension. In that regard, it’s easy to see the fingerprint of Davis’s longtime collaborator, Gil Evans, on this music. Uncredited at the time, Evans had a large hand in arranging much of what Davis created during this period—something the late Greg Tate alludes to in his liner notes for this set.

“Star People” follows, offering the opportunity for Davis to explore some melodic inventions at a leisurely pace. Interestingly, he never reaches for the Harmon mute, something I know will disappoint many listeners who can never get enough of his trademark burred whisper.

At just under seven minutes long, “What It Is” is this set’s only disappointment. A guitar-led piece with solo room for Scofield, Bill Evans, and Davis, its contemporary beat doesn’t sit well with Foster, who sounds like he’s plodding through it. The anchor of Davis’s bands throughout the ’70s, Foster would soon leave to pursue more mainstream jazz, making way for more modern percussionists like Wilburn Jr., go-go music pioneer Ricky Wellman, and John Bigham. This performance makes it clear why Davis made that change.

The heart of the set begins with “It Gets Better,” a highly dramatic arrangement that sees Davis getting playful on trumpet. Despite his taciturn and serious persona, Davis loved to tease people, and here that takes the form of giving the audience snippets of his “old” sound. No matter how far Davis went into electronics, African rhythms, and Indian instrumentation, there were those who continued to pine for the romanticism he had embraced in the 1960s. He knew it, but wouldn’t indulge them.

Following the multiple tempo changes of “It Gets Better,” “Hopscotch” begins with a fast bass pattern, and then Davis steps up with his most creative and energetic playing of the show. Scofield takes charge as the composition melds into “Star on Cicely,” but Davis remains very active, alternating between trumpet and his keyboard.

While Davis’s later bands would usually feature two keyboardists, the trumpeter kept things lean in the early ’80s, choosing to play synthesizer himself. One technique he developed during this time was to use the trumpet voice on his synth to insert percussive accents behind a soloist—an approach he uses frequently here behind Scofield. Another favorite application was to hold a single chord underneath instrumentalists, which he does throughout large portions of “Code 3” and “Creepin’ In.”

The medley of “Hopscotch” and “Star on Cicely” was the apex of the set, with the band’s turn for home marked by Davis’s childlike melody line for “Jean-Pierre,” a piece he played at virtually every concert during his comeback years. In Montreal, “Jean-Pierre” was set apart by the fact that the audience began to clap along with the singsong melody, and perhaps it was that engagement that spurred what followed: a surprisingly gentle solo by Davis that took a jaw-dropping turn into several phrases that echoed the Spanish-tinged music he made with Gil Evans more than 20 years earlier. For many artists, to make passing reference to something enormously popular they’d made earlier would be nothing of note. For Davis, who famously resisted doing so, it was remarkable.

This 1983 Montreal show was one of about eight I saw during Davis’s comeback decade, and I had remembered it as the most musically satisfying. With the benefit of this recording, it’s interesting to reflect on how little Davis actually played, particularly after his showpiece solo on “Hopscotch.” Still, this concert holds together very well for its cohesive flow, and the variety of sonic textures Scofield brought to the stage. It’s little wonder that Davis and Gil Evans decided to drop a couple of short excerpts from the concert into Decoy, the album released the following year and otherwise recorded in the studio. Scofield brought a tremendous amount of energy and creativity to Davis’s band, and the trumpeter came to rely on the guitarist to spark entire compositions with his improvisations, in much the same way that Duke Ellington drew inspiration from soloists like saxophonist Johnny Hodges.

Exceptionally well recorded by Guy Charbonneau for the festival—which had grown out of a project to record live music in Montreal—and mixed by Grammy Award winners Dave Darlington and Steve Berkowitz, What It Is: Montreal 7/7/83 stands as a much-appreciated document of Davis’s unexpected, ten-year encore.