Pianist McCoy Tyner was only 26 when he left John Coltrane’s band in 1965, and interviews with him over the next 55 years, prior to his death in 2020, rarely failed to touch on Coltrane and the saxophonist’s towering legacy. It seems no one was inquisitive enough—and I include myself here; I interviewed him twice—to ask him if Coltrane had performed his cornerstone suite, “A Love Supreme,” more than a single time in 1965, at the Antibes jazz festival in France, and one other time at a Brooklyn fundraiser. It was just a given, and a large part of the myth surrounding the composition, that the saxophonist never returned to his masterpiece after those two occasions.

Those who knew that Coltrane also performed the entire work on October 2, 1965, at The Penthouse in Seattle—and that it was recorded by fellow saxophonist Joe Brazil—kept that fact largely to themselves.

It is difficult to overstate the importance of Brazil’s tapes finally finding their way to this commercial release. Given the suite’s place in jazz history, and the fact the original recording is consistently near or at the top of many fans’ all-time list of favorite albums, the release of A Love Supreme: Live in Seattle is akin to finding a new version of Orson Welles’s 1941 classic, Citizen Kane.

The four movements of “A Love Supreme” were composed by Coltrane during a marathon writing session at his rural house on New York’s Long Island in 1964 and recorded with his working quartet—Tyner, bassist Jimmy Garrison, and drummer Elvin Jones—in early December of that year. As the title suggests, the suite was spiritual in nature, Coltrane’s devotional gift to God, whom he credited with guiding him out of drug addiction in the late 1950s and toward an elevated form of musical expression.

Coltrane’s pursuit of ecstatic release—and the extended saxophone techniques he explored during his quest—left many listeners behind, but the studio recording of the suite remained close enough to traditional harmony that it captured a huge audience.

By October 1965, though, Coltrane was on the cusp of a major change. Already, on the day following his original recording of “A Love Supreme,” he had tried performing it with a larger group. He had also followed up in the studio with an extended ensemble, for an album that would later become Ascension. That fall, Coltrane’s tour to the West Coast saw him welcome a younger tenor player, Pharoah Sanders, into his band, and he began to invite other musicians to sit in. This would eventually lead to the departure of Tyner and Jones, but nothing could deflect Coltrane from the path he was on. 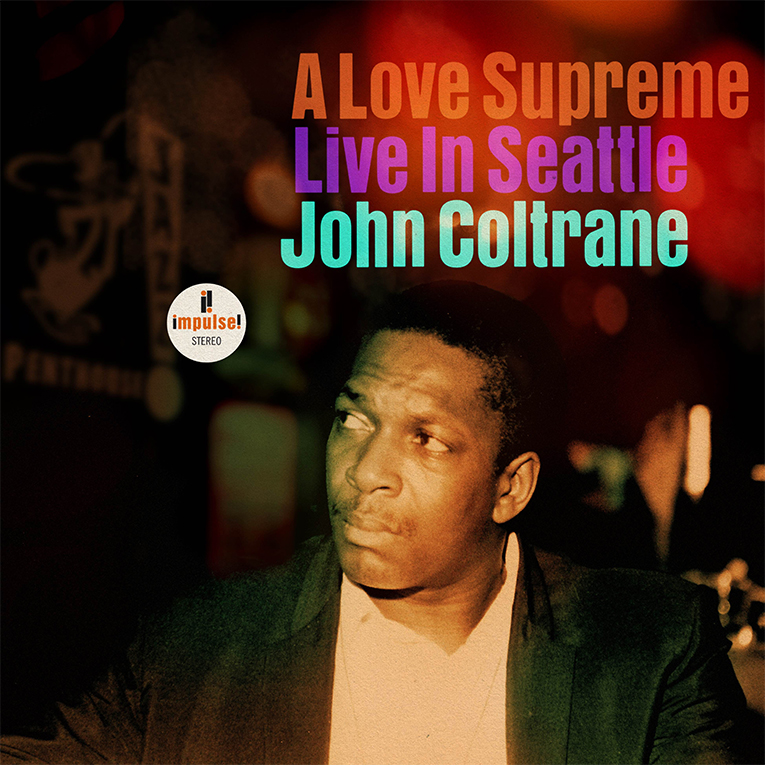 As well as creating additional sonic possibilities, the extra musicians generated a communal spirit, and that is much in evidence during the opening moments of “Acknowledgement,” the first movement of the suite. With the sound of bar patrons settling down in the background, the bassists play a series of figures and various percussion instruments are scraped and shaken. Out of this rises the steady tone of a cowbell—Coltrane setting the tempo, which Garrison picks up; the first indication that the audience is about to experience something special.

While Coltrane’s eventual entry on tenor triggers the same frisson as it does on the studio recording, it also generates some disappointment. The owner of The Penthouse frequently recorded the artists he hired, and to do so he had suspended two microphones above the stage, running their leads back to an Ampeg reel-to-reel recorder in his office. This provided a relatively natural-sounding soundstage, but the setup didn’t allow for directly miking the saxophones. So, while Coltrane, Ward, and Sanders are highly audible in the left channel, they are never louder than Tyner’s piano on the right.

What is lacking in volume is more than compensated for with energy. Coltrane sounds fiery and focused, and the contrast between his full-bodied tenor and Ward’s acerbic alto is not as stark as it sometimes could be with his invited guests. For those familiar with the chaotic free-for-all from Temple University, recorded in late 1966, shortly before Coltrane’s death the following year, these Seattle tapes do not come across as a mismatch between the mighty Trane and some dude who just wandered onstage with his sax. Ward holds his own, and leads into a long, roiling solo by Jones.

Another sonic quibble: in 1965, Jones was still playing a rudimentary drum kit, and on solos as extended as this one you long for one of those gorgeous, finely tuned kits he played in his later years.

During their week at The Penthouse, Coltrane’s group also recorded a two-LP set that was issued in 1971. It was a memorable album for the level of ecstasy that Coltrane and Sanders achieved—both on their horns and in their vocalizing. Rumors persist that Coltrane and Sanders experimented with LSD while they were in Seattle, and there is little to dispute that on the 1971 Live in Seattle.

While Sanders doesn’t howl or chant here, he does reach for the same type of release on his saxophone, playing short bursts of notes that twist, repeat, and twist again. It’s more pure expression than musical exploration—urgent exclamations rather than prayerful introspection.

Sanders’s urgency ushers in a very fast, exceptionally varied feature for Tyner, supported by Garrison, who follows with his own highly creative solo, showcasing his love of chordal playing in the style of a flamenco guitarist.

“Psalm,” the closing movement of the suite, remains one of Coltrane’s greatest moments as a composer. There is something in the combination of his horn, Jones’s mallet-playing, and Tyner’s dark chords that touch the soul. It is universal music.

More than 55 years after A Love Supreme was first released, altering the way many understood jazz, Coltrane’s masterwork still holds the power to enthrall. This is far from a pristine version of it, but it’s an important aural document—both for bringing to light something completely unexpected and for capturing a legendary band in the midst of transformation.