Nat "King" Cole: "The Very Thought Of You" 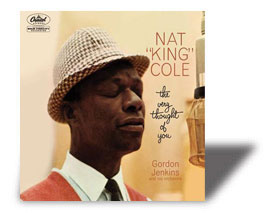 Nat "King" Cole Sounds Better Than Ever in Three-Track Sound

Nat “King” Cole enjoyed great success as a jazz piano player fronting his own trio, but in the late ’40s he began to focus more on singing. He eventually became one of a handful of superior singers of romantic ballads. 1957’s Love Is the Thing cemented Cole’s new persona with such massive hits as “When I Fall in Love” and “When Sunny Gets Blue.” Countless artists have recorded “When I Fall in Love,” but Cole’s version is always the first to come to mind. The orchestrations by Gordon Jenkins utilized strings, brushes, and bass. The album was recorded for Capitol Records, which had just installed stereo equipment in its studios, and Cole’s set became one of the first to be released under the banner “Capitol Stereo: The Full Spectrum of Sound.”

The success of Love Is the Thing cried out for a sequel. So in 1958 Capitol released The Very Thought of You, once again with Jenkins and his string orchestra. And once again, the disc produced hits, including the title song, “Impossible,” as well as “Magnificent Obsession,” “For All We Know,” and “There Is No Greater Love.” Cole is arguably at his very best in these landmark sessions. His voice had lost the slight roughness of the previous album (and perhaps a little edge as well), and he was a long way from the damage of smoking that would claim his life in 1965 through lung cancer. (According to biographies, Cole smoked Kool cigarettes heavily and would always puff on a couple before recording sessions, as he believed they enhanced the sound of his voice).

The Very Thought of You sessions were recorded in both mono and stereo, with a three-track master tape also being produced. Analogue Productions, usually quite thorough in its transfer of earlier recordings to SACD, has provided all three formats for a total of 32 indexed tracks. There have been a few compromises due to the space limitations of SACD (perhaps Analogue Productions will look into Blu-ray Disc for future releases). The CD layer offers only the stereo mixes, without any mono, and the SACD stereo layer presents those same stereo mixes plus the monaural ones. The multichannel layer offers the three-track masters. My player defaulted to these, and they ended up being my own personal default as well. With the strings arranged across a wide stage behind the singer and the center channel carrying Cole’s vocals and the brushed drums, with just enough bleed into the left and right to avoid the compartmentalized feeling of multitrack mono, these tracks offer ultimate clarity, and they best present Cole’s sumptuous vocals with all their subtleties. The multichannel tracks also have more bass, which is well focused and has appealing presence without ever becoming overbearing. The ultra-realistic strings set the stage for each song, and when Cole enters it’s almost like he walked into the room. You come away from hearing this disc with respect, not only for the great singer but also for the pioneering engineers who caught everything in transparent sound that has been equaled, but unsurpassed, to this day.

Be sure to listen to: Track 12, “Cherchez la Femme.” After a gorgeous intro for the cellos, the song settles down to Cole, the bass, and the drums in the center. The upper strings add comments left and right. Catch the presence and clarity of the vocals, drums, and bass. This is tangible sound you can wrap your ears around. In short, it’s perfection.