Nina Simone: "Fodder on My Wings"

Seventeen years after her death -- from breast cancer at the age of 70 -- pianist/singer Nina Simone remains one of the most misunderstood musicians who achieved the peak of their popularity in the 1960s. Posthumous books, films, and articles have shed some light on her bipolar disorder and the rages, rants, and other related behavior that often made headlines. We now understand how the course of her career was altered, and her view of racism hardened, by her inability to step as easily as white peers did from studies at the Juilliard School in New York City into a life as a concert pianist.

What we continue to struggle with, though, is her artistry, and how it stands apart from her colorful -- and frequently extreme -- life as an artist. Simone was certainly no more troubled than musical colleagues like Miles Davis, Charles Mingus, or Sly Stone, all of whom struggled with mental issues, acted out violently, and threatened to derail their own careers. And yet, like Judy Garland, Simone’s non-musical behavior has come to overshadow the legacy she left in recordings. In retrospect, we have focused on how racism shaped Simone’s life but ignored how we might view her had she been male. Righteous anger was not an attractive feature in a black woman.

Like so much in life, it’s complicated. Simone has been feted as “the High Priestess of Soul” and celebrated by feminists for daring to fight against the male-dominated system, stand up against male producers like Creed Taylor, or even threaten white men in her audience. Young women play Simone’s music alongside Aretha Franklin, Joni Mitchell, and Miriam Makeba, holding her up as a forerunner of contemporary women artists. But in their embrace of her there’s a certain amount of obfuscation, too. Rather than setting her music apart from her life -- and hearing her in the same distanced way we listen to Davis without consciously acknowledging his abuse of women, erratic behavior, and anger toward the white establishment -- we have collectively made her into a tragic figure.

Recorded in 1982, shortly after Simone moved to Paris, where she would live for most of the final 20 years of her life, Fodder on My Wings makes that distancing a challenge -- considering she sings with dense autobiographical detail about dancing naked at a Liberian nightclub and details the death of her father -- but judging her fairly demands that we go beyond those inward-looking turns and treat the recording the same way we would any other work of art.

Fodder on My Wings has a twisted history, but this Verve/UMe download is the first time a high-resolution version of all tracks has been available. Produced by Yves Chamberland and Giancarlo Cerri at Chamberland’s Studio Davout -- where artists as diverse as Keith Jarrett and Rihanna have recorded -- the album was released in 1982 on the French Carrere label, Simone’s first commercial release since the acrimonious Baltimore was made with Taylor in 1978. In the digital age, it was re-released by CY Records in 1988, and then by the American boutique jazz label Sunnyside in 2015. Even the album’s title is problematic, considering that it differs from the title of her song “Fodder in Her Wings.” It’s possible that the album’s title was a victim of poor translation that has continued through various reissues. 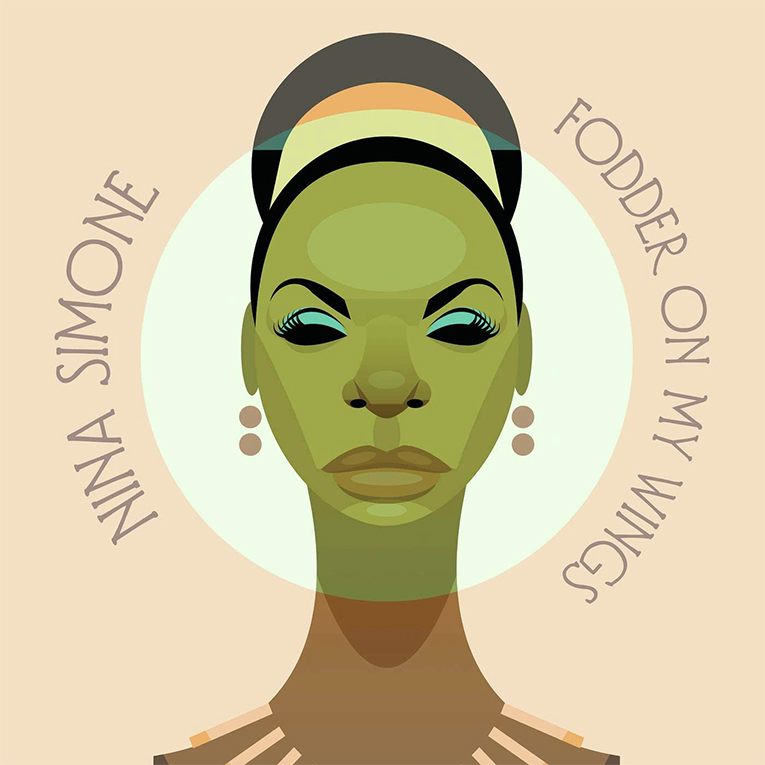 As Sheldon Pearce wrote earlier this year on Pitchfork: “Even in Simone biographies, Fodder on My Wings is usually represented as an outlier in her career.” Not only does it stand apart for being recorded for an obscure label, but it was remarkable for its spare setting -- for the most part, just Simone on piano and vocals, Sylvin Marc on bass, and two African percussionists, Paco Sery and Sydney Thiam. After Baltimore, which she considered a disaster with Taylor for his CTI label, Simone wanted to make it clear that Fodder on My Wings had been conceived and directed by her. Her songs. Her choices.

It begins with the driving calypso “I Sing Just to Know That I’m Alive,” which adds a horn section behind Simone’s short, exuberant tribute to Trinidad, part of her escape route from life in the United States. More shouted than sung, her performance shows that she had completely embraced the full complexity of her voice and what she called its “gravel.” It was a huge instrument, and while her extensive musical training gave her the inner ear to sing “sweet,” that concept became anathema to her, just another indication that the music industry wanted to break her and force her into the pigeonhole previously filled by Billie Holiday and others. Part of escaping her previous life meant turning her back on all that and discarding those expectations.

At a time when African music was beginning to gain more traction with Western artists like David Byrne, Brian Eno, and Paul Simon, Simone’s decision to include a broad range of African rhythms and horn backgrounds in songs like “Vous êtes seuls, mais je désire être avec vous” put her in the forefront of a movement that would sweep past her and give birth to younger artists like Angélique Kidjo, who would move to Paris a year after Simone recorded this album. “I Was Just a Stupid Dog to Them” has a hard-grooving momentum that belies the harsh title, although it gives added power to her closing refrain, “Now everything will change.”

In a very different African vein, she reclaims “Balm in Gilead,” one of the songs included on Baltimore. Although she had performed the song prior to working with Taylor, her experience with the producer soured her on it until she could resurrect it with French lyrics and a feel that returns it to its African roots. She also takes another traditional African song, “Heaven Belongs to You,” and transforms it into a lively call and response exercise with Sery and Thiam, which also provides a great showcase for her piano playing.

As smitten as she was by Trinidad, Africa, and France, Switzerland did not impress her, and she sings in French of the cold detachment of the Swiss people she encountered -- a soaring art song with an uncredited trumpet cadenza accompaniment. She also expresses her dislike of Stephen Sondheim’s 1973 song, “Send in the Clowns,” although the puckish tone she assumes on “Stop” shows no malice, particularly for a woman most famous for excoriating songs like “Mississippi Goddam.”

Whatever her rationale for disliking the Sondheim composition, it’s odd considering her decision to use Irish singer Gilbert O’Sullivan’s maudlin “Alone Again (Naturally)” as a vehicle for a multi-layered set of lyrics about her father. While O’Sullivan’s 1972 original -- a massive worldwide hit -- was a straightforward folk ballad featuring acoustic guitars, Simone introduces her version with a pointillistic piano introduction that sounds like stereotypical “Asian” music circa 1940s. That almost comical refrain stands in stark contrast to vitriolic lyrics that express her joy that her father is “dying alone, naturally.” As a synthesized string section enters, the tone shifts to a much deeper examination of her feelings, and an ending that’s as thought-provoking and universal as that Sondheim classic she professed to hate. It’s perhaps this album’s best example of what makes Simone such a singular and enduring artist; she’s coming from a place no one else seems to have been, and creating a song that no one else could’ve imagined.

Even with the additional tracks, Fodder on My Wings is only 45 minutes long -- a concentrated burst of the music Simone was writing and feeling at the last major turning point in her life. Ahead lay an increasingly rough road -- a period that The New Yorker called “a tale of escalating misery” -- marked by highs like a week of headline shows at Paris’s Olympia theater in 1991 and lows like her air gun attack on a young neighbor who disturbed her in 1995, and the self-immolation of her Paris house. Those highs and lows, like those that marked her earlier times as a rising star in the US, are the facts of her life. Those facts are history; her music endures in the present.