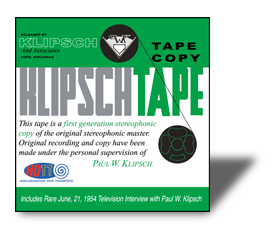 Paul W. Klipsch (1904-2002) was one of the most important pioneers in the history of audio reproduction. So was John Eargle (1931-2007). The two giants crossed paths in the early 1950s when they were just starting out. Klipsch initiated his speaker manufacturing company in 1946, which makes it the oldest company still making the same model (and many, many more). He hired his first employee in 1948, and by the early 1950s his Klipschorn speaker had become a symbol of excellence in the audio community. His folded horn, designed to be placed in the corner of a room, was big and expensive. I remember it being something of a status symbol. I had one friend in high school, a Canadian transplant, whose Dad had a pair of the monster speakers and a few of us would go listen whenever we could. At that time I preferred Tannoy speakers, but I remember that the Klipsch sound was clean and clear, perhaps a tiny bit too forward, and big with lots of bass!

At that time there were no stereo discs and LPs were monaural. But there was stereo from commercially recorded two-track tapes. RCA had them, and so did Mercury, EMI, and a few other companies. With his forward thinking and exacting taste, Klipsch thought to make his own stereophonic tapes, mostly to have some reliable software to demonstrate the abilities of his Klipschorns. His tapes were made at 15 inches per second (ips) to achieve the highest fidelity possible, and the first ones were sold in 1954. Within about two years he'd stopped making them.

Recently, Klipsch and High Definition Tape Transfers made a deal to produce a sampler with the best of the Klipsch recordings. The master tapes were in miraculously good shape, so Bob Witrak of HDDT transferred them directly to digital and is offering them as 16/44, 24/96 and 24/192 downloads, and on CD, HQCD, and 24/96 DVD. The result sounds as much like a demonstration disc today as it did 59 years ago. There aren't any hokey ping-pong stereo demonstrations. The program is all music and presents selections from KlipschTape KST 1000, Demonstration Tape, with introductions by John Eargle; KST 1002, An Organ Recital by John Eargle; and KST 1001, Flem Ferguson and His Dixieland Jazz. The disc formats all include the entire 13 tracks, but if you download you can pick and choose from among the three programs and the closing interview.

John Eargle? Yes, that John Eargle, who went on to become a legend himself at JBL and Delos Records. But Eargle was also a very fine organist, and his portion of this tribute is very strong. The Toccata section of Bach's Toccata and Fugue in D Minor receives an excellent performance, but it's the recording of Jehan Alain's dramatic Litanies that is exciting to the max and completely satisfying, both in sound and performance. Eargle played on a large Aeolian-Skinner organ in Texas, and its different choirs of pipes were situated left and right of the performer so it's ideal for stereo. And the stereo separation is amazingly good, with a solid phantom center channel and bass that would have been achievable back then on only a 15-ips tape.

The Dixieland jazz sounds great, too, with all the instruments evenly spread from left to right, again with a strong phantom center channel. In short, these tracks don't sound at all experimental, they sound like tracks that were produced with an honest effort to sound like the original instruments. HDTT includes the original notes by Klipsch, and you can easily read that he eschewed any unnecessary fiddling around. He was bent on getting the most natural sound possible. He succeeded.

Whatever format you choose, one can't help marveling at these early efforts by two men who would become legends in the industry. Talk about a good start!

Be sure to listen to: Track 2 of Demonstration Tape presents "The Yellow Rose of Texas" played on a Wurlitzer pipe organ. Note how clean the opening drums and pipe stops are and how the recording has not only stereo spread but also very fine depth. As a bonus, there's a 1954 television interview (audio only) with Klipsch that's a lot of fun.

Find out more about HDTT's released of KlipschTape at their site.