Uni Boys: "Do It All Next Week"

Uni Boys is a rock’n’roll quartet from Southern California whose crunchy, guitar-based power pop combines sophisticated songwriting with garage-band edginess. The group recorded two DIY albums that gained a following and impressed Los Angeles label Curation Records, which intended to give those recordings an official release. The group instead persuaded the label to release an album of new recordings, and Do It All Next Week hit streaming services a couple of months ago. Vinyl and CD releases will follow this month.

Guitarists Noah Nash and Reza Matin play parallel lead-guitar lines on “You Worry about Me,” with drummer Arthur Fitch behind them keeping precise time on the fast-moving tune. Michael Cipolletti’s snappy bass lines help keep the energy level high, and Nash takes the lead vocal. Matin joins him on harmonies for the chorus, and a couple of Beach Boys–style “woo-woo” interjections give the song a glossy sheen. Nash and Matin fire off brief, ripping solos on either side of a riff-filled bridge, and the song closes after two more passes of the chorus. All this activity occurs in 2:18, but the song doesn’t feel rushed or overstuffed.

The Uni Boys’ melodic, hook-filled songs are adorned with great guitar sounds. Matin’s “Long Time No See” is built around a memorable opening chord sequence and features a relaxed, tuneful vocal from Matin. The guitar chords take some unexpected turns, with richly done harmony vocals filling out the arrangement and highlighting the song’s bouncy melody. “One More Night” opens with a simple but ear-grabbing riff that Nash and Matin play in tandem, and Matin’s bright, jangly overdubbed guitars in the right channel play against Nash’s chugging chords in the left. The handclaps added by the band in the second verse are an inspired touch, as is the arpeggio that closes each chorus. 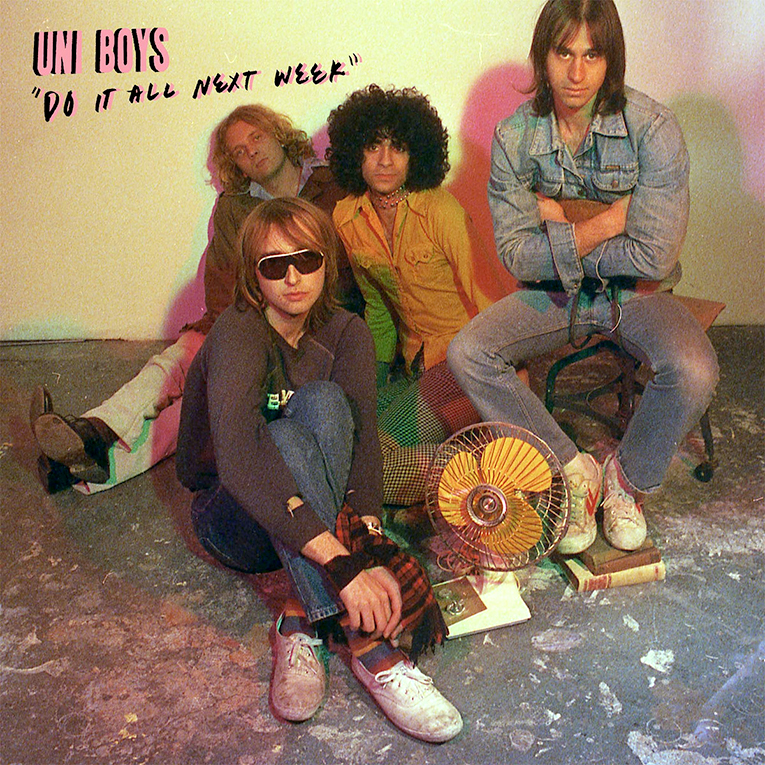 Nash and Matin are both skilled guitarists, and while their solos are brief, they are incisive and effective. They play for a couple of bars and get out of the way. The solos match the compressed force and excitement of the songs, nearly all of which clock in at under three minutes. Their chord choices lean toward the middle and higher registers on the guitar, which give the tunes a bright ring, and they create unique guitar riffs that pull the songs together. Any fan of hard-edged guitar rock will find it hard to resist the opening riff and slashing guitars on “You in My Heart.”

Cipolletti is a recent addition to the band, and a vital one. His inventive bass lines keep pace with the demands of the songs. Fitch is steady, precise, and unfussy on drums. He never calls attention to himself, but his drumming is vigorous and gives the music a solid foundation. Both players give themselves over to the songwriting visions of Nash and Matin.

The Uni Boys mixed Do It All Next Week on a laptop, and I thought the sound was surprisingly good when played through my system. The many different guitar tones registered cleanly, the bass had plenty of pop, and the drums were solid and resonant. The vocals were focused, and the harmony vocals were well placed. Nick Townsend, who has worked on recordings for many indie bands, has done a fine job mastering the recording to give it a consistent feel.

Although I heard various influences on Do It All Next Week—the New York Dolls, a bit of Big Star, lots of the Flamin’ Groovies—Uni Boys has a strong songwriting identity. The band also knows how to arrange and present its music. The album is filled with examples that show an impressive command of studio techniques. A major label would be tempted to put the group in the hands of a seasoned producer. On the evidence of Do It All Next Week, I’m not sure Uni Boys need one.