Various Artists: "Here It Is: A Tribute to Leonard Cohen"

In September, at a New York City event to promote his new autobiography, Rolling Stone cofounder and longtime publisher Jann Wenner responded to a question posed by host Bruce Springsteen: Who did he regret never interviewing for the magazine? Wenner didn’t hesitate: “Leonard Cohen.” After a pause of a few seconds, he added: “And Elvis.”

Anyone who has followed Cohen’s lengthy career might well imagine the diminutive Canadian laughing at the thought of Wenner—whose interviews with John Lennon and Bob Dylan helped set the tone for music-celebrity dialogues—putting him at the top of his list alongside The King.

Although Cohen was already respected by music critics before his late-career comeback—a move that was necessitated by the loss of his life savings to his business manager—he was never exactly treated with the same reverence as Presley. Early in his music career, Cohen was best known as the composer of songs performed by artists like Judy Collins, and as he aged, he only drew media attention if he did something out of character—such as recording his 1977 album Death of a Ladies’ Man with producer Phil Spector.

If Cohen was never the subject of what Wenner came to call the Rolling Stone Interview after the success of his conversations with Lennon, Dylan, and other ’60s icons, it’s likely because he was never asked.

But death—especially when it comes at the end of a long career—has a way of making people pay attention to artists who were chronically undervalued. Although Cohen never maintained a large fan base outside of his native Canada and parts of Europe, singers always loved him—recognizing him for the poet that he was. Even Dylan, who occasionally sparred jokingly with Cohen over the craft of songwriting, acknowledged Cohen’s genius, noting that the merit of his friend’s musical composition was unfortunately overshadowed by the exceptional quality of his lyrics.

Both Frisell and Wilkins lead their bandmates through rich instrumental versions of Cohen compositions—“Bird on the Wire” and “Avalanche” respectively. Frisell’s interpretation of the song that Cohen traditionally used to open his concerts will be familiar to anyone who’s heard the guitarist’s recordings of pop or folk material. Frisell has a distinctive approach to revoicing well-known songs, and the melody—which Cohen admitted he may have unintentionally purloined from Nashville songwriter John D. Loudermilk—lends itself well to Frisell’s style. For “Avalanche,” Wilkins, Frisell, Hays, Colley, and Smith turn up the heat, transforming the piece into a contemporary jazz romp with a tumbling rhythm bed percolating under Wilkins’s blurry-sounding alto sax.

As for the vocal interpretations, they begin with Jones, whose lush, Southern-inflected purr is about as far as one can get from Cohen’s raspy tone. For those who can only associate Cohen’s more desolate songs with a voice like his, there’s Iggy Pop—perhaps the only living singer who can deliver “You Want It Darker” with the same gravity and commitment as its lyricist did on his final album.

Gabriel goes dark, as well, with a gruff interpretation of the title song that meshes his whispered intimacy with Wilkins’s plaintive alto and a highly atmospheric backing by Frisell, Goldings, and Leisz. 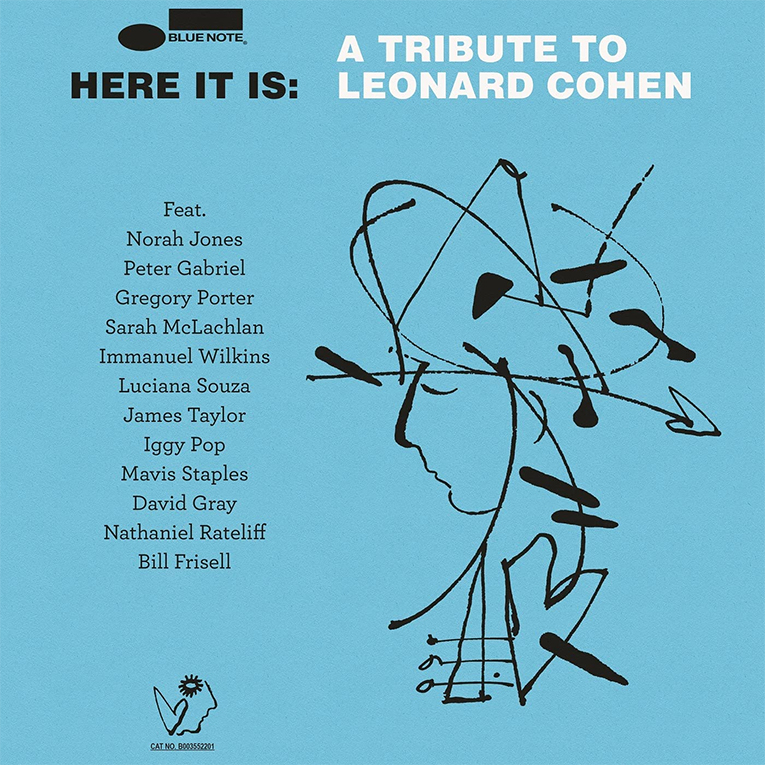 It falls to Sarah McLachlan to scale the dramatic heights of “Hallelujah,” and she chose not to follow fellow Canadians Rufus Wainwright and k.d. lang into operatic territory. Some may well find her interpretation underwhelming for that reason, but she delivers a pleasant version of a song that perhaps deserves to be put in storage for a few years.

Although Klein says he let some of the singers choose their own material, the album bears a credit for “pre-record vocal guidance” and it’s natural to believe that he may have assigned specific songs to lesser-known contributors like David Gray and Nathaniel Rateliff. Their unique timbres and style add depth and character to Gray’s interpretation of “Seems So Long Ago, Nancy” and Rateliff’s world-weary delivery of “Famous Blue Raincoat.”

Like Gabriel, Taylor is a peer of Cohen, and his gentle version of “Coming Back to You”—spiced with a gorgeous Frisell accompaniment—sounds like a love letter to an old friend.

Perhaps it’s natural for the “pure” jazz singers—Souza and Gregory Porter—to take more chances with the material, and the results are mixed. Souza’s version of “Hey, That’s No Way to Say Goodbye” sounds like it’s taken at too fast a tempo, and some of her phrasing choices are a bit jarring. That said, Wilkins takes a lovely solo—reminiscent of the time Sonny Rollins joined Cohen for a televised performance of “Who by Fire”—and the band delivers a sublime-sounding coda. Porter delivers one of the two highlights on the album—a subdued performance of “Suzanne” with a guitar, piano, and bass accompaniment that put me in mind of some of the more urbane Southern-soul music made by artists like Joe South. It’s difficult to breathe new life into a song as familiar as this, but Porter and the core quintet succeed.

The other highlight belongs to Staples, who delivers a spectacular version of “If It Be Your Will.” Wisely, Klein pares the arrangement down to its bones, allowing Staples’s powerful voice to carry the song.

“High concept” tribute recordings like this were once a specialty of Blue Note, and at times—prior to the ascendancy of Don Was to the presidency of the label—those albums didn’t add much to the material. Here It Is: A Tribute to Leonard Cohen fulfills its potential and is a fine example of what artists like Frisell and Staples can bring to other composers’ music.