Ethan Iverson: "Every Note Is True"

This year marks a milestone anniversary; I’ve been writing about music on a regular basis for 30 years. Over that time, it’s likely I’ve encountered pianist Ethan Iverson more than any other artist, with the possible exception of trumpeter Dave Douglas. I caught Iverson with The Bad Plus many times during his tenure with the trio, sat on a panel discussion with him at the Portland Jazz Festival, shared the pages of DownBeat with him in his guise as a part-time music critic, and interviewed him for insights on topics as disparate as the late Andrew Hill and the state of jazz education. I’ve even seen him sit in on drums, fuelled by numerous martinis, at a jam session.

That last experience aside, Iverson is a singularly focused, serious scholar of the history of jazz who writes almost as well as he plays. Since appearing on the scene, he has displayed a vast curiosity—embracing a range of music from The Bad Plus’s bombastic, improvised pop remakes to contemporary classic composition. Above all, he’s delved deeply into explorations of jazz, with a penchant for embracing and promoting the music of artists from the postwar era who never achieved the recognition awarded to household names like Miles Davis, Herbie Hancock, and Wynton Marsalis. He has lent his talent to bands led by drummers Billy Hart and Albert Heath, and recorded music inspired by the reserved fire of saxophonist Warne Marsh.

It seemed inevitable that Iverson would, one day, find his way to Blue Note Records—both because of the label’s legacy as a home for creative artists and because he seems to be the kind of quirky polymath that Blue Note head Don Was loves.

As odd as it might seem, Iverson caught a break when the COVID-19 pandemic forced the music industry to grind to a halt. Suddenly, almost every working musician—regardless of stature—was stuck at home without a gig to play or a plane to catch. For his Blue Note debut, that meant Iverson was able to snag drummer Jack DeJohnette and bassist Larry Grenadier, an A-list rhythm section in anyone’s book. Both musicians combine exceptional imagination and technique, ideal for Iverson’s plan to bring some compositional sketches to the studio and turn his bandmates loose.

Each player has a highly developed, individualistic voice. Although he has played everything from the hard-charging electric funk of Davis’s early-1970s bands to his own knotted and multilayered compositions, DeJohnette is best known for the elegant, spectral accompaniment he brought to pianist Keith Jarrett’s so-called Standards Trio. Grenadier has lent his highly resonant, textured playing to leading improvisers like Pat Metheny, Chris Potter, and Paul Motian, but he’s most closely associated with pianist Brad Mehldau, whose band has helped define the landscape of the modern piano trio along with The Bad Plus—even though these two bands are polar opposites. 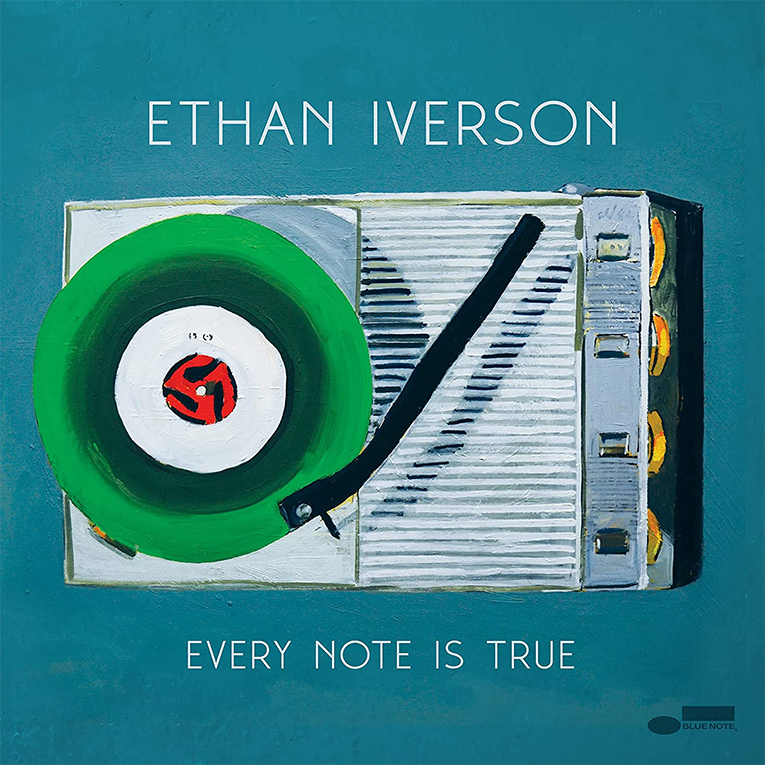 As contemporary pianists, the sonic territory occupied by Mehldau and Iverson couldn’t be more different. While Mehldau favors long, flowing lines redolent of Jarrett’s more lyrical work, Iverson is more strongly rooted in the fractured piano language, driven by internal logic, that was developed and refined by Thelonious Monk, Herbie Nichols, and Hill. His approach, which sometimes veers toward whimsy, is also organically influenced by some of the rhythmic conceits followed by peers like Vijay Iyer and Jason Moran, as well as by his own interest in dance, theater, and the written word.

Every Note Is True begins in that alternate territory, with Iverson pulling together 44 voices—each recorded remotely—into a pandemic chorus for “The More It Changes.” The short composition draws deeply on Americana, with lyrics by Iverson’s wife, Sarah Deming; a powerful polymath in her own right.

Deming’s mother inspired the first trio performance, which has a dominant processional feel—a stately progression that Iverson plays with a formality reminiscent of Oscar Peterson’s spirituals. As the piece opens up, DeJohnette nudges the pianist into some more forceful playing, and the energy builds and then resolves into a return to the introductory mood.

Iverson’s soft-spoken, wry demeanor can make you forget that he can be a muscular force at the keyboard; an ability that made him an effective foil for The Bad Plus’s locomotive drummer, Dave King. The pianist’s brawny side comes out on his composition “She Won’t Forget Me,” drawn to the compelling ostinato laid down by Grenadier.

A piece dedicated to children’s author Ellen Raskin sounds like the most fully realized of Iverson’s hopes for how this trio would sound as the members extrapolated and improvised on one of his compositional ideas. The opening sounds like music written for a choreographer (I hear a nod to Leonard Bernstein’s score for “Somewhere”), and the piece provides ample space for Grenadier and DeJohnette to add flavor. The bassist responds with a gorgeous counterpoint to Iverson’s playing. After the drummer provides some dramatic flourishes and Iverson builds tension, the pianist takes it out by himself; an ideal bridge to a strong rendition of DeJohnette’s “Blue,” which begins quietly but grows to a bristling climax.

“Goodness Knows,” with its roots in stride piano, and Iverson’s through-composed solo piece, “Had I But Known,” provide two opposing views of Iverson’s capacity for swing and grace.

The closing three Iverson compositions—“Merely Improbable,” “Praise Will Travel,” and the long, loping blues of “At the Bells and Motley”—provide an exceptional showcase for the trio’s dynamic and, in particular, DeJohnette’s ability to simultaneously swing and play free. As noted, Iverson’s drummers have often been restrained stylists like Heath and Hart, or powerhouses like King; seldom has he worked with a percussionist who can create in as many directions as DeJohnette. On “Merely Improbable,” DeJohnette displays his mastery of the cymbals, splashing colors around Iverson’s Monkish phrasing and Grenadier’s sturdy lines. On the final two pieces, the drummer illustrates his characteristic liberated swing—never letting you forget the tempo in spite of engaging in unexpected forays into free time.

Recorded by Andreas Meyer at the Clubhouse studio in upstate New York, Every Note Is True has a splashy, live sound that allows Iverson’s piano to ring out a bit too much for my ear. Your taste may vary; I admit to a preference for a drier sound in a piano trio setting.

The pandemic continues to give birth to unusual projects that might not have happened in normal times. Whether Ethan Iverson can persuade Jack DeJohnette and Larry Grenadier to make time for him again is anyone’s guess; but if this album stands as a one-off COVID-19 quirk, it will at least be one of the most tuneful to be spawned by the lockdown.